Coming to a theater near you! So how good do you think you are at Minecraft? Are you good enough to go up against an entire theater-full of players?

Here’s your chance to find out, grasshopper. Super League Gaming is partnering with theaters across the country to host a series of big-screen competitive Minecraft games. Players (and watchers) of all ages are invited, as long as they can provide a charged laptop equipped with Minecraft 1.8 or greater.

According to the website, the theaters involved are Regal Cinemas, AMC, Cinemark, and iPic. The games feature all that you would expect from a movie theater, giant screens, epic sound, and of course, as the video above is sure to mention, popcorn.

You will want to grab some friends, though. The weekly competitions are team-based, with the current high score, as of this writing, held by Daddy’s Darlings.

Super League Gaming markets itself as “the world’s first recreational video game league in a cool movie theater”. Emphasis is placed on fun and entertainment, not (at least by the League itself) on victory and competition. I can’t make any guarantees about your enemies, though. 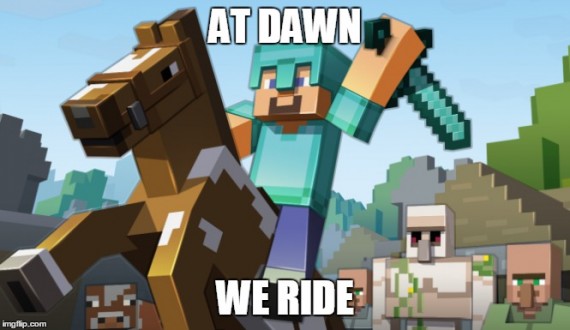 Whether you’re interested in competing, watching, or in avoiding that particular theater that day, tour dates can be found here.