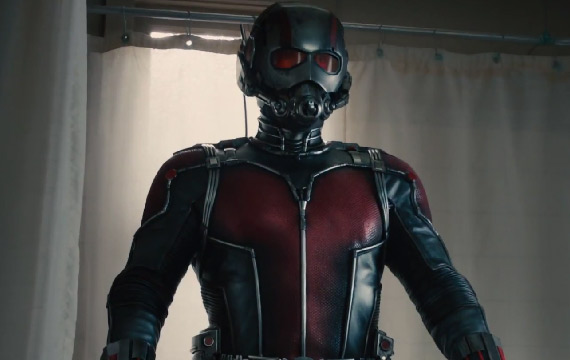 The first clip from Marvel’s upcoming film Ant-Man has been released, showing Paul Rudd as the tiny hero, trying on the famous suit for the first time.

The new clip of the movie, headed to theaters in a couple of weeks, shows Scott Lang shrinking down for the first time, with near disastrous results. With the click of a button or two, he quickly learns that small doesn’t necessarily mean weak, but it does mean the bathtub is no longer your friend.

Watch the clip and read a short description of the film, per Marvel, below:

Ant-Man follows the story of thief Scott Lang (Paul Rudd), who must aid his mentor Dr. Hank Pym (Michael Douglas) in safeguarding the mystery of the Ant-Man technology (which allows its user to decrease in size but increase in strength) from various threats and plot a heist that will save the Earth.

In addition to Rudd and Douglas, the film stars Corey Stoll as Darren Cross/Yellowjacket, Evangline Lilly as Hope van Dyne, Bobby Cannavale as Paxton and Michael Pena as Luis.

In case you haven’t seen the full trailer yet, you can do that here.

Make sure to catch Ant-Man when it opens in theaters July 17!

Ben Affleck and Jennifer Garner Split After 10 Years of Marriage

Is a Same Sex Couple Headed to 'The Vampire Diaries' Next Season?