GalaxyQuests! Not the plural form of the movie… but like quests… in the Galaxy… nevermind…

In last Thursday’s Weekly Update, everyone’s favorite studio named after a stretchy cord announced that their upcoming September expansion, The Taken King, will dramatically re-vamp the mission structure of the game.

The original game release last September comprised of missions, bounties, strikes, and a raid. Missions and strikes (excepting the versions of the latter in the Vanguard playlists) primarily pertained to the story or to side plots of the story. Bounties were small missions within missions (yo dawg I heard you like missions…) or PvP goals, and the raid was the capstone cooperative contest of the game. As Luke Smith, Bungie’s Creative Director, stated, the closest thing to quests in the vanilla release were the exotic bounties, wherein your guardian completed several distinct stages to unlock a powerful weapon. 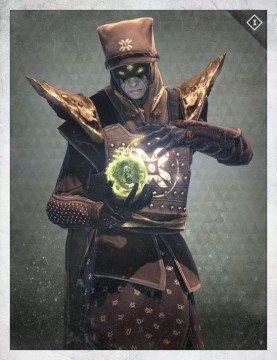 When Eris Morn came to town in the game’s first expansion, The Dark Below, Bungie came at players with a real version of a quest. The Dark Below’s storyline consisted of a series of quests leading up to the final mission of the DLC’s story, The Wakening, and to the game’s second raid, Crota’s End. These quests were tracked in the same part of the inventory screen as your other bounties.

The second expansion, House of Wolves, worked in the same way. Petra in the Reef gave you quests in stages, with rewards each time you turned one in.

Starting in The Taken King, it seems that more in-depth versions of these sort of quests will make up the main story of the game. According to Smith (who, by the way, STILL owes me a steak dinner from like eight years ago. I haven’t forgotten Lukems. Never forget.) “The Taken King was built with Quests in mind, but we didn’t want to ignore the Year One content in this global change. So as a part of this update, we’ve taken all Destiny content and – for lack of a better term – “questified” it”.

Quests will be tracked both from the new progress screen in the menu:… 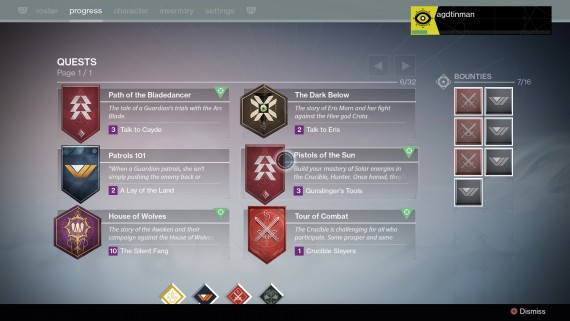 … and on your game screen, similar to traditional MMORPGs: 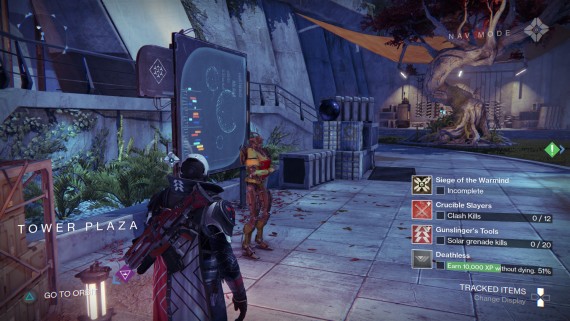 In case you’re worried, the expansion will also increase the amount of bounties that you can carry.

I can’t help but wonder if that quest tracker will get in the way during gameplay. Perhaps it will only show up in the Tower.

Your guardian’s rep with the various factions of the game will also be moved from the inventory screen to the progress screen.