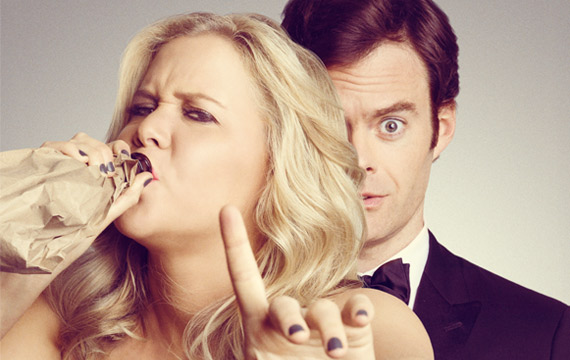 Amy Schumer and Bill Hader are an imperfectly perfect pair in the raunchy, fun romantic comedy Trainwreck, now in theaters.

The movie revolves around Amy (as Amy), a young woman who writes for at a sleazy magazine (aptly titled S’Nuff Magazine) who strongly upholds the belief that “Monogamy is not reality,” instilled in her and her sister (less successfully) at a young age by her dear old dad. Their parents divorced when they were young (we’ll just let you guess the reason behind it).

When we meet Amy, she has a fairly steady boyfriend, hilariously played by John Cena, but she still has her more-than-occasional romantic trysts on the side. She’s perfectly happy with her dating system, until one of her work assignments (Bill Hader) runs the risk of “ruining” everything. The movie was directed by Judd Apatow and written by Schumer (albeit with a fair share of amazing ad libbing thrown in), and it’s highly possible that these two are now my favorite behind-the-camera duo.

Let’s just get this out of the way: this film is hilarious from beginning to end. It’s a great play on the usual romantic comedy format. You know the one: Guy meets girl. Girl and guy fall for one another. Some terrible event happens that threatens to break girl and guy up (or does!). Guy does big romantic gesture to win girl back. Trainwreck follows this basic format, but turns it on its head by placing the girl in the traditional “guy” position, which means yes, there is a grand romantic gesture that happens… and it could be the greatest one I’ve ever seen from a male or female.

It’s refreshing to see a movie in which the main character is not only a woman, but one that can be completely comfortable with her sexuality. Although we see Amy go through a change in the film, it’s an organic change that she decides to make on her own, as opposed to outside forces making her feel like she has to change. There’s no slut-shaming, no name calling (unless it’s Amy referring to herself), there’s only a woman exploring dating in the same way that many men do on a regular basis.

Amy and Bill had surprisingly great chemistry. Just because comedians are funny on their own, doesn’t mean their styles will mesh well together, but that simply wasn’t the case in this film. Bill’s calm, subtle comedy was a great balance with Amy’s more crass, in-your-face style. The growth in their relationship throughout the film feels natural, unlike some rom-coms where the meeting and falling in love part happens in a matter of MAYBE 2 scenes. This is a pair I’d watch on-screen again and not necessarily just in a romantic capacity… it’d be just as much fun to see them play rivals.

The supporting cast more than held their own as well. From LeBron to John Cena to Tilda Swinton, everyone mixed in their own brand of funny resulting in one of the best rom-com’s I’ve seen in a WHILE. LeBron was great as himself. While you could tell he’s new to the whole acting thing, he still brought his own personal silliness to the screen and held up pretty well in scenes with pros like Schumer and Hader (who was his best friend in the film).

John Cena, an all-around good guy, was only in part of the film as Amy’s unfortunate boyfriend, but he definitely made that time count. Be on the look-out for a memorable (whether you want it to be or not) bedroom scene between he and Schumer. For a taste of what you’ll get from him in the movie, I’d highly encourage you to check out this featurette.

Tilda Swinton, who I honestly didn’t even recognize as Tilda Swinton until the end of the movie, gave a fun performance as Amy’s icy boss Dianna. Her abrasiveness and abuse toward her staff stole a lot of the office scenes as she played it up as the exact kind of person you’d think would have to run S’Nuff Magazine.

Trainwreck is a very different kind of romantic comedy, but it’s one that will appeal to everyone. It’s great if you’re looking for a fun date night movie and it’s the kind of film you can go see with your friends, male or female. Make sure to add this one to your must-see list for this summer.