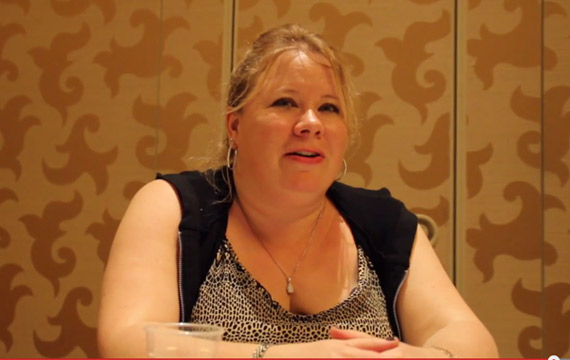 The Vampire Diaries co-creator Julie Plec is preparing to introduce fans to the show’s first season without Elena, but it sounds like there will be plenty of drama headed to our heroes way that may keep their minds off of the tragedy.

The EP, who attended Comic-Con this year with many of the cast members, revealed that this season of TVD could feel a bit more like The Originals than it has at any point in the past. Why? Because this season is all about family drama.

“Damon and Stefan are dealing with the fact that their mother, who essentially abandoned them, has now shown up in this town, in their hometown, with a group of people who she calls her family and that she calls her children, in a way that she doesn’t care for them,” said Plec. “They have to sit and watch as she and these kids take over their hometown, move into their house, and really live their lives in plain sight of our heroes. It’s emotionally incredibly frustrating and disappointing and it teaches them a lot about their relationship with each other, their relationship that they always wanted to get with her, then it puts them in a situation of are they going to make amends with this woman or are they going to take her down? I think that that, for the first half of the season, is the emotional foundation of the show for sure.”

While the Salvatore brothers are busy dealing with their mommy issues, Damon will also be dealing with losing the love of his life (for now), as will Bonnie. Both loved Elena dearly and forged their own bond last season as well, but now that Bonnie’s life is directly tied to her BFF’s eternal-ish slumber, Plec revealed that the Bamon friendship will be put to the test.

“Here’s the beauty of [Bonnie and Damon]: They went through such a unique experience together and they really have bonded. It’s like being stranded on a deserted island with somebody right? So, they hit it off, they shared something that nobody else could understand and they really, really found a deep friendship with each other, which is surprising considering how little respect they had for each other.

“Now, they still have that but there’s this underlying resentment on both sides. For Damon, he’s like making jokes about like ‘Oh Bonnie you’d better chew that sandwich well, because I’d hate for you to choke and die! I don’t know the Heimlich Maneuver.’ And she’s saddled with the guilt of feeling like ‘I’ve got my life, my friend doesn’t have hers and this asshole is making jokes about me choking on a chicken bone.’ They’re going to have to work their stuff out if their friendship is going to stay on track, they need to really work that out.”

Watch the full interview below to hear the rest of what Julie said about Mystic Falls’ fate, including the questionable way Alaric is dealing with his tragedy, in the upcoming seventh season:

The Vampire Diaries returns to The CW on Thursday October 8th.

New 'Fargo' Trailer Is a Murderous Blast From the Past

'Once Upon a Time' Star Lana Parrilla Talks Regina the Savior