Hold on to your childhood because one of its most iconic couples has just called it quits. Today, The Muppets stars Miss Piggy and Kermit the Frog announced that they are no longer in a relationship.

The pair made the announcement via their Facebook pages, posting similar messages to fans that read, “After careful thought, thoughtful consideration and considerable squabbling, _____ have made the difficult decision to terminate our romantic relationship. We will continue to work together on television (“The Muppets”/Tuesdays 8pm this fall on ABC) and in all media now known or hereafter devised, in perpetuity, throughout the universe. However, our personal lives are now distinct and separate, and we will be seeing other people, pigs, frogs, et al. This is our only comment on this private matter… unless we get the right offer. Thank you for your understanding.” 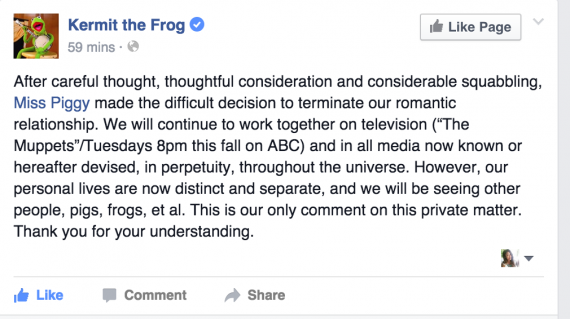 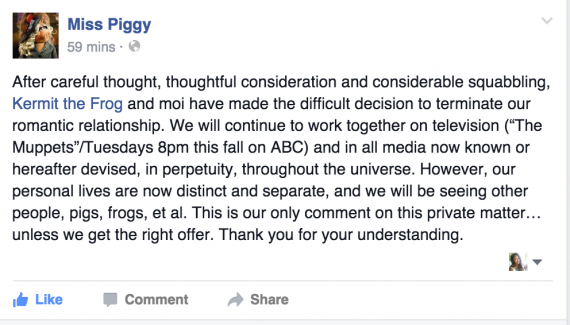 Now if you watched the trailer for the upcoming series, it definitely alluded to the fact that the pair hasn’t been together for some time.

This marks the third big Hollywood breakup this week, after Gwen Stefani and Gavin Rossdale as well as former One Direction-er Zayn Malik and his former fiancee Perrie Edwards have both announced they’re calling it quits.

See how the exes are getting along when The Muppets premieres on ABC, Tuesday Sept. 22nd.