Judging from Raven-Symoné’s latest social media post with her entire That’s So Raven crew, it looks that way!

Raven posted the picture of herself and her former co-stars Orlando Brown, Kyle Massey and Anneliese van der Pol, on her Facebook page with the caption “Wait till I tell you why we are all together!!!!!!!!”. 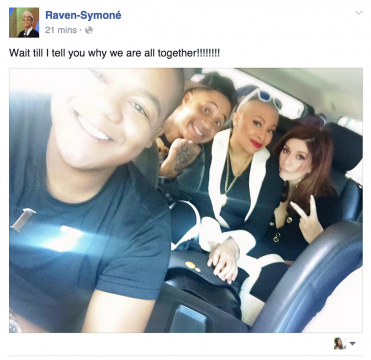 Of course fans are already speculating that a That’s So Raven reunion could be in the works, and with all of the reboots and revivals that are happening across film and TV, including Disney’s successful Boy Meets World revival, Girl Meets World, now would be the perfect time.

Since the show, the stars have all kept pretty busy. Raven is currently the newest controversial host of The View; Orlando has recently appeared in the NWA biopic Straight Outta Compton; Anneliese has made appearances in various projects and Kyle has appeared in hot FOX series Gotham and hit BET series Being Mary Jane.

Now if we DO get a That’s So Raven reunion, let’s hope they bring back other characters as well, like Raven’s boyfriend Devon who grew up to look like this:

Would you like to see a That’s So Raven reunion happen? Talk to us in the comments below!

Is a 'That's So Raven' Reunion Headed Our Way?