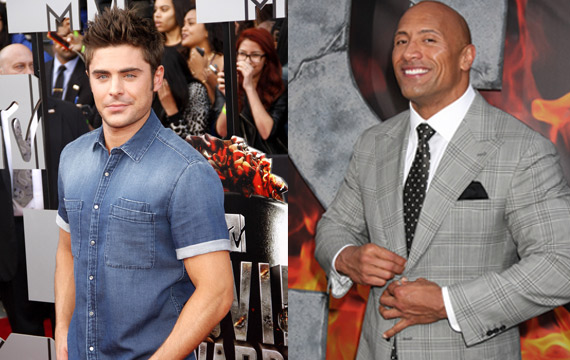 It’s a given that Zac Efron loves not wearing shirts. It’s also a given that most of us don’t mind. Now that the Hollywood hunk is reportedly in talks to star opposite Dwayne Johnson in Baywatch, we can look forward to lots more Efron ab-flashing in the near future.

The 27-year-old heartthrob could star opposite the wrestler-turned-actor in a new film adaptation based on the 90s TV series. Multiple outlets are reporting that Efron is currently in negotiations to take on the co-starring role, although no one in his camp has confirmed the news as of yet.

The comedy will follow a very serious and traditional lifeguard (Johnson) who is forced to team up with a young, rule-breaking hottie (Efron) in order to save their beach from an oil tycoon, according to The Hollywood Reporter.

Efron showed off his comedic chops opposite Seth Rogen in last year’s The Neighbors which, not only  was a hit with audiences, but also solidified the fact that he could hold his own in the funny department.

Efron’s next films, We Are Your Friends, directed by Catfish‘s Max Joseph, and the Georgia-filmed Dirty Grandpa, are scheduled for release in August 2015 and January 2016, respectively.

Production on Baywatch is slated to start in 2016.

'Empire', Amy Schumer and 'Better Call Saul' Among Those Honored at 2015 TCA Awards