The secret is out! Pretty Little Liars finally revealed the identity of A last night and it was certainly a shocker.

Cece Drake aka Charlotte DiLaurentis aka Charles DiLaurentis has been behind the liars torture since she stole the game from Mona. Last night, whether fans liked it or not, they were given the answers to the questions that were plaguing the show for seasons. We also go a glimpse of the liars as adults and (surprise) they’re just as fashionable as their younger selves, only with a twist of maturity.

Let’s take a look at some of the cute pieces the girls wore in last night’s episode.

I always thought Spencer looks most adorable when she’s dressed down, and her choice of white overall shorts during the girls’ goodbye scene last night proved that theory.Short overalls cast in a white wash deliver quintessential summer style with a bib-and-brace front and tacked cuffs.

Spencer’s Moto Dungaree Short Overalls by Topshop are currently on sale at Nordstrom for $34.99.

Emily looked cute and comfy as she said goodbye to the gals. We thought her daybreak surf print tank gave her a very relaxed feel…something she hasn’t felt in years. 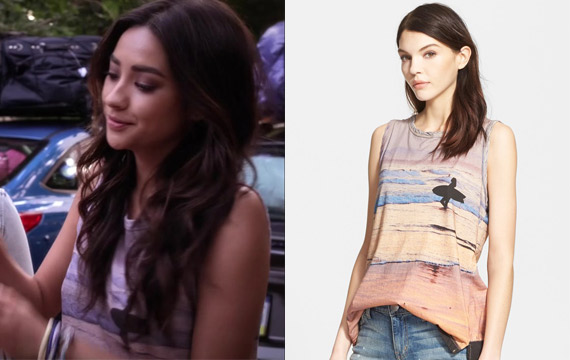 Emily’s Current/Elliott ‘The Muscle Tee’ Surf Print Tank is on sale here for $82.80.

For the majority of the episode the girls were still in their prom garb and, although we broke down those looks last week, we had to circle back around and include Hanna’s gorgeous, dainty necklace. The Victorian-inspired disc is engraved with the words “a token sent with true intent”, making for one beautiful token of love. 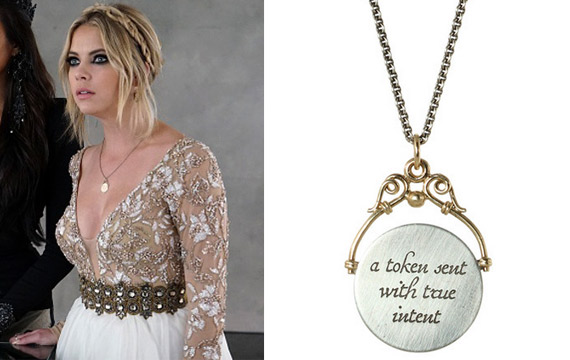 Hanna’s beautiful Corinna Necklace by Workhorse is available here for $216.

During the time-jump, Hanna looked sleek and sophisticated in her high-low top.

Hanna’s Ariana High-Low Sleeveless Top by BCBGMaxAzria top was available here for $178 but is currently sold out.

Aria’s hair color may have changed in the time-jump, but her style certainly didn’t! This great dress is filled with Aria style staples: crazy print, cute cut and unexpected details. 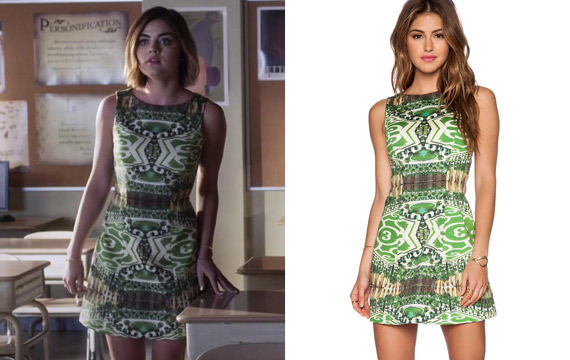 Aria’s Carrie Structured Dress by Alice + Olivia was available for $396, but is currently sold out. We did find one dress currently up for auction on eBay, so check it out and see if it’s in your size!

Take our PLL poll and let us know what you thought of last night’s episode!

We’ll be back with more Pretty Little Liars fashion when the show returns in 2016.