Our long-time readers may recall that we had the opportunity to sit down and have a one-on-one chat with the CEO of Espionage Cosmetics just as they were launching what was to be an extremely successful second Kickstarter campaign. One year later, Jaimie Cordero is not only adding product lines (and devotees!) to her geek makeup empire, but she’s on the verge of showcasing it all in The Geek Boutique, Espionage’s first brick-and-mortar boutique. With all this going on, we were thrilled steal a few minutes to catch up and see what’s coming up next for one of our favorite nerd companies.

You guys have really taken off in the last couple of years, what’s that like?

It’s gratifying and it’s terrifying all at the same time, because when you start something in your house that’s so teensy, it’s just you in your office crying by yourself because it’s just so scary. Then it becomes a different kind of scary, because you now have people that are relying on you to make the decisions so it CAN get bigger, so that it can grow, so that you can keep doing things like this. So it’s really, really fun and really, really scary all at the same time, kind of like a roller coaster. It’s just been awesome to see the baby grow up. I have a lot of pride about what goes on at Espionage. We’ve worked really, really hard on it.

Has the success changed the way you handle things behind the scenes?

It does in the way that I’m a boss. I started it out on favors and friends and then I had to actually grow into being able to direct people and not just work off of what was good for them. It’s now what’s good for the company, what is going to help us become a better company so that we can get to the level of a Her Universe, where they support a little nerd industry of their own. We want to do the same thing, but that take a lot of time and a lot of wise decisions. So that’s what has been different. It is no less fun than it was, though. In fact, it becomes more fun because we know that every time we make a step in the right direction, all of those long hours, they’re actually working. So it’s not as scary as it was in the beginning because we’re like “I don’t know if this is even going to happen or if anyone’s going to get it,” and now we know that they do.

Speaking of expanding, you’re getting into a brick and mortar store in August. Tell me about that.

The subscription boxes that we launched with the Kickstarter, we didn’t expect the level of craziness that happened with that – how excited people were, and there are a few things that happened with that subscription box that allows us to introduce new product into the market every month, and without going into some kind of debt for it, so it’s essentially capital that comes from that and then allows us to keep staying fresh, and people really want to be in on that, and us nerds, we really like exclusive firsts. We like having access to stuff before everyone else does, and that’s what that subscription box is and I think I saw it at the time but didn’t see how big it was going to be, and it made us have to expand. We needed to expand almost immediately after that. So the brick and mortar store is half production for the subscription boxes and the other portion is what everyone has been begging us to do, which is “where can I come and pick up the stuff in person? Where can your artists show me how to use these colors if I can’t make it to a convention, if I can’t get tickets, if I don’t have time? Where can I do that?” That’s what we’re starting here. We’re referring to it as “a really well-curated Artists’ Alley” because it’s not just our products. It’s products from other really geeky companies like Throwboy and Geeky Hostess and Pixelosis and companies like that that have a really solid product, but just like us have to get it in people’s faces. 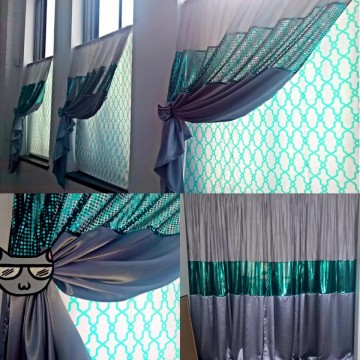 Is this the first step to opening more boutiques?

Hopefully. I want to never say never, but I want to see how this goes. I want to see what we can make more awesome, what kind of experiences we can create for people that aren’t just shopping. Brick and mortar stores on a retail front are not a super great idea, so we have to build other things into it, which is why it’s partially subscription box production, as well. We’re also going to be hosting cosplay workshops, so we’re going to have some of the bigger cosplayers who are really good at crafting come in. People will be able to come into our store for the day and learn how to work with Worbla or the crafting foams that they use, or our makeup artists will teach them how to work with 3rd Degree or silicon bases, stuff like that. So they get a little more hands-on into the nerd world that happens at conventions that a lot of people won’t ever get to experience. We kind of want to bring that to them in the store and teach them how to bring their fandom out in a creative way, in a fun way, and kind of create a little bit of community. Because that’s what Espionage is about – a little bit of a community with the arts and the fun of being a nerd.

Are you taking a step towards doing a full face? Espionage has all sorts of pigments now. Are you going into foundation and everything as well?

Yes, we are. Right now we’re in R&D for five other cosmetic products. And I’m really really picky about them, because I want them to be to the level of our eyeshadows and our nail wraps, and our nail wraps are so good. I hate to be ‘braggy mom’ about it, but they’re really good and I’m proud of them, so I want everything else to be on that same spectrum of awesomeness. So we’re waiting on R&D on that, and then right now we just got our trade dress paperwork for another project that we’re going to introduce into the market – something that does not currently exist, so that’s going to be very exciting. That’s going to take me about another 18 months. Because there is so much love behind what we do, we literally never stop thinking about another cool thing to attach to the company. Everybody is in on it all the time. We actually have a board in our office where people can just put up what things they think we need to be doing, whether that’s how we package the orders that go out, what new products, or licenses they want us to go after. We always always are striving towards something new and better, because they boys have so much. They have so many awesome things because people have been thinking about it longer, so we’ve got some things to catch up on.

Obviously everyone’s been awesome, but has there been a partnership that’s really stood out to you, that you were really excited to work with?

Gearbox has been magical because I know that they don’t necessarily get what we do, but they’re so progressive about everything. Even in their games, they have quests about “fake geek guys.” They really get it, so they’re like “maybe nail wraps aren’t our jam, but we’ll totally support you in this.” They’ve been so amazing to just let us play with that [intellectual property], because we love it so much, and create things for girls like us. They’re essentially like “do YOU guys like it? Would you buy it?” and then it’s cleared, and that’s not always how it goes.

Then for non-licensing stuff, Her Universe has been incredible. Ashley [Eckstein] has been, she’s an inspiration to all of us who are trying to build a company in a place where there was a market, not that wasn’t there, but that people were blatantly ignoring. She has kind of created that market for us and made it a viable option.

If you’re in the Tacoma area (or willing to make the pilgrimage), make sure to drop in to The Geek Boutique on Sunday, August 16th for their Grand Opening and Nerd Block Party. All of the details are up on their Facebook page, so check it out!