Andrew Lees and Joseph Morgan are squaring off in a new look at the upcoming season of The Originals.

In the photo, released by Entertainment Weekly, Klaus and his sired progeny Lucien are sharing an intense moment that hopefully won’t end in violence.

Andrew Lees joins the cast in the upcoming season as Lucien, who had previously been described as “a member of Klaus’ sire line who comes to New Orleans with a secret agenda involving Klaus. He’s described as intelligent, charming, wildly successful and at ease with princes and paupers alike. He prides himself on being two steps ahead of everyone else,” 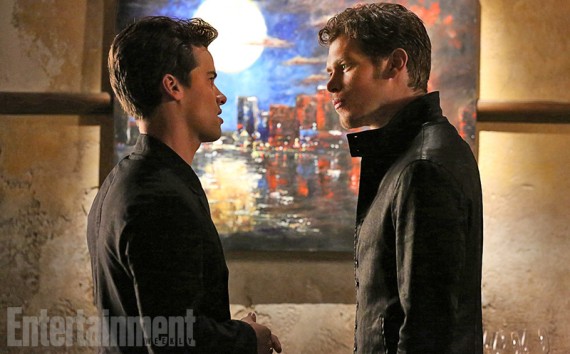 We do know that Claire Holt will be returning as Rebekah because her sired vamp, Aurora, is in town causing some trouble. “Aurora is part of Rebekah’s sire line,” The Originals EP Michael Narducci told E! News. “So we’ll get to see some flashbacks between Rebekah and Aurora, and we’ll also get to see Aurora come to our present day New Orleans and wreak some fun havoc. Absolutely, that means that Claire is returning. In flashbacks, it would have to be Claire.”