The film, based on the novel written by Beatrice Colin and Sara Pinto, is set to premiere on Oct. 9th and Blanchard stars as Cleo, the young girl who accidentally turns her sister (you guessed it) invisible. The film marks Rowan’s first lead role in a Disney Channel Original Movie.

The official poster for the movie, as well as a description thanks to Disney, are below: 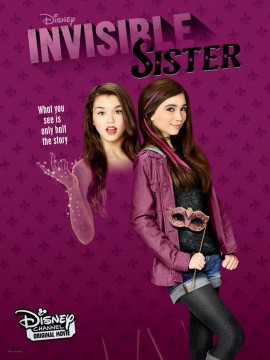 Set in New Orleans during Halloween, “Invisible Sister” follows Cleo (Blanchard), an introverted young science prodigy whose class project accidentally turns her popular older sister and the school’s star lacrosse player, Molly (Berelc), invisible. Cleo, who has become accustomed to living in Molly’s shadow, is forced to step outside her comfort zone and into the shoes of her older sister to take her place on the day of an important game. As the sisters try to convince their friends, teachers and Molly’s lacrosse team that nothing is wrong, they must rely on each other like never before, and in doing so, they gain a better understanding of one another and themselves. Meanwhile, they are up against the clock to find an antidote to reverse the effects of Cleo’s experiment before Molly’s invisibility becomes permanent.

If you haven’t seen the first teaser for the movie, head on over here and watch it now!

Keep an eye out for Invisible Sister, heading to Disney Channel on October 9th and feel free to share your thoughts on the movie with us in the comments below!