Photos of The Muppets star Kermit The Frog with his new girlfriend Denise were released today and fans are not here for the Miss Piggy’s replacement.

News of Kermit and Miss Piggy’s split was announced weeks ago, but it appears Kermit has decided to forgo being upset about the end of the relationship and head straight into rebound territory. The frog’s new girlfriend, Denise, is reportedly a head of marketing at ABC. 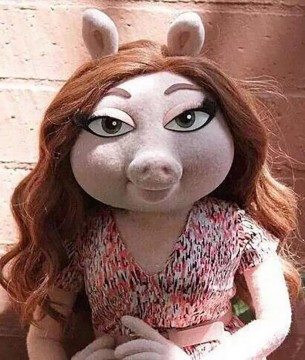 “She’s always stopping by the set of Up Late,” a source told People about Denise.

The source also told the site,”He calls her his girlfriend.” Uh-oh!

The word has spread throughout The Muppet fandom and so far they’ve have had no problems letting their feelings toward Denise be known (Hint: they aren’t here for it):

So many questions with this #Kermit and #Denise…Was Kermit creeping? Did Ms. Piggy know? Was she violent with Kermit cause she knew?!

I am not cool with #denise. dude Kermit you gotta give your self a while to recover before you move along.

Wait. Kermit already moved on from Miss Piggy??? DID HE AND NEYO GO CLUBBING TOGETHER?!? Whappened???

I'd expect others to be on that yo-yo tip. Not Kermit. I didn't think his bounce back would be so quick. These frogs ain't loyal.

v cool to see The Muppets is now targeting the "men going through their mid-life crisis" demographic. #KermitTheFrog pic.twitter.com/vQ7PC8LKIa

#KermitTheFrog has a new girlfriend?!?! My childhood is having a nervous breakdown right now. https://t.co/P40LMG6IVy

I'm sorry. Did #KermitTheFrog really just start dating a younger, thinner pig? I can't with this.