Sam, Dean and Castiel are up against their darkest foe yet when Supernatural returns.

Fans of the series know that the defeating The Darkness is our heroes’ main concern and in the new trailer, we finally get a look at exactly what The Darkness can do to people…and it ain’t pretty.

Jensen Ackles, who plays Dean Winchester in the series, feels that The Darkness presents a unique, even positive, opportunity for the brothers. “What I’m really looking forward to is the fact that it’s a common target that the boys can kind of unite on, and get some more allies to fight a big bad,” said Ackles of the Darkness. “Usually it is one of the brothers is afflicted with something bad, whether it’s demon blood or the Mark of Cain, something to that effect of we’re fighting to save each other. This is now we’re fighting to save humanity and I think that’s something that I can certainly get onboard with.”

When you watch the promo, you’ll see that Castiel (Misha Collins) isn’t going to be of much help either. “He’s still struggling with the effects of that attack dog spell from Rowena, so we’re really picking up the pieces right where we left off in the beginning of season 11,” stated Collins of Cas’ fate when the show returns.

We seriously hope everyone makes it through this one alive, because right now, it ain’t looking so hot.

Brace yourselves and take a look at the intense (and bloody) trailer below: 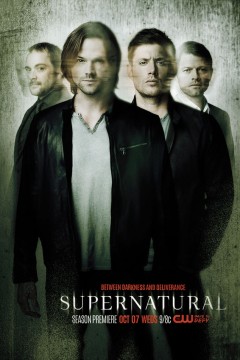 Although The Darkness has no shape or form in the promo, Supernatural EP Andrew Dabb let it slip during Comic Con that the new, ancient big bad could be a female. “I would describe it as also the Big Bad,” stated Dabb. “I mean I would say The Darkness is… a different point of view that we’ve seen from our bad guys in a long time. I would say that also the character’s origins and connections to our main characters are something that, you know, her power and her– or IT’S- power kind of overwhelms in such a way that it can touch all different aspects of our show, from angels to demons to monsters, witches and everything else. So it allows this character to intersect with all of our different characters in very cool ways.”

Everything Is Wrong in New 'Supernatural' Trailer