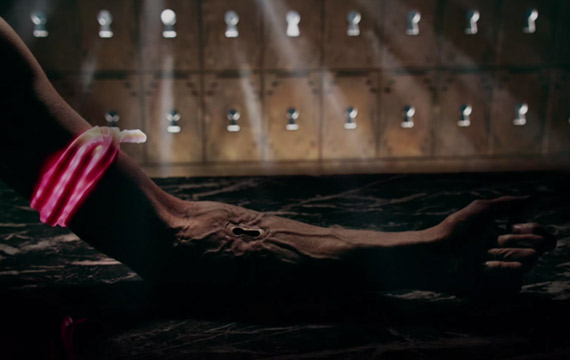 The latest teaser for American Horror Story: Hotel may be hard for some of you to stomach, but teases an important theme of the upcoming season.

In the latest video, we see a forearm that lowers to reveal some prominent veins along with a key shaped hole. More than one of our characters will be dealing with their respective addictions this year and you can bet drug addiction is ALLLL in the mix.

Sarah Paulson’s character, Hypodermic Sally, is a big time junkie.  “My character this year is quite dark. I think she’s sexy,”said Paulson previously. ” She’s a drug addict, and not that drug addicts are sexy, but this girl happens to be quite sexy. She’s got a thing. I don’t think it’s like anything I’ve done on this show … I play Sally, I live at the hotel. I hate Iris in a rather ancient way for reasons that are revealed quickly. I have kind of budding something with Wes’s character. It’s sort of dark and, sorry, you don’t know this yet.”

You can read more about this season’s characters here and here.