Doctor Who star and long-running companion Jenna Coleman is reportedly preparing hang up her TARDIS traveling license and bid the Doctor farewell.

The actress, who has played companion Clara Oswald since season 7 of the series, will allegedly not be returning to the series after its ninth season, premiering this weekend. According to the Mirror, Coleman decided not to return after landing a role as Queen Victoria in a high-budget ITV drama.

A source told the site that “Jenna clinched the role of Victoria a while ago but it’s been a very closely guarded secret.” However, ITV is remaining mum on casting news and neither Coleman nor BBC have confirmed her departure.

The rumor of Coleman’s leaving has also been fueled by this post: 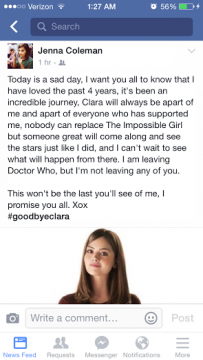 The new information, coupled with the (now-deleted) post may look convincing together, especially since Coleman was poised to leave the show at the close of last season, but fans should still hold out for an official word from ITV, BBC or Coleman, seeing as how the Mirror is a known gossip site and the Facebook page that posted the above message isn’t verified as Coleman’s official page.

Doctor Who returns with a two-parter, “The Magician’s Apprentice” and “The Witch’s Familiar”, September 19th, 2015 at 9/8c on BBC America.

So what say you Whovians? Is it time to say goodbye to the Impossible Girl?