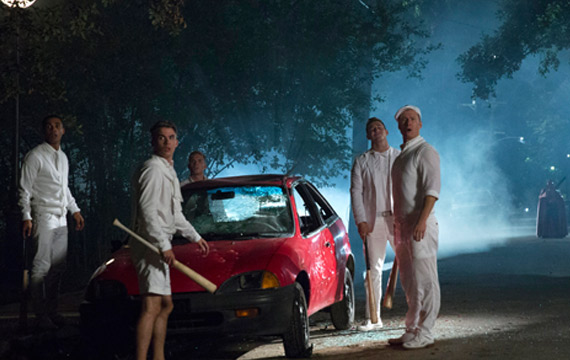 Scream Queens delivered another hour of bloody fun last night, as more bodies piled up around Wallace University at the hands of the Red Devil…or Devils.

This week the university’s new mascot, Coney the soft serve ice-cream cone, bit the big one, while Caufield, one of the Dickie Dollar Scholars, will now have to figure out how to perfect that golf swing with no arms. By the episode’s end, viewers found out that Dean Munsch (Jamie Lee Curtis) l

The actor behind the double-amputee, Evan Paley, took some time to talk to The Hollywood Reporter about what it was like filming the hilarious boy band-inspired scene, who he thinks is behind the Red Devil mask(s) and more.

On the Dickie Dollar Scholars

“They’re typical frat boys. They’re all about having a good time, not really caring about anyone else other than themselves. They’re very macho but deep down inside know that there are a lot of sexuality issues in their frat. And they’re also just really embellished versions of frat stars. They’re all very college-y, very bro. They’re all minions to Chad. We all go with his ideas; we all follow him; we’re all just machines in his world. I love the fact that they made it a golf frat. The way we dress is absolutely ridiculous. Our style is so insanely out of this world, and everyone has their own unique style in the frat. We’re just a stylish group of douchebags basically.”

On finding out about his character’s fate

“I had no idea about anything with my character. Ryan called and said, “So, you want the good news or the bad news? The good news is, you don’t die right away. The bad news is I’m chainsawing your arms off.” I thought it was hilarious. I joked around and said, “Good! I’ll be like the modern-day Chubbs!” The process of making all of the prosthetics took about eight hours.”

On who he thinks that killer is

“Here’s my theory: I think that the Red Devil is Oliver Hudson [Wes, Grace’s father]. I think Grace was lied to as a young child and told that her mother died when she was 2, but that her mom is actually the one who died in the bathtub. I think she’s the baby and Wes’ crush was the one that had the baby and he was obligated to take care of the baby. And because the girls let her die, he basically comes back to exact revenge on all the Kappas and everyone who gets in the way. I don’t think that the Dickies are really targeted. I think whoever the baby is is involved in some way with the killer, whether it is the killer or is involved with the killer, but this episode really throws everyone, because in our scene, there are two Red Devils.”

Leave your killer theories in the comments below and catch a new episode of Scream Queens next Tuesday at 9pm on FOX.

'The X-Files' Official Trailer Is Here!

Lady Gaga Is Billboard's 2015 Woman of the Year

New 'AHS:Hotel' Sneak Peek Demonstrates Why You Should Always Check Under You Bed