Jane Austen’s beloved literary figures are kicking zombie butt in the first trailer for Pride and Prejudice and Zombies.

The film is based on a parody book and mash-up of the same name that combines the classic Jane Austen novel with modern day zombie fiction. The movie will stick close to the book and follow Liz Bennett (Lily James) as she’s pressured to marry by her family, when she’d rather help defend their home against the zombie outbreak.

“To succeed in polite society, a young woman must be many things,” Bennett says in the trailer, “Kind, well-read, and accomplished. But to survive in the world as we know it, she’ll need…other…qualities.” Then the ladies proceed to show us exactly what those qualities consist of (hint: kicking zombie ass).

Take a look at the new trailer for the film below:

Lionsgate also released the first poster from the film: 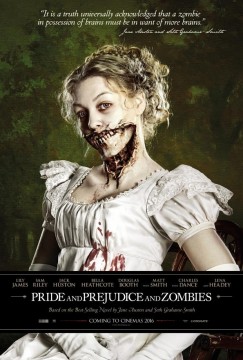 Pride and Prejudice and Zombies heads to theaters Feb. 5.

Let us know what you think of the trailer, and whether or not you plan on checking this film out, in the comments below!