Last weekend, I joined millions of other players in the Star Wars Battlefront open beta. DICE opened up their auspicious and ambitious (say that five times fast) new shooter for gamers around the world and gathered their copious feedback. I was able to sit down with some of my cohosts from my other job at Kennesaw State OWL Radio and take a good look at the PS4 version of the beta Sunday night.

Here are my thoughts:

Battlefront plays absolutely beautifully. Its moving and shooting mechanics are extremely fluid (especially when you have the jumppack to soar around the battlefield with). Taking on targets both at range and up close offers just enough challenge to be enjoyable and satisfying.

Each player can bring three “cards” or abilities with them into battle. You unlock these abilities by earning points in the game to spend outside of the action. They can be anything from different guns and grenades to jumpacks and shields. Your gun, grenade, and jumpack cards have cool-downs, while more powerful perks, like your shield, consume charges that you must find on the battlefield. The abilities bind to L1 and R1, and Triangle on the PS4, and to your bumpers and Y for Xbox One. You never know quite what your enemy’s toting, and it keeps you on your toes.

You can also find equipment in the field. These come in several flavors, from deployable bubble shields to explosives. It’ll be interesting to see what’s all included in the full-fledged game. Equipment binds to L1 and R1 together or to both bumpers together.

On top of that, the game’s visuals are stunning and intricately detailed. Walking in the snow and sand leaves little dustings of footprints; the explosions are terrifying and awe-inspiring (and pretty), and the lasers arcing across the screen actually make you want to keep your head down. It feels and sounds just like a battle in a Star Wars movie, with all the chaos of a real fight and all the glitz of a space opera. 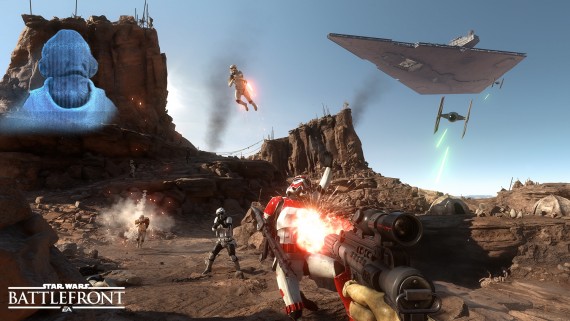 Several other reviewers have noted that it’s incredibly easy to die in the game. They cited it as a bad thing, but I disagree. Unlike Halo or a hundred other shooters, you’re not a supersoldier with shields and body armor in Battlefront. You’re just a soldier, a red-shirt. Granted, stormtroopers wear armor, but they’re still just guys (and/or clones. Besides, that armor never helped them out much in the movies, as Battlefront II pointed out). A real soldier can’t soak up damage like a Spartan. One or two good shots, and he’s down. I hope DICE doesn’t increase your damage resistance too much in the wake of the beta’s reviews. Being easily killed forces you to keep your head down and play smart. You can’t go wading out into the fray with a gravity hammer in Battlefront, and that keeps things interesting.

Survival is Battlefront’s version of Halo’s firefight. You must stand, either alone or with a friend, against increasingly difficult waves of stormtroopers as General Akbar tries to pull you out (at least in the beta’s available mission). The game centers around claiming pods with ammo and ability charges and holding off troopers. I’ll tell you, nothing quite compares to standing with your friend when an AT-ST comes clomping around a rock formation to bear down on you.

Drop Zone involves two teams of eight fighting for control of pods similar to those in Survival. It’s a king of the hill-type game. From what I saw, the action got frantic, frequently coming down to concentrated assaults down narrow corridors of rock. I can see it becoming a popular gametype for competitive, tactical players.

Walker Assault (on Hoth, you can imagine) pits the rebels against the steady onslaught of two AT-ATs trudging through the snow and ice to destroy them. The Rebel objective is to hold “uplink nodes” on Hoth’s surface, allowing communication to get up to the Y-Wing bombers (Snowspeeders can also cable the walker’s legs, of course, though I didn’t see anyone pull it off while I was playing). The bombers hit the walkers and take out their shields, and then the Rebels concentrate their fire on the walker. As an Imperial, your only goal it to break through Rebel lines, take the uplink points for yourself, and let the walkers take out the base. The game ends when either both walkers go down, or the Rebel base gets exploded.

Many, many reviewers took issue with Walker Assault, claiming that it was unbalanced, and that it was much harder for the Rebels to win than it was for the Imperials. Again, I disagree.

I think people are two quick to jump down game developers’ throats about balance. Think about it: for one thing the Rebels lost the battle on Hoth. Now, we can’t just take that for granted in a multiplayer game. Both teams should have a chance to win. I don’t think, though, that Walker Assault prevented that. I don’t mean to brag by saying this, only to state a fact: I won my very first game of Walker Assault with the Rebels on Sunday. A concentrated, coordinated group of Rebels can win. It takes teamwork and skill, but you can pull it off. I think that’s awesome. What’s more satisfying, to win a tough fight with teamwork, or to win an equal fight alone?

According to GameSpot, DICE and EA have come forward, promising to update the gametype. I hope that they don’t change it too much. Perhaps they could add more Rebel players, or more equipment drops for them if they must make it “balanced”. We shall find out together, though.

All in all, I was incredibly impressed with Star Wars Battlefront, and have high hopes for November’s release.

Battlefront will be available on November 17, 2015. Stay tuned!