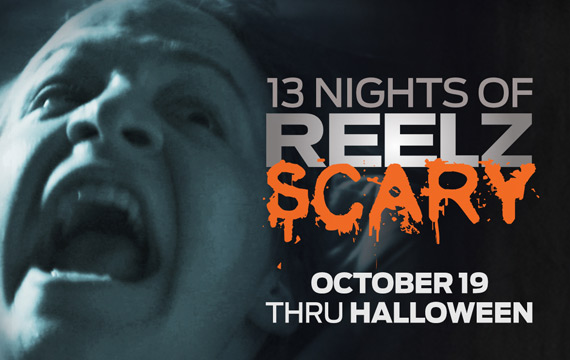 This post is sponsored by REELZ; however all thoughts and opinions expressed are my own.

REELZ Channel is well into their 13 Nights of REELZ Scary Programming which started on October 20th and wraps up this Saturday (which of course is Halloween). Each night the network has aired fan-favorite horror films along with behind-the-scenes documentaries. They’ve also highlighted their original shows including Fame Kills and Murder Made Me Famous.

Do you remember the first time you ever watched a horror film? How old were you? Chances are you were younger than you should have been and were not allowed to watch whatever film you were watching. Chances also are it’s still probably your favorite horror film.

For me personally, it was Poltergeist that traumatized me. I was seven, and my parents had no idea that I was watching it. Ever since that day, I still can’t stare at fuzz on the TV. Now that I’m considerably older and horror is one of my favorite genres, I still find the older films far scarier than anything that has recently came out in theaters. Films like Silence of the Lambs and Psycho possess a timeless and utterly creepy vibe to them that modern day cinema has yet to mimimic.

Do you prefer the classic horror films too? What is your favorite horror film to watch at Halloween? Let us know in the comment section below! And be sure to indulge in REELZ Channel’s scary movie marathon and check out Silence of the Lambs, The Amityville Horror Murders, Psycho, Behind the Screams: Alien Invasion, and so many more!

13 Nights of REELZ Scary Programming every night through Halloween at 9pmEST/6pmPST on only the REELZ Channel!

This post is sponsored by REELZ; however all thoughts and opinions expressed are my own.

'Indiana Jones' Producer Says Recasting Indy Not in the Plans