by rennlark
in Featured, TV Reviews 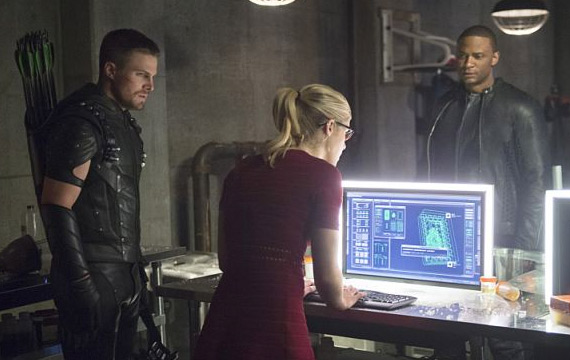 With Laurel and Thea out of town, Original Team Arrow is still trying to get a bead on the ‘ghosts’ haunting Star City. They manage to trap one minion and extract his cyanide before he offs himself, but he tazes Digg and still gets away. Curses!

Digg comes home to find his door ajar (never a good thing in Star City, or any prime time television show). There’s an ARGUS agent inside with information that had been requested by Lyla months ago. Mina Fayad is the one who hired Deadshot to kill Andy Diggle, and because TV, she’s just been pinged as coming through the Star City airport this afternoon.

Back in the lair, Felicity gets a ping about a bank robbery underway. Oliver calls Digg for backup, but he’s busy tracking Fayad and ignores the call. Oliver goes anyway, but discovers that the robbery was Double Down’s way of luring him into a trap. They fight, and Oliver just barely manages to escape after taking a playing card to the arm. Digg doesn’t fare much better. He gets spotted by Fayad’s guards and gets into a shootout, only just getting away himself.

At this point, Felicity is 100% DONE. She uses her Loud Voice and puts the two in timeout while she takes the playing card to be analyzed by Curtis (who now appears to be the new Season 1 Felicity). They boys talk it out and Digg finally comes clean about his hunt for Andy’s killer. They pool their intel and figure out that Double Down, Fayad, and Dahrk are all connected.

Felicity is able to track Fayad’s phone to yet another abandoned warehouse/factory/industrial building, where Oliver and Digg find Fayad’s body. Evidently, Darhk wasn’t too keen on her shootout with Digg and the attention it drew, so he had Double Down kill her, as well.

Felicity and Curtis figure out that the card contains magnetite, a substance used both in tattoos and by birds as part of their biological navigation system. Hey, know what that means? It means that Double Down can find that card again, which he instantly does, busting into Palmer Tech to try and murderize our favorite Star City geek squad. Felicity ends up taking Curtis down to the secret lair and putting a bullet into Double Down’s shoulder. He promptly hops in a car and starts heading back to Central City, where the metahumans all still live.

After checking in with the lair, Oliver and Digg stop Double Down’s car and take down the metahuman, but not before Oliver launches himself in front of a deadly playing card meant for Diggle. Fortunately, the Kevlar holds and their bromance is restored.

With DoubleDown heading for the metahuman wing of Iron Heights (because Arkham has taught us that it’s a really, really good idea to keep all the really powerful villains in the same place), Original Team Arrow goes for drinks! Oliver reveals that he’s working on a surprise for the team: a new lair!

Felicity checks back in on Curtis. Not only is he okay, but he’s Cisco levels of stoked to learn that his boss is working with the Green Arrow. Felicity’s phone, which has been weirdly glitchy all episode, starts spelling out her name in Matrix font.

While all this is going down in Star City, Thea and Laurel have taken Sarah to Nanda Parbat. Merlyn refuses to use the Lazarus Pit for Sarah, because it only barely worked on Thea and she was only mostly dead. There’s no telling if it would work or what it would do to someone who’s been dead for a season and a hiatus! Nyssa agrees with Malcolm (believe it or not), saying that Laurel wants to bring her back for her own sake, not Sarah’s.

Merlyn also isn’t much help with Thea’s issues. He says that the rage in her will grow until sated by the blood of the one who hurt her, but since that was the old Ra’s, she’s SOL and has to keep killing to quiet her demons. Thanks, Dad. Thea’s rage convinces him to at least try to sate her guilt by using the Pit to bring Sarah back.

Sarah goes into the Lazarus Pit and comes out animalistic and utterly incoherent. Nyssa blames Laurel for whatever happens to Sarah next and destroys the Lazarus Pit to keep Merlyn from ever using it again. He is not amused. (Guess Barrowman only gets to be immortal in ONE franchise!)

Sarah’s back!! She’s bat-guano-crazy, but she’s back!! We know from numerous Legends of Tomorrow trailers that she’s going to be all sanity-having again. What I want to know is how she’s going to end up somehow unable to stay in Star City. I’m putting money on it being because of Laurel, but that may just be because Laurel still has yet to become a character who doesn’t irritate the bejeezus out of me every other episode. I’m sure she’ll get there someday (I hope).

You may have noticed that I haven’t been posting what’s going on in the flashbacks so far this season. Honestly, they’ve been playing that plotline so close to the vest thus far that it feels like there’s almost nothing to write up. For your edification, though, a brief recap of the last three episodes’ worth of flashbacks – Ollie sucks at being a vigilante in Coast City, so Waller kidnaps him and drops him back on Lian Yu to infiltrate drug farmers using slave labor to grow their product. On the plus side, ding dong the wig is dead. Et Fin.

Here’s hoping for a peek at Oliver’s new surprise lair next episode!

Curtis: “Since when are you a badass?”