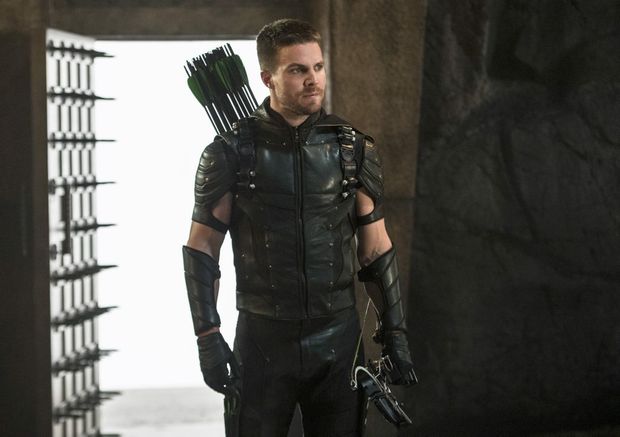 Something (else) is rotten in the state of Star City. Heavily armed cops make a big drug bust, but shoot a couple of detectives in the process and then abscond with the contraband. The not-evil half of the SCPD finds a SIM card on the scene, but doesn’t have the manpower to process it quickly. Quentin, therefore, does what any self-respecting cop on a superhero show would do, and hands it over to Team Arrow for answers.

The SIM card is from a GPS-enabled walkie-talkie and leads Team Arrow to an abandoned warehouse (which has long since been the Arrow version of Doctor Who’s Welsh quarry. Seriously, even the basement in Laurel’s posh apartment building looks like an abandoned warehouse). It’s empty but for one pad-locked door, behind which is a metric ton of police-issue armor and weaponry.

Oliver tells Quentin what they’ve found while the rest of the team sets up a fake drug bust to catch the bad cops. Quentin insists on being there, and frankly, the whole thing goes south pretty quickly. At least the busted bust affords Captain Lance the opportunity to identify the group of bad cops: all of the tech they were using was created specifically for the Anti-vigilante Task Force.

While all of this was being set up, Laurel decided that now is the time to tell Quentin about Sara’s semi-miraculous return from the dead. She has Sara chained to a pillar in her basement and keeps insisting that the barely-verbal ex-assassin “just needs more time.” Quentin is understandably horrified. It’s all very Monkey’s Paw, really. Knowing that Damien Darhk used to be with the League of Assassins, Quentin goes to our resident Big Bad for advice. Dahrk tells him, “father to father,” that the creature in the basement isn’t Sara anymore, and that she would be better off still dead.

Obviously, this isn’t what Papa Lance was hoping to hear, but that’s not the only reason that this meeting went poorly. In her search for the bad cops, Felicity accessed the dash cams in all of the police vehicles in Star City, including Quentin’s. She and Oliver see Quentin having a friendly pow-wow with the biggest bad we’ve known yet, and Oliver is Not Amused.

Oliver goes to see Quentin, and man, is there some chewed scenery left in his wake. Oliver has been looking to Quentin as almost a father figure, calling him one of the major factors in his decision to run for mayor, and now he has been seriously let down. With Quentin falling so far from grace, Oliver tells Thea that maybe Star City is beyond saving and that he doesn’t want to run for mayor anymore.

Fresh from that confrontation, Quentin decides to do what he has to do and goes down to Laurel’s basement with the intention of putting Sara back in the ground. Laurel finds him before he can pull the trigger and talks him down, leading to a total meltdown. The two are coming out of the basement when they’re attacked by the bad cop taskforce. Laurel is knocked out and Quentin kidnapped for nefarious purposes.

Liza Warner, the head of the team, takes Quentin to the SCPD Contraband Disposal Facility, where the city keeps all its recovered drugs (because this is a brilliant idea). They’ve decided to steal the drugs and blow this popsicle stand. Team Arrow swings in, as per usual, and manages to not lose spectacularly this time. Liza does manage to get the drop on Oliver, but Quentin delivers a brilliant “we have to save the city by saving ourselves” speech and Liza lets herself be arrested.

Once she’s in custody, Quentin comes home to find Oliver waiting for him once more. He convinces Papa Lance to be their inside man on Damien Darhk’s League of Extraordinary Evilness. Yay for a slightly less morally-ambiguous Quentin Lance!

Oliver goes back to his campaign headquarters (which, btw, is the cover for the massive, tricked-out secret lair below) and finds it cleaned up and filled with interns. Thea did some recruiting and has taken on the job of Oliver’s campaign manager. Shortly thereafter, Oliver formally announces his candidacy for mayor of Star City.

Over on the briefly referenced side plot, Felicity’s phone is still acting up. She assumes it to be a prank by Curtis, but he denies involvement. What he HAS done is found a black box of sorts that has recorded Ray’s last moments. It’s password-protected, though, and Felicity isn’t eager to access the files. Curtis talks her into it, and she finally listens to the message. We don’t yet know what it contained, but I can only assume it’s going to lead to Ray being un-shrunk relatively soon(-ish).

Okay, so I know this wasn’t a filler episode. I know several significant things happened in it, not the least of which was that ridiculously beautiful confrontation scene between Oliver and Quentin. That being said, it certainly felt like we spent a lot of time setting up big things for the next few episodes, rather than letting things happen now. Sara? Still crazy – fixing it next time. SCPD? Still corrupt – let’s work on that. Ray? – Still “dead,” but hey, weird messages from mysterious, Ray-related sources.

Cool things that DID happen this week: the lair reveal – totally awesome, if a little glitchy for plot reasons. Glossed over pretty quickly, though. Oliver formally announcing his mayoral candidacy – well done there, sir, though considerably less eventful than the Danforth announcement a couple of weeks ago. Oliver finding out that Quentin’s been working with Dahrk – y’all, let’s talk about that scene for a hot second.

I have to admit, as much as I adore Arrow, I have always silently tacked “for a CW show” on the end of most of my praise. This episode, though, both Stephen Amell and Paul Blackthorne totally blew that confrontation scene out of the water. It was tight, well-written, and extremely well-acted. Add to that the teary-eyed “I’m sorry, baby”s of Quentin trying to put down Sara, and my respect for the actors in both of those scenes just sky-rocketed. Standing ovation, guys.

Thea: “God, I didn’t even think you could pronounce ‘biometrics.’”