Derek Zoolander (Ben Stiller) and Hansel McDonald (Owen Wilson) may be back, but we can’t say the same for their modeling game in the new trailer for Zoolander 2.

We catch up with the pair years after the peak of their 2001 Zoolander fame to find out that the fashion world has moved on without them. That’s right, Zoolander and Hansel are has-beens…but when the world’s most beautiful people start getting picked off one by one (including Justin Bieber, Usher, Demi Lovato and Miley Cyrus), all ending up with Zoolander’s signature Blue Steel look on their faces, there are only two men that can help take down the perpetrator, one fierce look at a time.

Penelope Cruz appears in the trailer as the beautiful Interpol agent that leads the models on their case, as well as Kristen Wiig who plays the slightly horrifying, expressionless Alexanya Atoz. Will Ferrell also returns as the “bad to the core” Mugatu.

Oh and in case you’ve ever wanted to see Benedict Cumberbatch as an eyebrow-less, gender fluid top model, now is your chance.

Watch the funny new trailer for Zoolander 2 (but don’t laugh…laughing causes wrinkles) below: 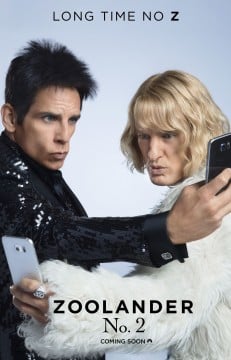