Most shows are wrapping up this week for the holidays, but don’t worry – you won’t have to wait too long before you’re reunited with your favorite characters. CW has announced the winter premiere dates for their series, and we have all of them for you below! 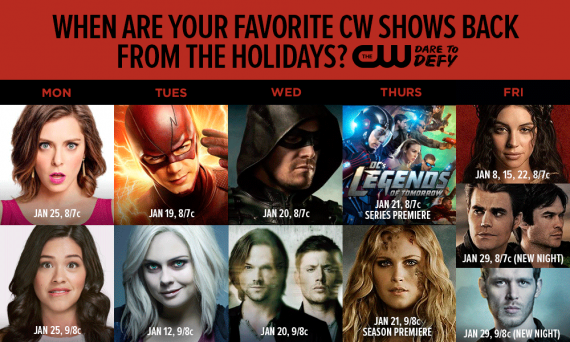 We do want to note that Reign is going a hiatus after its three-episode run in January (The 8, 15, and 22). CW has not yet announced when the series return after that break.

During Reign‘s Friday night absence, The Vampire Diaries and The Originals make their move to their new timeslot in order to make space for DC’s Legends of Tomorrow and The 100.

While a number of networks are taking pretty long winter breaks, CW’s series are returning pretty quickly – which means that most of these series will be breaking again during March/April. We’ll keep you posted on those dates as we hear them!

Are you excited for your favorite CW series to return? Let us know in our comment section below!