Daddy’s Home will immediately appeal to fans of The Other Guys, the last film which starred are two leading men from this film, Will Ferrell and Mark Wahlberg, and if you were a fan of that movie, chances are you’ll enjoy this film as well. While it’s cliché and over-the-top in many scenes, it still manages to make you smile.

Will Ferrell plays the boring, safe, infertile Brad who is stepdad to his wife Sara’s (Linda Cardellini) two kids. He finally has the family he has always craved, but his domestic bliss is shattered when Sara’s ex-husband Dusty (Mark Wahlberg) re-enters their life.

The macho and wild Dusty suddenly wants Sara back and to become a fully involved father, so Brad needs to defend his home, his manliness and prove he is the most worthy of the dad title. However, Dusty will not be easily defeated and constantly throws tests at Brad to break his nice guy exterior, with the homely Brad retaliating to prove he is dependable and more capable at daddy duty.

The film is essentially comprised of a series of scenarios of the two men trying to outdo each other, with most of these being ruined by the trailer.

A lot of emphasis has been put on sequences where Brad attempts to ride a motorbike and tries to jump onto a skateboarding half pipe from a roof with disastrous consequences. The punch line of both of these scenes was given away in the trailer, which is strange as they’re not even the movie’s best bits; the special effects were shoddy and distracting and the whole set up is simply unfunny. 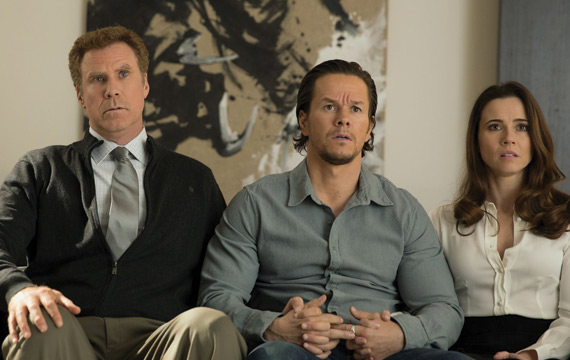 The true comedy is in the rapid-fire exchanges between the duo, who have completely different personalities, body types and approaches to parenting. Ferrell and Wahlberg have great chemistry and it felt like they improvised a lot. Watching Sara caught in the middle is a delight, and Brad’s boss, played by Thomas Haden Church, is also awkwardly hilarious.

Stand out moments include a drunken Brad at a basketball game, Dusty busting a move at a school dance and Brad’s session in a fertility clinic, featuring a scene-stealing turn from Bobby Cannavale as an overzealous doctor.

Daddy’s Home is cheesy, the script is riddled with clichés, some scenes feel desperate and the end can be seen miles off. This may be unoriginal material, with a lot of jokes failing to land, but in spite all these issues it produces more laughs than expected. It’s still entertaining and leaves you with a smile on your face. A pleasant, easygoing movie, albeit with mistakes.