This morning a new The Walking Dead mid-season trailer was released by AMC! While the series still doesn’t return until February, fans now have something to hold them over for the next few weeks!

When we last left our walker-fighting crew, Rick (Andrew Lincoln) and the rest of the gang covered themselves in guts and gore to be able to get past the hoards of walkers. This seemed to be going pretty well until Jessie’s son decided to put everyone’s life at stake by saying, “Mom,” repeatedly.

Meanwhile, we last left Daryl (Norman Reedus), Sasha (Sonequa Martin-Green) and Abraham (Michael Cudlitz) meeting a motorcycle gang that was our first tease of Negan’s introduction (who will be played by Jeffrey Dean Morgan). 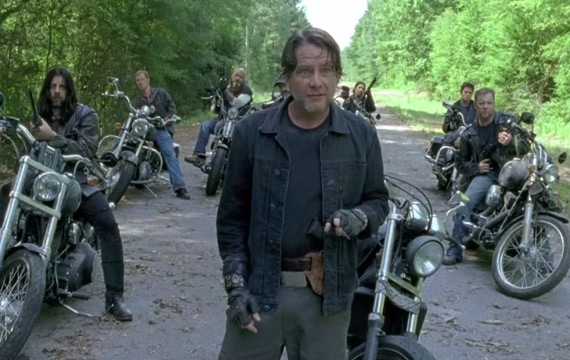 In the new trailer, we see some of our core cast appearing to be watching something horrific. Fans of the comic probably have a few good guesses at what is going on, but we don’t know for sure that the episode will follow the comics.

Take a look at the new Walking Dead mid-season trailer below!

Showrunner Scott Gimple has commented in previous interviews that when the series returns, a lot of people will die. Andrew Lincoln has also commented on this saying, “If you thought [the midseason finale] was intense… episode 9 — and I’ve been saying it since we shot it — episode 9 is… well, if you thought that was intense, just wait. I think it’s on par with any of those, and it may be the most ambitious, and the most epic and just insane, emotional, action-overload we’ve ever attempted. When we shot it, it was pretty much all night shoots, and everybody went mad in that episode, and I can’t wait to see the results, because it was bananas. We were all covered in blood and screaming, and it was like nothing I’d ever witnessed before. So you thought 8 was intense? Wait for 9.”

The Walking Dead returns on February 14, 2016! Can you think of a better way to celebrate Valentine’s Day than with our favorite crew and some zombies? We can’t either! Share your thoughts with us below on who you think will make it out of the current situation in Alexandria!