It’s a new year, which means it’s time to get back to the keyboard and quietly gloat over my Christmas goodies. One of my favorite packages to arrive in the holiday mail this year was my very first edition of the Boom!Box from Espionage Cosmetics. Espionage has previously offered a beta version of their subscription service to Kickstarter sponsors, but this is the first box to be available to the general public.

Here’s a rundown of the treasure chest I opened this time around:

Black Phoenix Alchemy Lab – I’ll admit, one of my favorite products in the box came from outside the Espionage line. In fairness, I’ve been a fan of Black Phoenix Alchemy Lab for quite some time. BPAL sells hand-blended, sustainably-sourced perfume oils inspired by anything from mythology to Fraggle Rock. My Boom!Box included an “imp” (BPAL terminology for a 1/32oz sample vial) from their Crimson Peak line of products. Delicious!

Sam Skyler – Also in the box was a limited edition print from artist Sam Skyler. The original piece was created with sharpie and Espionage “everything shadows,” and it’s absolutely lovely. And for those who have boarded the “coloring as meditation” bandwagon (guilty!), Sam has included a rather fantastic coloring page for your own entertainment.

E.L.F.S. – Espionage’s cosmetic grade glitter in limited edition holiday colors (red, green, and gold, in this case)! Yes, I wore the bejeezus out of this to a Christmas party. Yes, I will wear it again (and again). No, I have no regrets. 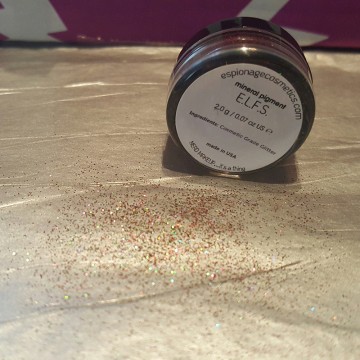 Kiru Button – Attached to the wyvern scale-patterned headband (see “The Snazzy” below) was a button with a holographic background proclaiming me a “Self-rescuing Princess.” Damn skippy, Kiru. It makes a great accessory to the headband, but I’ve already popped it off to adorn my button-bedazzled laptop bag, because it’s pretty and that’s how I do.

Wyvern-themed Accoutrements – Each bimonthly Boom!Box has a theme, and this month’s was a collaboration with Bombsheller leggings. To that end, Espionage included the aforementioned snazzy green headband from Bombsheller themselves, along with matching nail wraps from the Espionage line and a charming limited run pendant from Optimystical Studios. Granted, the headband will likely become a gift for someone who does not have my weirdly-shaped head, but I’ll longingly admire it from afar (or figure out a different way to wear it. Pinterest, here I come!)

…and the Maybe Next Time

Peppermint Forest NPC bath bomb – So if you’ve bought in to any other subscription services (Birchbox, ipsy, Loot Crate, etc.), you know that it’s really rare for everything in the box to be a home run. I confess to being kind of underwhelmed by the bath bomb. It smelled lovely, but was small-ish and didn’t really seem to add much to the bathing experience. I’ve adored everything else that Espionage has paraded before my wondering eyes, but I think I’ll have to skip reordering this product. 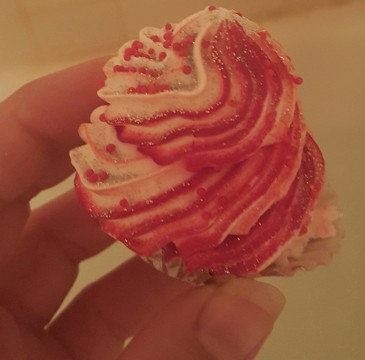 All in all, the Boom!Box was pretty darn fantastic. And in case you’re still on the fence about joining the next cycle, Espionage just sent word of February’s theme. Looks like I’ll be checking out Pride and Prejudice and Zombies decked out in some super sweet Jane Austen-themed merch! Can’t wait!

Obligatory disclaimer: Espionage Cosmetics sent me a Boom!Box for review, but my opinions are my own.