Everywhere you look, there are exclusive photos! Netflix has released exclusive photos today for the highly anticipated Fuller House which is making us emotional, happy, teary. So much nostalgia! This seems that it’s for the premiere episode as all the original cast members except Mary-Kate and Ashley Olsen (Michelle) (According to John Stamos’s statement to PEOPLE.com, they are very afraid of acting again as they haven’t been acting in a while)  reprised their roles in that episode (Candace Cameron Bue, Jodie Sweetin, Andrea Barber, Bob Saget, John Stamos, Lori Loughlin, Dave Courlier, and Blake and Dylan Tuomy-Wilhoit (Nicky and Alex)). What we also know so far is that Bob, John, Dave, Lori are guest-starring throughout the 13 episodes.

In addition to the photos released by Netflix, People Magazine also released an exclusive photoshoot of the cast which is out on on newsstands, Friday. Included in the feature is an interview with series creator Jeff Franklin and cast members John Stamos and Dave Coulier. 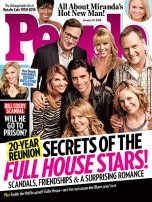 I’ve never seen a cast bond like this,” Jeff Franklin stated. “It feels like a real family.”

“We never stopped loving each other,” John Stamos added. “That magic you saw? It’s still there because it never stopped from the day that we ended the show.”

“It’s surreal being back” Dave Coulier also added. “It’s like moving out of your house when you’re a kid and then you move back in. It shouldn’t be this much fun.”

Fuller House premieres on Friday, February 26th on Netflix! Comment below and let us know how excited you are and if you’ll be binge-watching all 13 episodes!