The first thing that grabs your attention about The Forest is that it’s a horror film coming out in January. These facts alone will likely set your expectations. While I can’t say that those expectations will be far from inaccurate (because they won’t be), I can say that the basis of the plot is actually pretty cool.

The Forest is a supernatural thriller set against the Aokigahara Forest (a real forest in Japan). A young American woman, Sara Price (played by Natalie Dormer), goes in search of her lost twin, Jess (also played by Dormer). Jess has mysteriously disappeared into this forest where people regularly go to kill themselves, and Sara knows that her sister is still alive despite the fact she’s been missing for days. Desperate to find her sister, Sara enters the forest with the help of a tour guide and a new friend, Aiden (played by Taylor Kinney), in hopes of finding Jess. From there, the horror part of the film sets in.

I had no problem with Natalie Dormer or Taylor Kinney’s performances, they did the best the could with a script that seemed to be getting as lost in itself as the characters were in the forest. The concept actually interested me, which is rare for a horror film, but the script just didn’t hold up. All of the necessary parts are there for a psychologically thrilling, supernatural drama, the film just doesn’t deliver them. What it does deliver is a lot of dead bodies lurking in the trees and ghostly, creepy faces popping out at the camera to make you jump.

We’re told that the forest feeds on your inner demons, and uses them to slowly destroy you if you had sadness in your heart. Everyone keeps repeatedly telling Sara that she has sadness inside her. However, we never really learn why that is. We only learn why her sister Jess has this sadness. I think had the script delved deeper here, the overall film would have been much stronger.

Overall, this movie is on par for January horror films. Nothing truly sets it apart, but it’s also not disappointing either. I found myself far more intrigued about the actual forest that the film was based on, the Aokigahara forest. I was unaware of this “suicide forest” before this film, however a lot of elements that the film presents is actually pretty accurate. The iron in the mountain actually does mess with compasses and cell signal, so it would be pretty easy to get lost in such a large and dense forest. People do also go to this forest to commit suicide, so I think it’s pretty safe to say if there’s a list of haunted forests in the world, this one is probably pretty close to the top.

If you’re looking for some jumps and squeals – this weekend (accompanied by the desire to yell no at the screen repeatedly as Sara Price makes bad decisions), then this film isn’t a bad choice, but overall it felt mediocre. I didn’t love it, but I also didn’t hate it. However, now I really do want to watch a documentary on the Aokigahara Forest.

As a fun side note, I also received a little promotional goodie from the film this week in promotion of today’s release. A little viewfinder toy that was actually personalized to your’s truly. Pretty creepy right? I loved it! 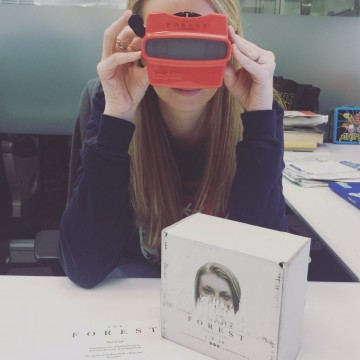 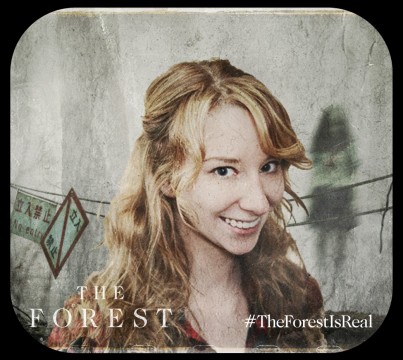