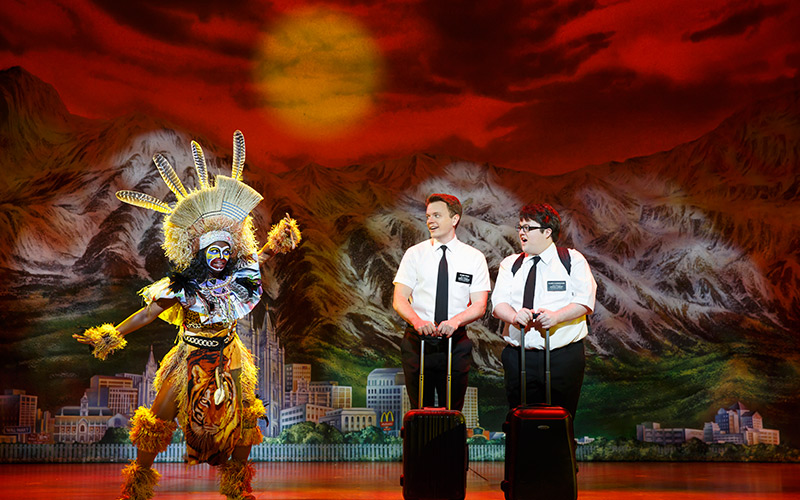 South Park creators Trey Parker and Matt Stone joined forces with Avenue Q‘s Robert Lopez for one of the best musicals of the 21st century, Book of Mormon. In 2011, it won 10 Tony awards, including Best Musical, and finally in 2016, I finally saw it. The wait was too long, and had I known just how much I would adore this musical, I would have found a way to see it sooner.

The politically incorrect musical blends together the feel of South Park and Avenue Q with that of the Mormonism. It’s a story of two mismatched elders, Elder Price and Elder Cunningham, who get sent to Uganda (instead of the greatest place on earth according to Elder Price, Orlando). Africa is a bit a of a culture shock to these two to say the least, but they’re prepared to spend the next two years of their lives doing missionary work and hopefully bringing more people into the Church of Christ of Latter-day Saints. Needless to say, a few things go wrong, and Elder Cunningham finds himself “altering the story” of Joseph Smith and the creation of the Mormonism to fit the tribulations of the natives in the village where they’re staying (Oh, and there’s also plenty of call-outs to Star Wars, Lord of the Rings, and The Lion King (Yes, I geeked out).

Book of Mormon is offensive, but it’s equally as offensive to everyone despite your race, gender, or sexual preference. It’s not remotely appropriate for kids, and most older audiences will likely not be fans either. However, if you’re in the demographic that loves South Park (or really any of Comedy Central’s programming), you’ll likely love Book of Mormon. While I love my epic, classic musicals (Les Miserables will always be #1 for me), Book of Mormon was a breath of fresh air that kept a smile on my face throughout the entire play. It was one of those evenings where my face actually hurt from smiling so much.

Cody Jamison Strand is what truly makes this production. His comedic timing and overall nerdy-yet-endearing personality creates a perfect Elder Cunningham. His mannerisms reminded me so much of Josh Gad, I couldn’t quite get over it. Take a look at the photo above, they even look like they could be brothers.

Ryan Bondy also delivered a strong performance as Elder Price, as did Candace Quarrels as Nabulungi (who gave me chills during several of her songs). And while the performers deserve praise for delivering their roles with such heart, the actual script (and lyrics) is where the true genius lies. I feel like Parker, Stone, and Lopez should probably take some time off to write another musical, because Broadway needs more plays like this one.

You can pick up tickets for an Atlanta show from now through January 24! They can be purchased through the FOX Theatre Box Office or online at www.ticketmaster.com!