A bit of background, first, in case you’re confused. Square Enix and A-1 Pictures (of Sword Art Online fame), a subsidiary of Aniplex, have banded together to create a prequel anime series called Brotherhood: Final Fantasy XV. The show and game’s plot are set in Eos, a solid land mass surrounded by ocean and divided into several countries, including Lucis and Niflheim. Noctis, the protagonist of the series and the game, and his friends, Ignis, Gladiolus, and Prompto, are on the run after the emperor of Niflheim and his Chancellor launch a surprise attack on Noctis’ homeland, Lucis. The attack is in violation of a recent truce signed by the two nations. 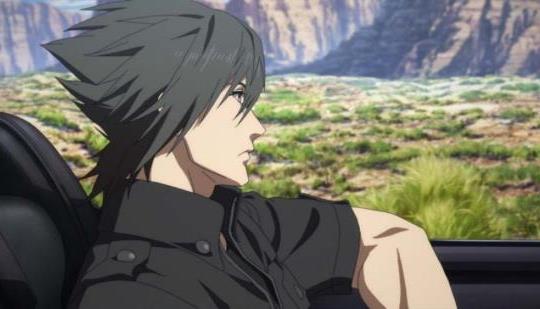 The first and primary thing I noticed about Brotherhood’s first episode, “Before the Storm”, is the atmosphere. As we know from the game news, Final Fantasy XV is set in a time period very similar to our own, except for the fact that they have magic and we still don’t, sadly. There’s a distinct and intriguing juxtaposition between fantasy and realism that permeates everything in the show, a theme that reportedly will continue in Final Fantasy XV (The game’s tagline is, “This is a fantasy based on reality”.) The car, Regalia, doesn’t look much different from our vehicles, and one scene features the bros eating hamburgers in a diner looks like it could come straight out of an episode of Supernatural. We see scrubgrass and billowing sand on all sides. This picture of desert beauty is quickly marred, though, by the arrival of the harsh contours of the mechanized army of Niflheim.

Our posse’s narrow escape takes us to a rural camping scene, and then to a glittering view of the ocean, before thrusting us back into battle. The action scene is the most Final Fantasy part of the episode. Our heroes summon magic swords, knives, pikes, and the like (and, in one case, a super-cool revolver), to take the fight to the axe-wielding, robotic forces of Niflheim. The choreography is appropriately epic and sparkling (if Final Fantasy was an adjective, that’s what it would mean), and looks quite a bit like the combat we’ve seen featured in the gameplay. 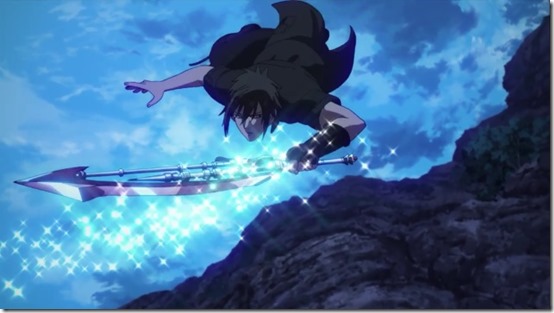 You probably get it; the episode is pretty. Aside from that, we get a good snapshot of the personalities of each character and their relationships with each other. The interactions between our four guys are believable, and at times, quite funny. It’s obvious that they care about each other under their masculine bravado. Beneath it, there’s full dose of backstory to get you acquainted with the game’s plot. My only quibble is as a writer; there are a few times where the exposition itself is a little too blatant for my taste, but given the short amount of time the scriptwriters had, it’s not too bad, and it sets us up well for the rest of the series and the game.

The soundtrack sticks to its sweeping Final Fantasy (see; I’m telling you. ADJECTIVE!) routes, with a few unique touches, particularly in the scene mentioned above. In the diner, the orchestra narrows down to a plucking guitar riff that reminds me of Funimation’s adaptation of Black Cat from a few years ago. Once we get to the combat, it kicks back into high gear, with a bit of Celtic flute rising above it all, unless mine ears deceive me.

All in all, I’m excited for the rest of the series, and even more so for the game (which was the intention of the show anyway, right?). Brotherhood looks, sounds, and feels like Final Fantasy, and I felt a big grin stretching across my face from start to finish

You can check out the episode below.

And don’t forget about the CG movie, Kingsglaive, set for later this year!