Getting excited for this Friday’s premiere of Stranger Things on Netflix? We promise it won’t disappoint you! In fact, we’re calling it our favorite show of 2016!

Set in Hawkins Indiana in the 1980’s, Stranger Things chronicles the search for a young boy who vanishes into thin air under highly suspicious circumstances. His mother (Winona Ryder) opens an investigation into the boy’s disappearance with local authorities that unravels a series of mysteries involving top-secret government experiments, terrifying supernatural forces and one very strange little girl. A love letter to the ubiquitous cult classics of the 80’s, Stranger Things is a coming of age story for three boys that draws this quaint community into a world where mysteries lurk beneath the surface.

We had the opportunity to chat with Millie Bobby Brown, who plays Eleven on the series, when we visited the set in February in Atlanta. Take a look at our interview with her below!

Can you tell me a little bit about your character?

Millie Bobby Brown: My character is a 12-year-old orphan with telekinesis. She encounters these 3 boys, and she forms a really good relationship with this one boy, Mike, but throughout the series, there are still some flashbacks of her when she was a child, when she was in this laboratory. She’s a very troubled character. She doesn’t really know what to do, what life is really. She doesn’t know what a real child’s life is. That’s all I can really say about her.

Did they recommend that you watch any certain movies as preparation for the tone of this series?

Millie Bobby Brown: They told me to watch Poltergeist, Stand By Me, and The Goonies. When I watched them, and now I’ve watched this, I’m like, “You just put those in a blender and you have Stranger Things,” but it’s got such an amazing storyline and plot. It’s not those movies. You see parts of them. I can see where they got it from, but it’s their own show. It’s very independent.

Since your character is so isolated and doesn’t know what it’s like to be a kid really, how did you prepare for that? Or how did you get into the mindset of, I guess, ignoring everything that you know from your own childhood?

Millie Bobby Brown: It wasn’t difficult for me. I find that Eleven is very troubled, but she’s bland and ordinary, and for me to forget my real childhood, you have to think, I’ve been kept in a facility with Matthew Modine, Papa. He wants me to be capable of my powers, and so for me, I had to get in that mind frame, like, “Oh no, this kid’s been through a lot,” and then come back and come back to reality. Eleven is a complicated character. When you get into that mind frame, it’s easy to come out of it. You know what I mean?

What was your audition process like? How did you go about getting the part?

Millie Bobby Brown: My audition process was… It come out really of the blue, to be honest. I was in England, and I didn’t get a lot of auditions there, because obviously I lived in LA before that. When I came, my first audition was a very emotional audition. They said, “Come back for a call back.” I said, “Okay.”

I did another take, they said, “Do you want to Skype with me?” I Skyped with them, and yeah, they were just like telling me about the character, and asked if I wanted to come to LA. I was like, “Uh … I just got back from LA, but sure.” I went there and I’m standing in the room with them, and Ross Duffer’s just come over to me and just, “Zzzzz” on my head, and I was like, “What’s that mean?” I had full blown hair then. I was like, “What is that?” “Well, you’ve got to shave your head.” I was like, “Oh, okay.” My mum’s reaction was like, “Oh my, nooooo!”

It was an amazing audition process. It went very quickly as I met Gaten Matarazzo and Finn Wolfhard, and they just told me about the storyline, and that Noah Schnapp was going to be in it, which was like, you know, Charlie Brown. I was like, “Oh, I love him.”

When I was working with Finn in the audition, and I knew from then that Finn and I had such an amazing connection and chemistry that we just knew when we were doing it – we felt so strongly about the performance we gave. I texted him a couple months later. “Did you get that audition?” “Yeah, I got it.” “Me too!” Yeah, it was an amazing audition process. 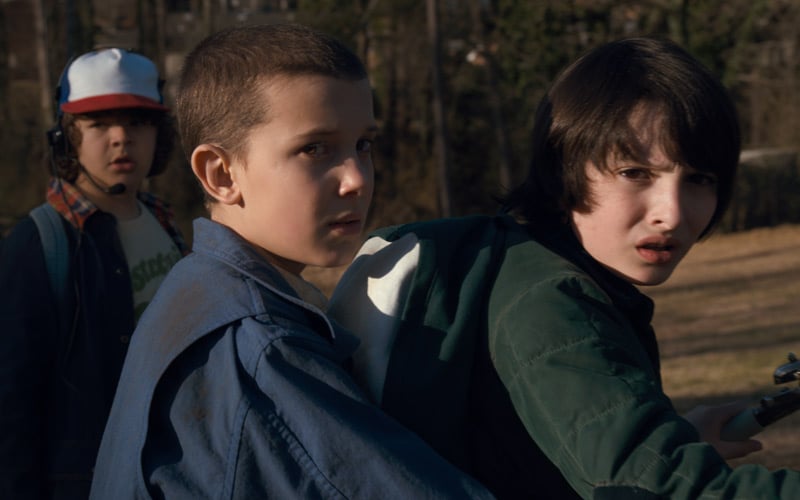 How did you feel about having to shave your head?

Millie Bobby Brown: When they said, “Okay, so you’re going to cut it now.” I was like, “Okay.” Sat in the chair, it was one by one, cutting it off. I was like, “Oh no! What have I done?” It was the best decision I’ve ever, ever made, and they told me, “We want you to have that mindset of Charlize Theron in Mad Max.” We did this sort of split screen with her going like this [makes face], and me going like that, and it was just like the resemblance was amazing. I thought, “Wow, that’s an amazing sort of way to put it.” My mother, she was like, “I don’t want you to do it. No, I don’t want you to do it. Please don’t do it.” It’s like, “Mom, it’s okay.” My dad and I were like, “It’s okay. It’s just my hair.” She’s like, “No, but we’ve grown it for 11 years!” Yeah. When it was gone, it’s so much easier to handle.

That was the day where we had our first read-through, and I first ever met David Harbour, Natalia Dyer, and Charlie Heaton. I’d already met Winona at that point. We met her at the production office, and she came up to me, she’s like, “You know I was told we look exactly alike?” I was like, “Really?” She was like, “Exactly alike. I mean don’t we?”

Is there a certain episode that you’re really excited for people to see in regards to your character?

Can you talk a little bit about your experience filming in Atlanta, and how the city’s been for you?

Millie Bobby Brown: Yeah, it’s been great. I’ve never been here before. This is a great city to be in. It’s very busy. We lived right outside of it, around Fayetteville, and so it’s very quiet, very family-orientated. I have a younger sister, so she likes that sort of environment. When you go into Atlanta … When I have dinner with Winona and Matthew, we were sitting there, and it’s like so many people. Then I go back to Fayetteville, and it’s like very mellow, chilled out, but it’s been great here. We got to do school trips, we got to go the aquarium, and I really want to go to the Civil Rights Museum, Caleb and I really want to go. We’re learning about that in the school, so yeah. We love the city. It’s great.

Stranger Things premieres on Netflix on July 15!This Coverage Is Sponsored By: