Getting excited for this Friday’s premiere of Stranger Things on Netflix? We promise it won’t disappoint you! In fact, we’re calling it our favorite show of 2016!

Set in Hawkins Indiana in the 1980’s, Stranger Things chronicles the search for a young boy who vanishes into thin air under highly suspicious circumstances. His mother (Winona Ryder) opens an investigation into the boy’s disappearance with local authorities that unravels a series of mysteries involving top-secret government experiments, terrifying supernatural forces and one very strange little girl. A love letter to the ubiquitous cult classics of the 80’s, Stranger Things is a coming of age story for three boys that draws this quaint community into a world where mysteries lurk beneath the surface.

We had the opportunity to chat with Finn Wolfhard (Mike) and Gaten Matarazzo (Dustin), when we visited the set in February in Atlanta. Take a look at our interview with them below!

Can you tell us a bit about your characters?

Finn Wolfhard: My character Mike, he’s kind of the leader of the group like Mikey from The Goonies. He can be really precocious at times, really funny, and then really serious, like solemnly serious about finding his best friend, Will. I think that’s why I like him, because he can be so relatable to people who grew up in the eighties, and they’re like, “Hey! I was kind of like that!” Or, “I had a friend like that.” So, yeah.

Gaten Matarazzo: Dustin is a gregarious, foulmouthed twelve-year-old boy. He’s really outgoing. He smart. He’s not really brave. He’s a coward at first, but he really wants to be brave when he needs to go find his friend. Everyone has their own part in the group. Like Mike, he’s the leader. Lucas is kind of like the strong person who’s realistic. Will is kind of like the one we protect. Dustin is kind of the glue that keeps everybody from separating. He keeps everyone together.

Finn Wolfhard: My agent emailed me. He was like, “This part is perfect for you.” Because I’m obsessed with retro eighties movies. Goonies is one of my favorite movies and Sixteen Candles and Raiders of the Lost Ark, all those movies.

Finn Wolfhard: I read the script, and I immediately fell in love with it. I auditioned for it, and they really liked it. They were like, “Hey, do you want to Skype?” So we Skyped, and we talked about movies that we liked. We just talked like we’re best friends. They’re like, “Oh, by the way, do you want to come down to LA to do a screen test?” I did the screen test. They asked me back again. That was it.

Gaten Matarazzo: Mine was a little different. I’m from New Jersey, so I went straight to New York. They had me read for someone. There was a camera in there. I originally auditioned for Mike. They said I didn’t look demanding enough. They said, “Come in for the more quirky, funny,” because he’s the comic relief. They’re like, “Come in for that character.” They had me read Lucas lines. I originally auditioned for Mike. Then I went in for Dustin reading Lucas lines. It’s really complicated. I was like, “Am I auditioning for Lucas or Dustin or Mike? I don’t really know.” That’s when they had me Skype with the Duffer brothers, the directors of the show, Matt and Ross. They told me I would be going in for Dustin. They said, “Why don’t you come down to LA?” Before that they were talking about, “What kind of eighties movies do you like?” I said I like Jaws and Stand By Me and all the classics. Then they told me to go down to LA. I flew there for the final edition with Finn Wolfhard. That’s where I met him. I actually met Millie there, too. Very briefly, I met Millie. I read with Finn Wolfhard. After that, I was the first of the kids to be cast in late June. I didn’t go for the final screen test in July, was it?

Finn Wolfhard: It was July.

Gaten Matarazzo: It was July. I had also known Caleb, who plays Lucas, before the audition started. When I found out he was going to be doing it, I was excited. Yep, that was my audition process.

What’s been your favorite episode to film, so far?

Gaten Matarazzo: Well, it’s really different, because we film two episodes at a time, scattered around, so will be filming a scene from- So it’s six, and will do a scene from five the next day. It’s kind of hard to put them all together, but probably the coolest scenes to film were probably in episode eight, because that’s when all the acting happens.

Finn Wolfhard: Yeah, seven and eight have been fun to film. I really liked shooting one and two.

Gaten Matarazzo: One and two was great.

Gaten Matarazzo: He was great.

Finn Wolfhard: He was amazing. Basically, all of them.

Gaten Matarazzo: It’s one story. It’s hard to choose one episode. It’s kind of like a book series that continues.

Finn Wolfhard: The coolest episodes are probably seven and eight. 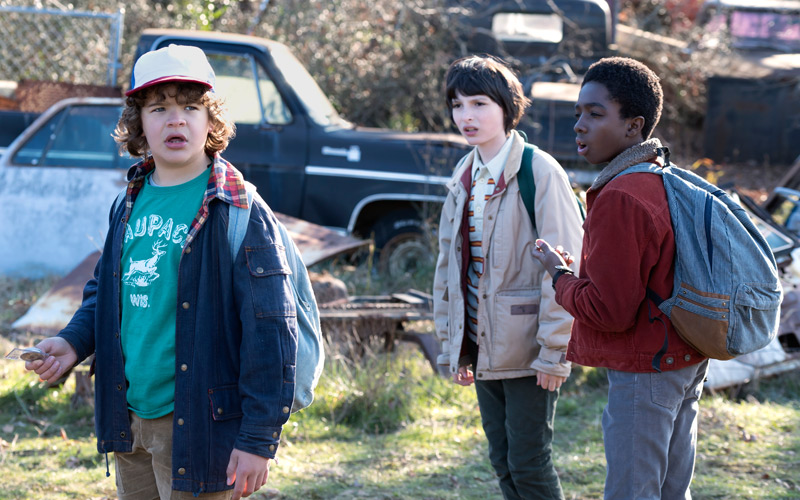 Do you guys feel like working on a Netflix project has been different in terms of the production and the filming in comparison to other things?

Finn Wolfhard: I was kind of the same way. I’ve been in a bunch of indie stuff, because I’m from Vancouver. I did guest roles for the CW for Supernatural and The 100, but that was the real studio stuff I’ve done.

Gaten Matarazzo: You were in The 100?

Gaten Matarazzo: I didn’t know that. See, we learned about each other every day.

Finn Wolfhard: We learn about each other every day! It’s a lot different now, because those were guests are roles. It was like, “Okay, one and done. Thanks for coming.”

Finn Wolfhard: You were on The Blacklist.

Gaten Matarazzo: I was on one episode of The Blacklist. I don’t think it was enough to get the full experience of what it’s really like-

Finn Wolfhard: Exactly. This is been the full experience for a show.

What do you think the main thing is that you are going to take away from this production, in terms of favorite memory?

Finn Wolfhard: Learning things. I learned a new thing every single day about acting, about directing, about producing.

Gaten Matarazzo: Yeah. When I was at home, I’d do little movies, and we wouldn’t know how to change to different shots. We didn’t know the things you do with cameras now. I learned so much. We just did a little movie thing for school, earlier.

Gaten Matarazzo: Now we know what shoulder shots are.

Finn Wolfhard: Three shot, raking shot. I knew stuff from before, because I really want to be a director or a screenwriter when I grow up, and this is a total boost up for my future career for being an actor, director, and screenwriter, because the more I read scripts, the more I learn about scripts, basically. And the more I listen to Matt and Ross, the more I-

Gaten Matarazzo: Yeah, it’s great to have a good relationship with the directors and learn about things you do with cameras and how you direct. I really pick up from Matt and Ross.

Gaten Matarazzo: They’ve really helped us in the past six months.

When you guys are onset, are you asking those questions between scenes?

Finn Wolfhard: We don’t really bring it up. Matt and Ross just start goofing around. Sometimes we all goof around between takes. If it’s a long camera setup, we just goof around and start talking.

Gaten Matarazzo: That just progresses into-

Gaten Matarazzo: You start talking about wanting, and it can be a total different story five minutes later. A lot of times will pick up on things. A lot of times we’re not even talking to them when we pick up on it. We’ll be listening to what’s going on.

Finn Wolfhard: To stuff, yeah. Matt and Ross are the kind of people- Why I love their directing is that they’re straight to the point. Some directors are like, “Ooo, do it like,” like super slow and super philosophized. They’re just like, “That sucked! Do it again!”

Finn Wolfhard: Super upbeat and straightforward. I’m like, Okay, I get it,” right away.

Finn Wolfhard: Oh yeah, yeah, no. They’re totally straight to the point towards- that’s why we progressed so much during the show. That’s why we’ve gotten eight episodes done in five months.

Gaten Matarazzo: They’re incredible people, in general. It’s an honor to work with them.

You guys mentioned a lot of ’80s movies that you guys were pretty big fans of. Is there anything in particular that you drew upon when you were making it, or that they told you to think about, character-wise?

Gaten Matarazzo: ET. Yeah, there’s a lot of movies that really, really with the relationship with children, like The Goonies, there’s Stand By Me, ET. There’s all these movies that relate-

Finn Wolfhard: That all go into this tribute, homage.

Gaten Matarazzo: A lot of this is all about friendship. There’s so many eighties movies that we can watch to pick up on it, and be like, “Okay, so that’s the tone of the movie. That’s what’s going on. That’s how you should act.” It’s like you just pick up from listening and watching things, especially the movies that were made in the eighties.

Finn Wolfhard: And The Thing. There’s a Thing poster back there. 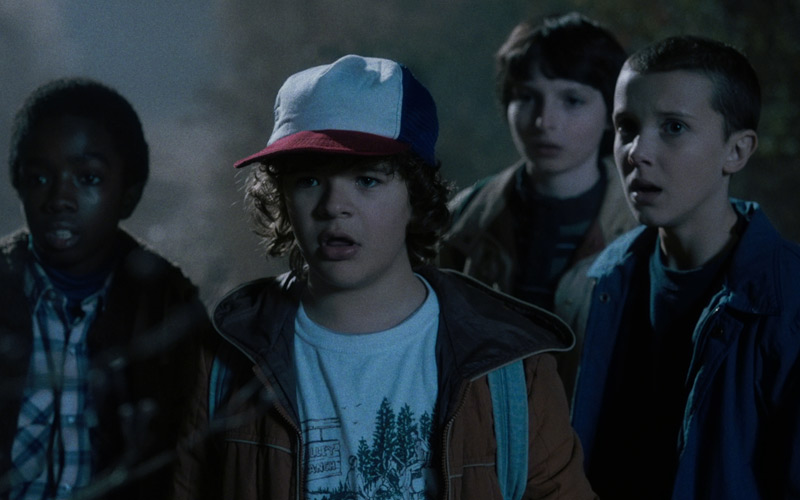 How did you get started on those movies? Was it like your parents just showing you the classics? Was it your own- How’d you seek them out?

Finn Wolfhard: The same kind of- its kind of a dual combination. My dad is a screenwriter, he showed me all these great movies. He showed me ET when I was two years old. I just kind of progressed from there. That’s how I found all these movies. It was also a combination of my brother. We’d also watch movies together. He’d always do voices. He’d always want to do skits. He’d always come up with stuff with me. I don’t think I’d be where I am now if it wasn’t for my dad or my mom or my brother. They all combined my love into filmmaking, because they all encouraged it in this house.

How do you feel the relationships in real life have affected how you, your characters act in the series?

Finn Wolfhard: Yeah, we are like best friends forever now.

Gaten Matarazzo: It’s true. When you work for someone for even two weeks, it’s like you get a special bond with them. Especially kids.