I can only imagine that passers-by in the Decatur area were bewildered to see how many people were crowding the parking lot of the Wesley Chapel Animal Hospital. A line extended through the lot, past a large pile of donations meant for PawsAtlanta, and right up to the door of a bright yellow RV emblazoned with the word GISHWHES. 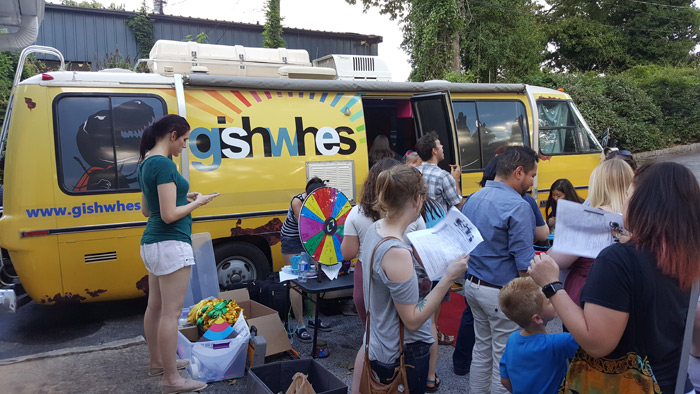 FanBolt had the chance to explore the interior of this creation, known as the GISHbus (“the premiere VIP Executive Mobile Scavenger Hunt Lounge”). We don’t want to spoil too much about what we saw, but we’ve got a few pics below. While sitting on the luxuriously (maxi-)padded seats, we had a chat with the founder of GISHWHES, Supernatural star Misha Collins. 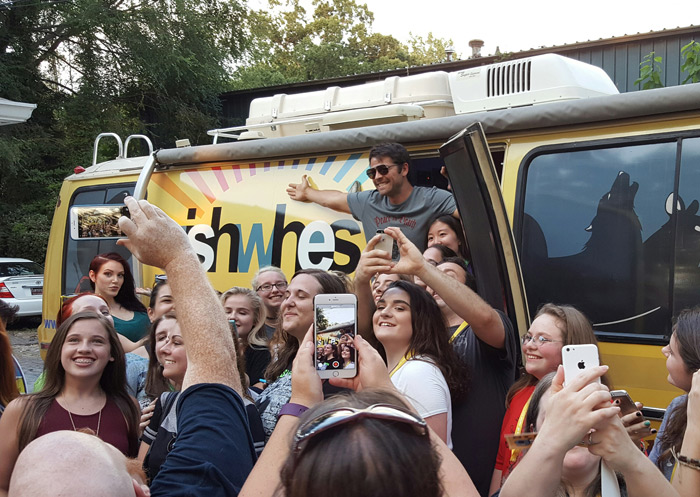 So for someone who’s just coming into GISHWHES [the Greatest International Scavenger Hunt the World Has Ever Seen], how would you describe it?

Misha: GISHWHES is the largest scavenger hunt in the world. People in a hundred different countries are participating in it now. It is something that we have designed to try to make it so that people are pushing their own limits and so that we are collectively pushing global limits. We have broken 7 Guinness records so far. We’ve had tens of thousands, maybe even crossing the hundreds of thousands of people participating so far. And we are trying to do things that are kind of beautiful and awe-inspiring and fun and bizarre and humiliating, all at once. So there’s a real spectrum of different items that we have people try to complete.

What tips can you give us?

Misha: Sleep now, and then sleep after GISHWHES. There are a few items every year that have been staples of the hunt – sculptures made from feminine hygiene products have reared their heads every time. Stormtroopers have been in every hunt to-date. Clothing made of some sort of food product has made its way into every hunt. And we’re doing something with space, i.e. NASA, etc. Other than that, I give you no hints.

Misha: We’ve been giving out what are known as GISHpoints to frequent GISHers – people who participate in our scavenger hunt earn GISHpoints. They’re like frequent flyer points on an airline, and we’ve been giving them out for the last several years, but no one was able to actually redeem them for anything until now. Now they have access to this luxurious, well-appointed, maxi pad-upholstered GISHWHES mobile executive VIP lounge. And so either people can come and hang out in here as it travels the country using their GISHpoints, or they can participate in the little charitable drives that we’re doing as we drive around the country. Or as CJ drives around the country, if we’re being honest.

How are you choosing those charities?

CJ: Some of them, GISHers have contacted us and said “I work for a charity” or “I run a charity.” Sometimes we’ll look for one in the city or see if we know anybody that knows someone. So it’s been sort of a mishmash of that.

Misha: The staff at Random Acts has helped source a couple.

CJ: So we’re using all resources to find good charities throughout the country.

So you guys are going to be at Comic Con in San Diego very soon. Will you be doing something different with the GISHbus there, or is it going to be very similar to what we’re seeing today?

Misha: I think the GISHbus is going to be a combination of mobile and static at San Diego Comic Con. We will have a charitable thing going on there. We might be fleeing the Comic Con authorities, because we don’t really have any of the permits or whatnot that we’re supposed to have there, so that will be exciting. We’re going rogue at Comic Con, basically.

The GISHbus is traveling the country as part of the lead-up to this year’s GISHWHES. If you haven’t registered for GISHWHES yet, I highly recommend doing so at the GISHWHES site. The whole experience is “brilliant and a little terrifying,” and from experience, you are never going to meet a more fantastic community. 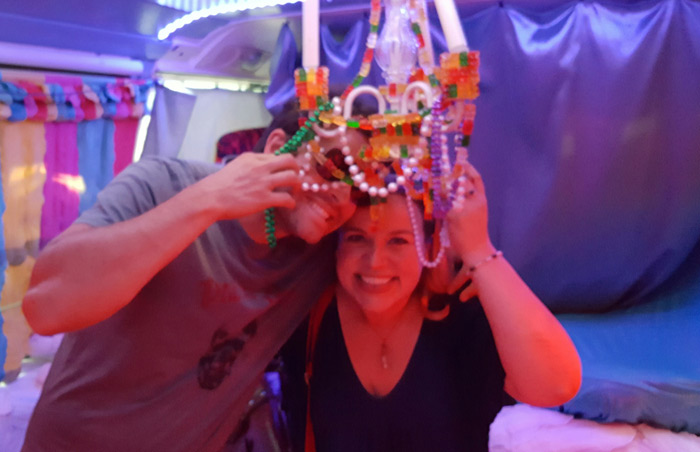