Kingston has done a magnificent job with its line of HyperX Cloud gaming headsets as I’ve been a big fan of them since day one. Now here we are further down the road with another new Hyper X Cloud headset. This time we’re looking at the HyperX Cloud Revolver, a headset that aims to take another leap forward in quality and comfort.

By the way, I always love seeing the message on the inside of all three HyperX Cloud boxes congratulating the player on their purchase of a HyperX headset. It’s a nice personal touch that I appreciate as it welcomes the player to the HyperX family.

The HyperX Cloud Revolver comes at a higher price than the original two Cloud headsets, yet it’s not by a significant amount at all as it’s currently listed at $119.99 on the HyperX website. This puts it at $20 more than the HyperX Cloud II, yet the style and sound of the Revolver makes it feel as if the gap between the two would be wider. 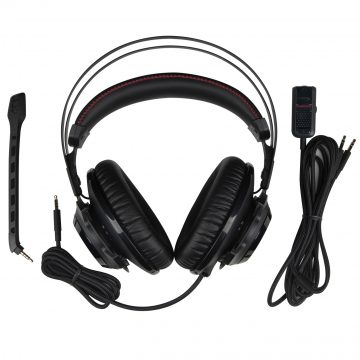 The HyperX Cloud Revolver sounds brilliant. It’s as simple as that. It’s wider audio range really gives the user a sense that more is being heard when listening through this headset. It provides them with a more precise and detailed listening experience. For example, this is great when playing a first-person shooter and attempting to lock-in on a nearby enemy as the more precise sound helps the player do that. This is something most headsets claim to do well, but the HyperX Cloud Revolver captures the battlefield better than most. And no matter what the center stage may be, it’s quality of sound is great for any listening experience, including music.

Owners are able to get a clear sense of sound on all levels of audio which also leads to a well-balanced listening experience. Not one level (Lows, Mids, Highs) is overpowering as all levels come across clearly to the listener. And It’s not just the brilliant sound of the HyperX Cloud Revolver that stands out, but also its superior design.

I’ve never worn a more comfortable pair of headphones in my life. It’s amazing how light these feel while wearing them. They feel as if they are just floating on the listener’s head, yet they still have a solid foundation when being used through the soft pressure on the ears. They don’t slip around one bit even though at times they may be barely noticeable when wearing them.

The best part about the headset’s comfort and usability is how adaptable they are for small adjustments to fit any user’s head. Plus, the user isn’t responsible for adjusting them to fit their head. They just need to put the headset on and it’ll slide into place. This begins with the band that rests on the top of the head as it easily moves up and down for any height and ends with the ear cups having multiple angles of adjustment for covering the ears. 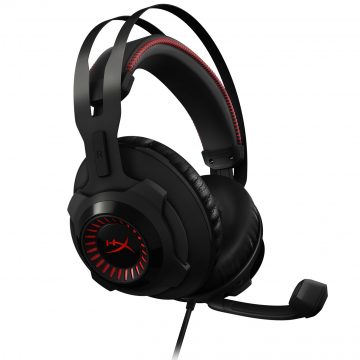 The design of the HyperX Cloud Revolver is fantastic. It’s light, comfortable, and allows gamers to play for hours without having any issues with their ears hurting or being too hot or sweaty. The other brilliant thing about how light the headset is and the maneuverability of the ear cups is that users who have to wear glasses won’t have any issues with the headset putting too much pressure on the location of where their glasses sit on their ears. This is a problem I’ve seen with other headsets when wearing my glasses. Thankfully it’s all comfort here.

The HyperX Cloud Revolver comes with a detachable microphone with a simple rubbery design that allows for minor adjustments. It also comes with a cord extension that PC gamers can use to control the audio level and mute ability. The main cord from the headset is of good length that works ideally when connecting to an Xbox One or PlayStation 4 controller. So the cord doesn’t feel as if it’s getting in the way when playing on consoles.

I will note that while the headset is plenty sturdy I wouldn’t feel comfortable taking them anywhere with me. I wouldn’t just throw them in a backpack like I would with the original Cloud headsets as they really aren’t built for carrying around. These are meant to be kept in one place, with the gamer’s main setup.

Additionally, the HyperX Cloud Revolver is not the best at canceling outside noise. If there is any strong sound in the background the player using the headset will likely hear it during quieter moments of gameplay. However, during the heat of the moment when guns are blazing or music is blasting, the player won’t hear any outside noise.