Hatsune Miku: Project DIVA X is classic, cute, elegant, cool, and quirky, and it even has something extra as well. Ok, so I just named all of the clouds that host the songs players must perform to restore voltage. However, quirky, cute, and sometimes cool does fit well for describing this rhythm-based game.

Hatsune Miku: Project DIVA X brings beat-matching gameplay to the PlayStation 4 and requires players to restore voltage to 5 separate clouds that host different songs. Players must complete individual songs and eventually a main event with multiple songs in order to restore voltage to a cloud before they are able to move on to the next cloud to experience all new songs. During this time the player acts as a manager for the onstage singers, which includes world-famous digital singer, Hatsune Miku.

There are over 30 available tracks to play and multiple ways to experience them on stage. At first players progress through the main event that features the clouds where they can unlock songs. Additional modes such as requested events and free play appear soon after. Players can replay their favorite songs in each of these modes and continue to attempt to gain higher scores while doing so. And to keep the game interesting players can select from a large number of unlockable outfits that each have unique bonuses that add to the ability to score more points. This helps maintain interest in the game as it’s fun to complete songs and earn new outfits that can be used to accomplish a higher score the next time out.

Players will also encounter more challenging ways to play the game too. Instead of just the typical level difficulties like Easy, Normal, and Hard mode, players will encounter situations that make beat matching easier or much more difficult based on play type and not how many beat icons appear on the screen. This includes situations where the beat icon will disappear just before the player hits it to match the beat. There’s also another option that has the icon show up just before it hits the point where players match the beat. Modes like this are always fun for players as it allows them to see just how much of a command they have over a song.

Of course, in rhythm games like this the most important factor is that it has a good variety of music. If there isn’t a wide selection of songs to choose from and multiple songs in a particular genre of music than the player is going to have a problem staying connected with the game. 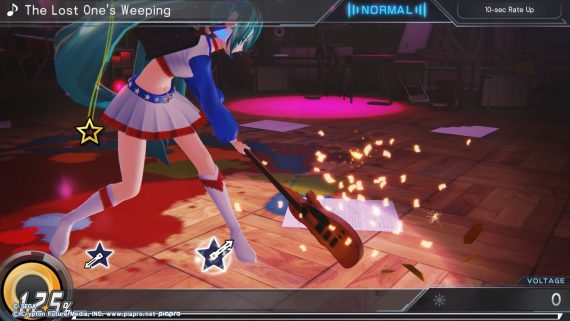 Hatsune Miku: Project DIVA X does cast a good variety of songs, but for me personally I only immediately fell in love with about 3 of them based on the type of music and the rhythm it established for beat-matching. There are other songs I don’t mind playing a few more times, but the issue arises when I could care less about trying to beat them on harder difficulties. It’s the songs the player enjoys most that’s going to drive them to replay it multiple times and attempt the harder difficulties.

Replaying my favorite songs is when I encounter my favorite moments in the game. I love playing the song ‘Satisfaction’ over and over again and getting a higher score each time. This is pretty much the only electronic dance music song available in the game, and it’s the best song in my opinion. I even did a big fist pump when I perfected the song, and that’s what makes beat-matching games like this so satisfying. 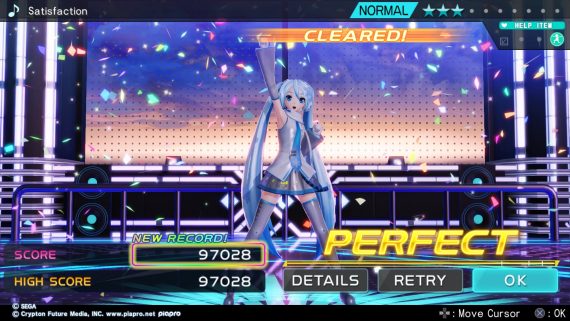 Music in these type of games is very important though. The game is all about beat matching and having entertaining musical segments that allow the player to feel really engaged with the song. I like trance and rock music, and thankfully I have a couple of options that give me those elements in this game. However, I can have fun with any genre of music as long as it has a good beat. That’s where an issue appears with the song selection in this game. It’s not just about my personal preference in genre, it’s more about the song selection itself and how well they interact with the beat matching segments that create the gameplay.

Unfortunately, there are too many songs I don’t care for in this game due to them not having many entertaining beat matching segments. I play and love the DJ Max Portable series, as well as Superbeat: Xonic, and have encountered songs I don’t like much based on genre, yet they still have a groovy enough beat to them that the beat matching segments are entertaining to interact with. That just didn’t happen much for me here.

It’s really too bad as well, because even with it only having a few songs I enjoy I’m still happy with the time I spent with Hatsune Miku: Project DIVA X. I appreciate unlocking different outfits by expertly playing the star zones in each song. It’s a fun challenge for the player to use their beat matching skill to earn these outfits that can then be used to get higher scores based on their ability. I also like the game’s technical zones that give a bonus for completing them. These zones often increase the difficulty for that moment during the song which helps build the excitement. 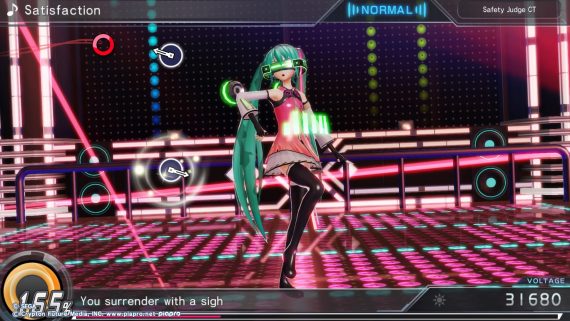 There is a lot of charm with Hatsune Miku: Project DIVA X, including the ability to hand over gifts to each of the performers to make them happy. There are some silly cut-scenes that fans can enjoy that go along with the gift-giving. There’s also a stage editor mode that allows players to create the scene for a performance by adjusting camera angles, special effects, and lighting, and then watch it afterward. Additionally, there’s a photo mode that fans can appreciate as they can use any number of outfits and items, as well as any background image, to create fun photos. There are also many poses the player can set for each character to make photos even more unique.

I really like the format and experience offered in the game from all of the options of customization to the play style and character engagement. If only it featured a few more songs that I liked, because then I would have been absolutely thrilled with this game. But unfortunately my time is cut short due to the lack of songs I enjoy playing in the game. I can only replay my favorite songs so many times before they begin to get old and cause me to lose what magic I have found within the game.

The setting for Hatsune Miku: Project DIVA X is great, but it’s the selection of music, the most important factor, that can make or break this game for any potential player.