It actually took me a day to get used to the sound of the Audio-Technica ATH-ADG1X Open Air High-Fidelity Gaming Headset. After spending time with other quality headsets that focus on heavier lows and louder mids, switching over to these took a minute to unlearn what I’ve grown used to.

The ATH-ADG1X doesn’t overly boom players with heavy low sounds as it keeps a good crisp and clear balance among all levels of audio. I actually did miss some of the deeper expressions of sound at first when trying these, but it’s easy to forget after spending a few days listening to the headset. The reason why it sounds a bit lacking in power is because it’s more of a cleaner sound and doesn’t need to overcompensate on this end to mask any lack of quality sound elsewhere. The bass sounds fine, it just takes a minute to get used to.

Now I also mentioned being used to a louder mid-level sound and vocal sound from other headsets compared to this one. Again, after time, the ear grows familiar to what this headset offers. However, I still feel voices and some of the mids come across as a bit muffled. It’s not very obvious, but something just doesn’t sound perfect there. This is my biggest question mark when it comes to the audio clarity of the ATH-ADG1X, because outside of this everything comes together for a brilliant and well-balanced sound. 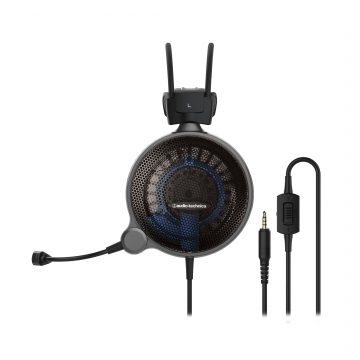 Audio-Technica’s ATH-ADG1X is extremely light and comfortable to wear for long sessions of gaming or listening to music. These are easily the lightest pair of headsets I’ve ever worn. It features a wing support on top that softly grasps at the top of the wearer’s head. The pads on both the wings and ear pieces are very soft as well. The overall design is built for lightweight and comfort. The headset does feel a bit fragile and flimsy though, which is a sacrifice of making it a lightweight headset.

The ATH-ADG1X also remains very cool to wear for long sessions thanks to the lack of pressure that’s placed on the user’s head and around the ears. The light feeling also benefits those who wear glasses as they don’t apply much pressure to the ears.

The microphone on the headset is built on and non-detachable. It’s short and easily adjustable so that it’s not in the way for those moments when it’s not necessary to have. There is a mute button and volume adjustment scroll on the cord not too far down from the ear. This makes it easy to adjust sound levels and mute when needed.

The ATH-ADG1X works great for those who are on PC, PlayStation 4 or Xbox One. It did take me a while to gain appreciation for the headset, but once I did it became very clear just how detailed and precise the sounds flow from the speakers. They do run on the pricey side at $299, but are definitely worth consideration for those looking to obtain a high quality pair of headphones with superior sound qualities.