Are you ready for Gears of War 4? Well, prepare to be blown away (Campaign Review).

A new Gears adventure begins as players are introduced to new hero, JD Fenix, son of Marcus Fenix. As players delve into the story that takes place 25 years after Gears of War 3, they’ll encounter persistent COG bots known as DeeBees, massive environmental Windflares, and the emergence of an eerie new enemy.

In Gears of War 4, players take the role of JD Fenix as he and his two friends, Del and Kait, find themselves at odds with the new COG as they raid one of its facilities in search of much needed equipment for their own village. However, with recent human abductions, tensions between the COG and outside settlements have grown due to the suspicious disappearances. Unfortunately, JD and crew stumble into trouble during their raid which puts them at odds against the persistent COG army. 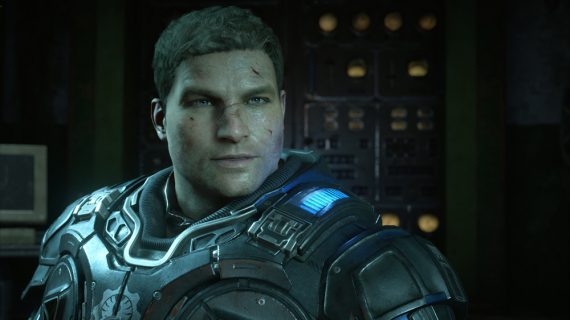 Fighting against the DeeBees is quite a bit of fun as they have unique tendencies that players must be aware of during battle. They also have enemies known as heavies that prove to be an entertaining and difficult challenge as well, especially on Insane difficulty when they launch intense firepower in the player’s direction. It’s not long into the fight against the bot-heads that the new enemy swarm makes its appearance which then leads players down a dark path of discovery. That’s when JD decides that there is only one person they can trust to help them put the pieces together, Marcus Fenix, his dad.

There are a lot of good cut-scenes and excellent moments among the characters in Gears of War 4. The interactions between JD and Marcus are interesting, while the comedic and sarcastic banter between JD and Del provide a lot of entertainment throughout the entire campaign. Kait also plays a big role in the game and becomes very likeable as well. All the characters are great to fight alongside throughout the campaign and the dialog between them definitely adds good value to it. The characters really help drive the game forward, as does uncovering the new mysteries. 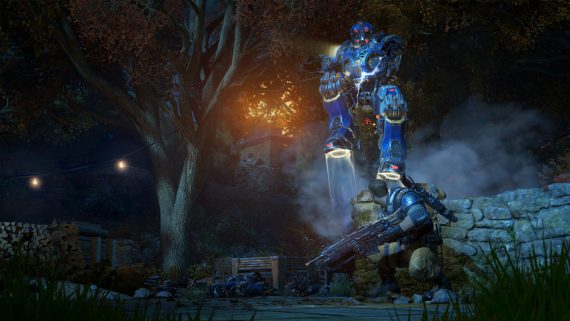 There are a lot of great elements during the Gears of War 4 campaign that has the player on the edge of their seat with excitement and a bit of nervousness. New enemy encounters are fantastic and sometimes costly until the player learns their secrets and what they must do to combat them. There are a lot of moments that have co-op written all over them when it comes to dealing with certain enemies. While I haven’t played co-op yet, I can already get a good sense of the help a second player would provide with making sure they have your back when the going gets tough. The AI companions do fine work themselves though, outside of a few moments where I placed myself in a bad situation because I got too far away from them. Stay close, my friends!

Gears of War 4 does an excellent job of progressing forward and keeping the combat interesting through introducing new enemy types. There are a lot of tough baddies to deal with, and some that really are fearsome. However, one of the biggest factors in creating a unique atmosphere is the environmental factor of Windflares that are like massive tornadoes and dust storms in one. These appear often during the game’s five acts and never get old. Not only are Windflares awesome to see and experience, but they also affect combat and become an environmental hazard that the player can use to their advantage during battles.

It may be windy, but Windflares are freakin’ awesome and electrifying! 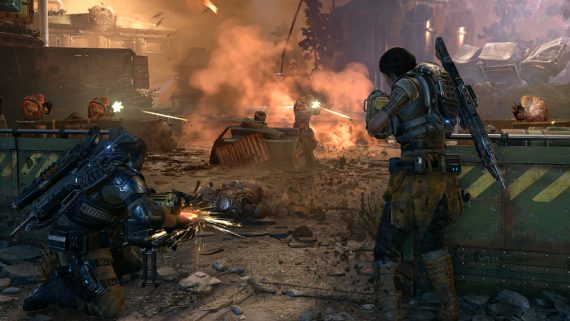 Gears of War 4 features the recognizable gameplay that we all know from the previous games. It’s still just as fun to rev up the chainsaw on the lancer and dice through bots and monsters. Another feature that’s fun to do is yank an enemy from the opposite side of cover and pull him across for the player to then perform a killing blow with a knife execution. That definitely adds excitement to a cover-based system.

Being able to pull enemies across a barrier and perform an execution is so much fun that it’s almost a bad thing. I found myself being aggressive far too often while attempting one of the special takedowns. They’re awesome to do, but players will take a lot of damage if they don’t time their opportunities just right. Plus, the enemy AI is smart. Often times when running at the enemy and stopping on the other side of them, they’ll jump over and kick you before you have a chance to grab them. Again, there’s lots of unique and fun combat going on here.

The wide range of weapons also makes the gameplay fun as the player is often tempted to pick up guns that are lying around to use in different combative situations. One of my favorite new weapons is the Dropshot that allows players to launch an explosive projectile that, on command, will drop into the ground below and explode, killing anything nearby. These projectiles can also land on an enemy and blow them up as well. It’s an awesome weapon that also sucks when it’s a heavy enemy shooting it back at you. Ah, good times! 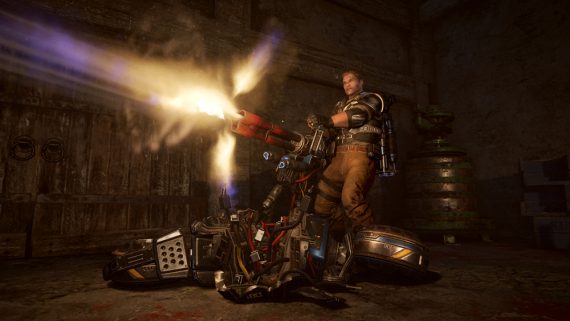 Gameplay also features a couple of interactive-type moments where the players must navigate past objects that are moving towards them by simply pressing the stick left and right. During these moments players can still shoot guns while avoiding the oncoming objects. These segments are fun even though it’s not as exciting as I had hoped. Still, this includes time on the motorcycle; you know, that awesome looking ride from the collector’s edition? Yeah, I want that even more now.

Gears of War 4 features a dark tone to the game, but never has it looked more beautiful. A lot of the areas that players explore are towns and buildings that have long since been abandoned, to the point where nature is claiming them back. This leads to a really colorful experience in the game. There’s green grass, flowers, and colorful trees that make the setting all the more unique. It’s really an attractive game that will cause the player to stop on many occasions to check out the scenery. The lighting and shadows also stand out nicely and help build a stellar atmosphere from location to location. Moonlight and sunlight, fires, and lightning bolts all brighten the way to the very end of the game. 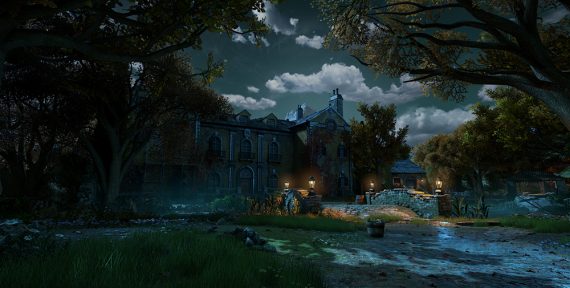 I spent my entire time playing the Gears of War 4 campaign on PC with the use of an EVGA GeForce GTX 1060 FTW. The PC performance wasn’t a perfect experience, but it was pretty darn close. I encountered a random crash earlier on and some nasty rendering that didn’t occur on a second and third playthrough, and I also discovered that the transition from gameplay to cut-scene often lagged for a moment, but besides these problems I was very happy with the game’s performance.

As mentioned, I spent the entire time playing with a GTX 1060 FTW and was able to obtain well over 60 frames per second with everything maxed out on Ultra Settings at 1080p resolution. It was actually closer to 80 FPS. Once I realized how well the game was running at 1080p, I moved on up to 1440p where I averaged between 40 and 50 FPS for the entire game at max settings.

However, between outdoor and indoor segments with each level and depending on how much is happening on the screen, I’ve had a lot of fluctuations in frame rate. I’ve seen anywhere from 30 FPS for a brief moment upwards of over 80 FPS, all while running Ultra Settings at 1440p. I actually assumed that the Windflare scenarios would bring down the frame rate quite a bit, but they didn’t slow down performance much at all.

The biggest problem I stumbled across while playing the game entirely on PC is that on two occasions my save data reverted to a previous save after I quit the game. I first encountered this when I continued from a save and progressed to Act V before taking a break. When I returned to the game my save ended up showing as the end of Act III instead of Act V. This also occurred when I beat the game. Now when I go to continue my save, the game is on Act V Chapter 2 and doesn’t let me play the final chapters of Act V without beating them again.

I did notice that my War Journal (complete game statistics) still showed my original stats without being reverted. So that’s something, at least.

Save issues are the worst, and I really hope this is just a rare occurrence as I had to replay about 2 hours of the game. Again, I only encountered this on PC as I haven’t played it much on Xbox One. The good news is that I enjoyed replaying the chapters I already beat, and have replayed chapters on my own anyway without being forced to because that’s how much I enjoy the game. 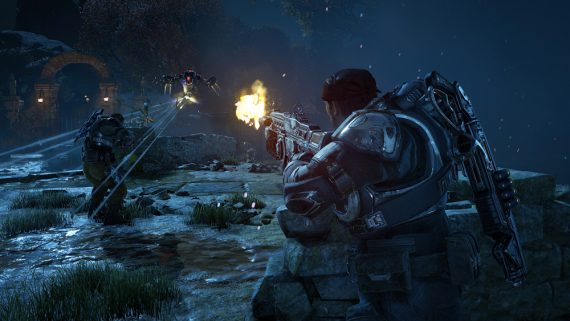 Gears of War 4 feels different, but that’s because it feels new, and it’s a great step forward for the series. There’s so much enjoyment featured throughout the campaign based around the familiar and enjoyable cover-based combat. The new knife executions are a great addition to the gameplay and the new arsenal of weapons are even better. Bring on this new threat, the player is more than equipped to handle the challenge.

Gears of War 4 features an excellent campaign that maintains interest every step of the way and only has a couple of moments that feel a little underwhelming. The combat, atmosphere, and characters all come together for an entertaining new ride into the series. Gears of War 4 is explosive, scenic, and very, very windy. Prepare to hold on tight, because Gears of War 4 can easily blow you away.