I’ve recently been spending my time with EVGA’s GeForce GTX 1060 FTW+ 6GB graphics card, playing many of the latest and greatest titles while also looking at a few older favorites to see what type of performance I can achieve by using this card. This is also my first experience with the NVIDIA 10 series graphics cards, so I was excited to get started and find out what exactly it could offer.

In this article I take a look at Gears of War 4, Forza Horizon 3, Deus Ex: Mankind Divided, Rise of the Tomb Raider, and Crysis 3. I share a great number of performance opinions and videos from these games, covering 1080p, 1440p, and UltraWide resolutions while using the GTX 1060 FTW+. I also provide a brief view into VR by sharing the performance rating of my machine and a gameplay video from one of the games I recently played while using the 1060.

Gears of War 4
I’ll start off with Gears of War 4 as it’s the game I’ve recently spent the most time with. First of all, it’s a fantastic experience on the Windows 10 store that hasn’t given me many issues at all. The performance has been nearly flawless as I completed the entire campaign with the use of the EVGA GeForce GTX 1060 FTW+. I also went back and played multiple levels at different resolutions with different cards to get a good comparison. Complete comparison coverage between the 960, 1060, and Titan X can be found here.

First of all, with all settings on Ultra at 1080p resolution, Gears of War 4 runs very well and maintains an average above 80 frames per second. However, as I’ve noted in the benchmark article for the game, it does fluctuate a lot and has quite a few areas that average closer to 70 frames per second.

Gears of War 4 benchmark of Ultra settings at 1080p resolution with the 1060.

After staying above 70 and 80 frames per second at 1080p resolution with the 1060 FTW, I moved on to 1440p to observe the performance at that resolution. My current monitor is a 1440p G-Sync monitor, so I’m happy to say that Gears of War 4 is very manageable at that resolution.

Of course we all want to stay above 60 frames per second, especially when it comes to a first person shooter. However, I sometimes don’t mind lowering the framerate just a little bit to obtain a better image. On Ultra settings at 1440p, Gears of War 4 averages out at a decent 45 frames per second with spikes near 60 and dips in the low 30s. I did, however, play a majority of the game like this and was very impressed by the overall performance of the card to obtain respectable framerates.

Gears of War 4 benchmark of Ultra settings at 1440p resolution with the 1060.

I’m currently in the process of testing an UltraWide monitor from Acer as I’m looking at its Predator Z1 gaming monitor. It features a curved 2560x1080p display and works in great combination with the EVGA GTX 1060 FTW.

While testing Gears of War 4 in UltraWide resolution, I obtained frame rates right around 60 FPS with dips in the lower 50s and spikes upward of 70.

Gears of War 4 benchmark of Ultra settings at UltraWide resolution with the 1060.

Gears of War 4 gameplay of Ultra settings at UltraWide resolution with the 1060.

Gears of War 4 runs great with the EVGA GeForce GTX 1060 FTW, whether it’s obtaining well over 60 frames per second on 1080p resolution or pushing the performance to its limit by running Ultra settings at 1440p resolution. I was very impressed with the card during my time spent playing through the Gears of War 4 campaign.

Forza Horizon 3
Forza Horizon 3 is another game I’ve been playing a lot on PC lately. Unfortunately, it does suffer from some issues, but the most noticeable is the occasional stutter that many have reported. Still, I haven’t noticed it too often in my time with the game and found it to run pretty well otherwise.

Forza Horizon 3 handles well with the EVGA GTX 1060 FTW as I’ve been able to play on Ultra settings at 1080p resolution with anti-aliasing on. I can experience variations from the low 50s to mid 70s with these settings active. Location and number of vehicles on the screen make a big difference in what framerate is achieved.

Here are two looks at 1080p racing with Ultra settings

When it comes to Ultra settings at 1440p, it’s important to turn off anti-aliasing to achieve a respectable framerate near 60 FPS. However, again, depending on location, framerate can bounce between the low 40s to right around 60.

Here’s a video of Forza Horizon 3 at 1440p with Ultra Settings (video begins with lower settings).

Deus Ex: Mankind Divided
Moving on to Deus Ex: Mankind Divided! Once again the EVGA GeForce GTX 1060 FTW+ allows for playable performance in both 1080p and 1440p resolutions at near maximum settings. 1440p did require a lot more playing around with settings and I still settled on a framerate that shifted between 45 and 55 FPS. I actually toyed a bit with the 1080p settings as well to ensure a 60 FPS average, but even then I jump around between 50 FPS and 65+ FPS.

Rise of the Tomb Raider
Rise of the Tomb Raider is easily one of my all-time favorite games, and it’s one of the best looking PC games out there. I ran two 1080p tests, including one using DirectX 12, and discovered that on max settings the framerate went from the low 50’s to mid-70s, depending on location. When it comes to 1440p, I went ahead and settled at a framerate that jumped between 40 and 50 FPS.

Crysis 3
For my final test I went back to an old favorite, Crysis 3. With this game I was able to handle 1080p at maximum settings with ease. While dips did appear in the low 50s for a brief second, I would also see spikes upwards of the mid-70s to even around 80 FPS. When I switched over to 1440p resolution, I did lower the graphical settings to the default High setting which gave me around 80 FPS for the most part.

VR Ready
I’ve also spent time visiting the world of virtual reality lately using the HTC Vive. Because of this I made sure to run the Steam VR test to see just how ready the GTX 1060 FTW+ is for entering entirely new worlds of virtual reality. It ended up scoring between high and very high, as you can see in the image below. During this time I tested out DEXED, an on-rails shooter that played perfectly fine with the 1060. 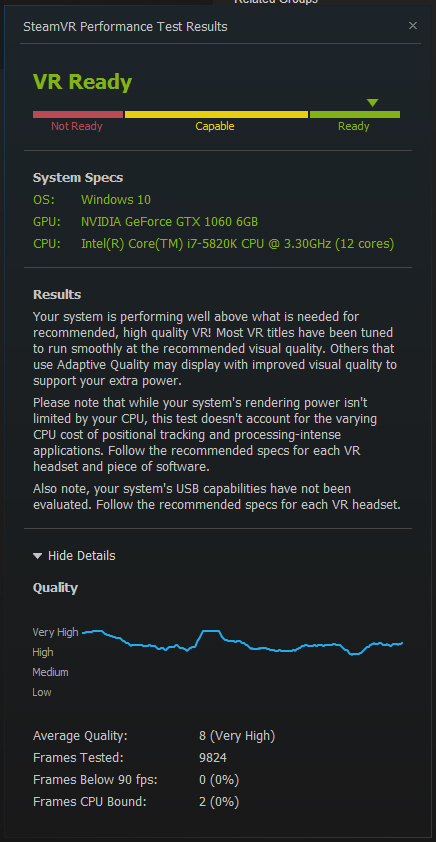 Final Thoughts
The EVGA GeForce GTX 1060 FTW+ is a great card for 1080p gaming, and it even proves to work fairly well for those with a 1440p monitor looking to hit that resolution. Most newer games at 1440p will need to be lowered from Ultra to High settings to achieve closer to 60 FPS, while older and less demanding titles will likely be much better off for reaching great frames at max settings. However, if players don’t mind playing at a lower framerate, closer to the 30 to 45 range, the card has shown to handle Ultra or near Ultra settings at 1440p. Again, anti-aliasing will likely need to be turned off, but testing has definitely shown that the 1060 has some kick to it for 1440p gaming.

I’ve also learned that an UltraWide gaming monitor of 2560×1080 matches up great with the 1060 FTW+. This resolution at Ultra settings has given me right around an average of 60 FPS in each game I’ve tested with the monitor.

The EVGA GeForce GTX 1060 FTW+ proves to be a strong card for those playing many of the latest games like Gears of War 4 or Deus Ex: Mankind Divided. It also shows that it plays well with older titles that demand a lot from a graphics card, such as Rise of the Tomb Raider and Crysis 3. It’s definitely a smart option for anyone looking to play maximum settings at 1080p, and even then most of these tested games reach a frame rate in the 70s and 80s with those settings.

I certainly like what I’ve experienced with the EVGA GeForce GTX 1060 FTW+ and would be very satisfied with it as a 1080p gamer.

Make sure to follow my YouTube channel and Twitter page for more. There are many new releases coming out in the near future that I plan to test out with the 1060 and more. Also, feel free to request a performance video with any game at any settings and I’ll do my best to fulfill that request in a timely manner.

Wait just a second!
And time for one last UltraWide video with the EVGA GTX 1060 FTW+. Take a look at the first level in Battlefield 1 at maxed out settings, plus upscale, while maintaining above 60 frames per second.