The original XCOM – I’m talking about Enemy Unknown in this case, not UFO Defense – was a spectacular reimagining of my all time favorite strategy game that cut out all the unnecessary bits and polished up all the awesome stuff to make, arguably, another all time great. The enhanced version that was Enemy Within made things even more fantastic with the addition of gene modifications and cybernetic enhancements. It was the sort of thing I didn’t think needed a follow-up or sequel. Then along comes XCOM 2.

Much like Terror From the Deep, XCOM 2 picks up some time after the events in the preceding game. However, this time it’s already too late to prevent a full-scale alien takeover. About 20 years too late, in fact. Mankind has formed an alliance of sorts with the former alien menace, but of course it’s more of a totalitarian regime than a true peaceful coexistence. The XCOM Project has long been forgotten, the council nations have disbanded decades ago, the aliens have control and influence over everything, and The Commander has been MIA through all of it – until now. 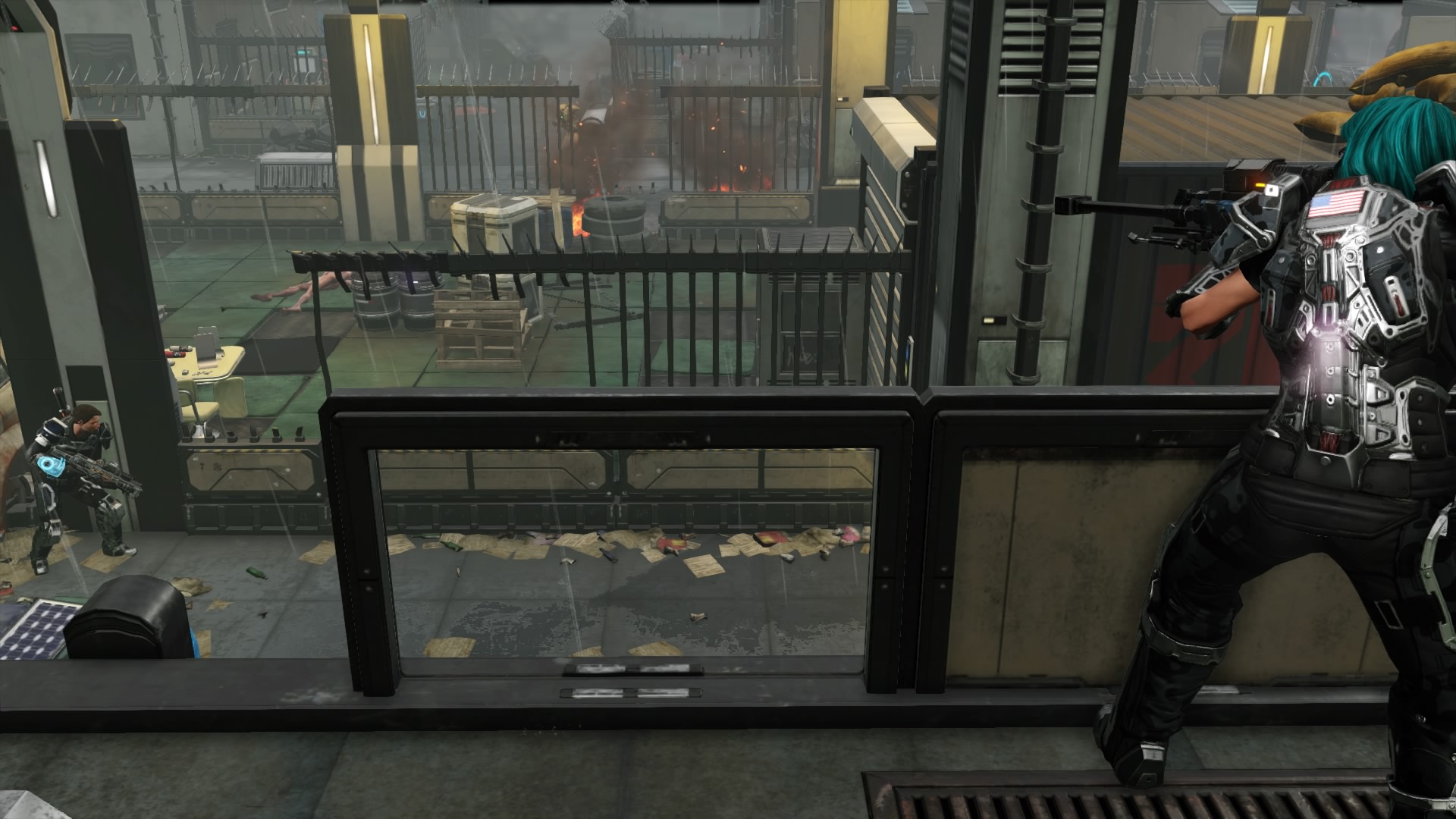 Turns out The Commander has been an alien prisoner for a very long time, and the events of XCOM 2 begin just as the legendary strategist is being rescued by a rag-tag team of under-equipped and out-gunned soldiers. Turns out there are some people out there who never game up on The XCOM Project, and now it’s your job (as the newly-recovered Commander) to help the resistance fight back against the alien oppressors.

Much of the turn-based gameplay from Enemy Within and Enemy Unknown remains, with the same movement and cover systems, the same two-actions per soldier approach, and so on. However, a lot of small (and some big) tweaks have been made to make XCOM 2 stand on its own. It also stands head and shoulders above the previous games, but I’ll get into that in a minute. 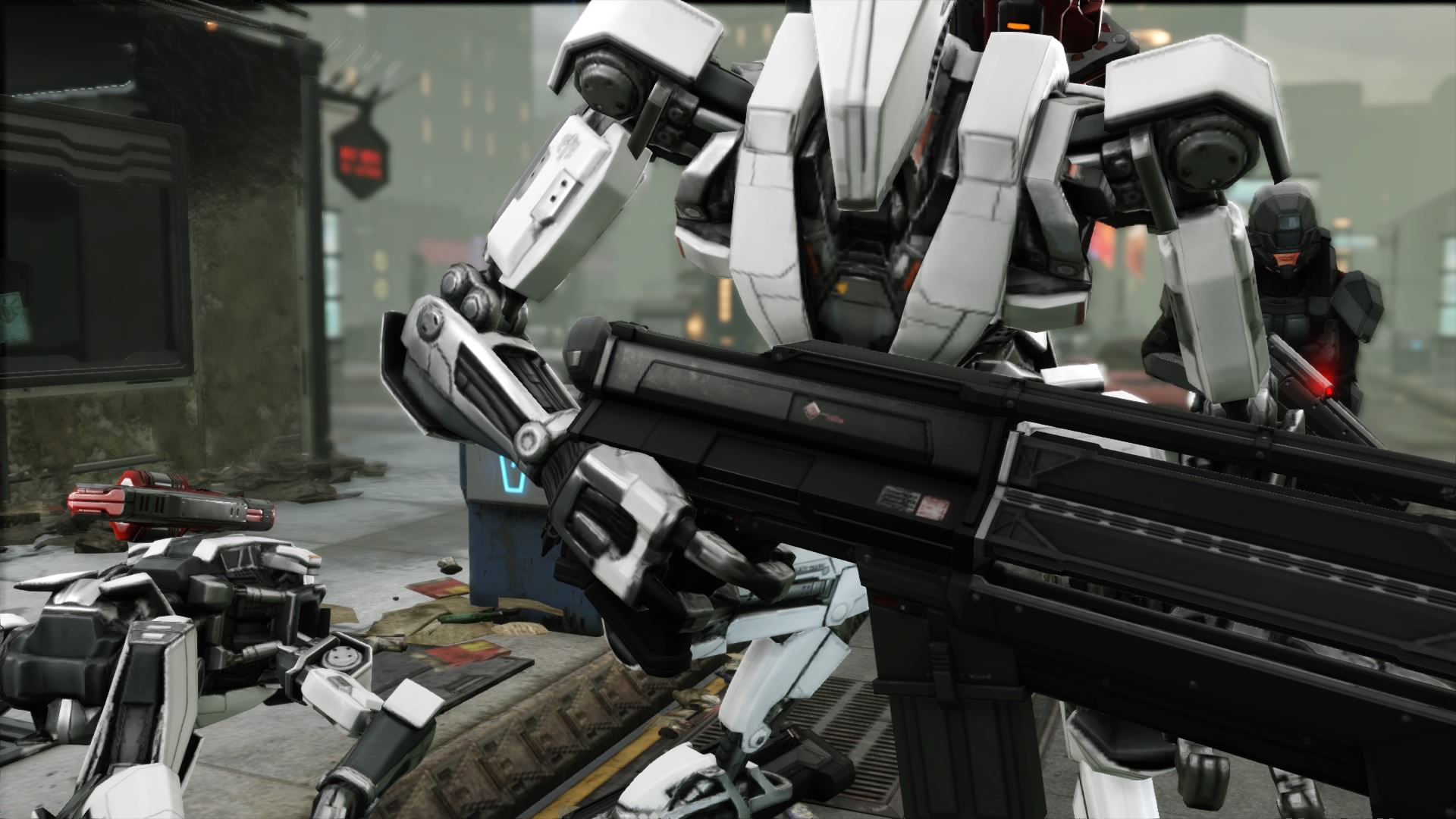 The general feel and pacing of the game has been tweaked to evoke more of a “desperate underdog trying to take the planet back” feel than “fight off the technologically advanced invaders.” Several missions (though not all) have some sort of round timer that’s tied to the main objective, which caused a bit of a stir when first revealed. I can understand why some players night not like being held to a strict time limit, but I actually really like it. Having less time to complete a mission creates a LOT more tension and forces you to take more chances than you might have in the past. Granted sometimes those chances will get your soldiers wounded or killed, but they can also lead to some pretty amazing victories. I also prefer how it discourages “turtling” (i.e. taking baby steps and always putting every soldier on Overwatch), which was an effective but ultimately rather boring strategy.

Stealth is also a huge part of many of XCOM 2’s missions. As you’re controlling the resistance movement in an already occupied location (in this case the entire freaking planet), guerrilla tactics are essential. Most ground missions begin with your squad concealed from nearby alien patrols. It allows you to see them before they see you, occasionally avoid confrontation entirely if you’re careful, and set up devastating ambushes. Once you’re spotted or you attack the squad will lose the element of surprise, though. I freaking adore this mechanic. It does a great job of capturing the feeling of a resistance fighting against an oppressive force, it makes missions even more intense when coupled with the round timer, and it feels so unbelievably cool to watch a well-planned ambush pan out. 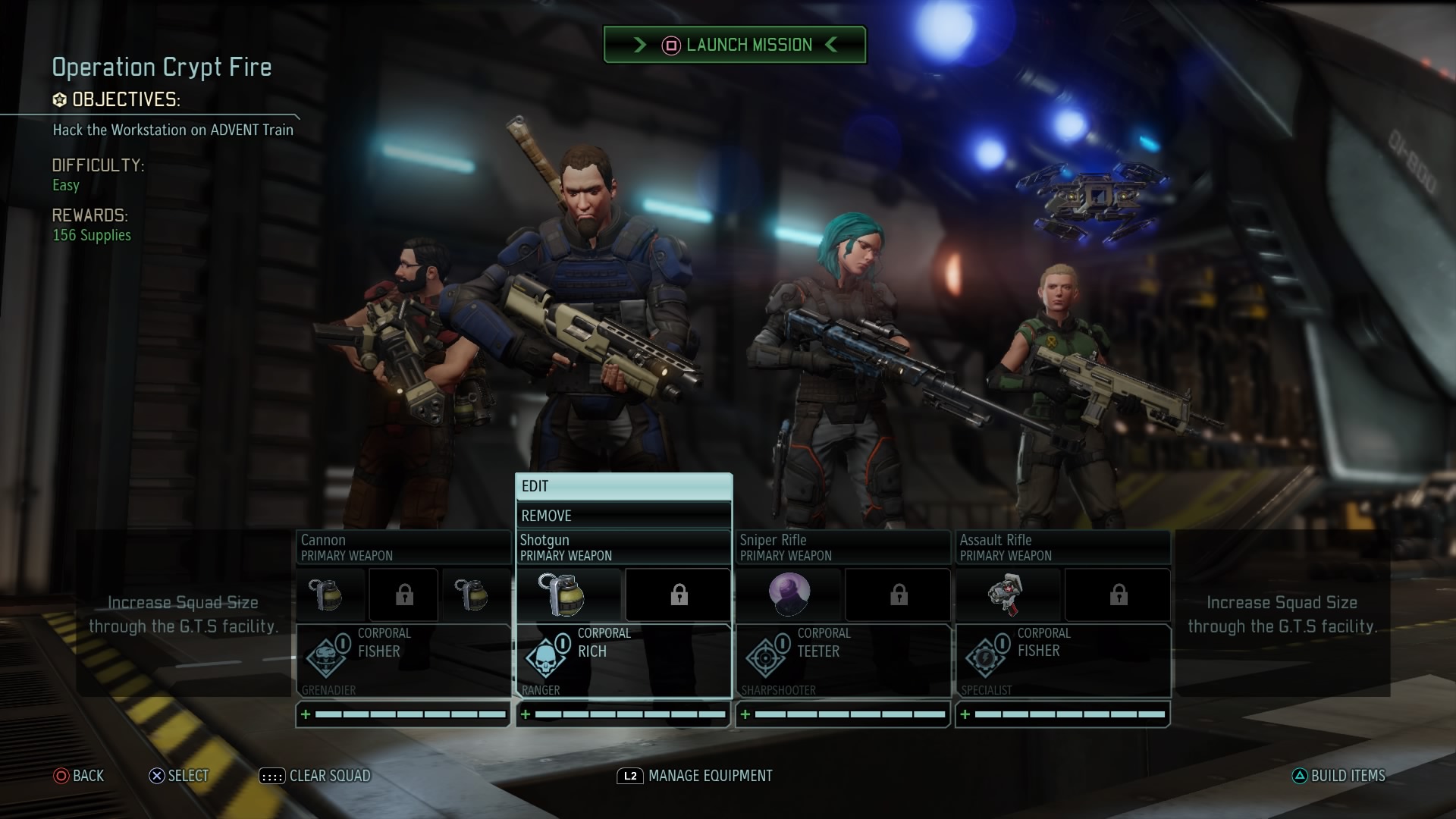 Another big change comes by way of the Geoscape. Once upon a time it was just a means to fast-forward time so that you could finish constructing rooms or complete research. Now it (still) does both those things, but it also changes things up quite a bit. There are all sorts of new events that can pop up, such as familiar UFO landings and terror sites, but there are also opportunities like supply caches you can loot or alien convoys to attack and pillage for resources. Then there are Dark Events, which will grant the aliens different kinds of benefits if you don’t complete specific missions to cancel them out. And of course, you can’t stop them all.

I’ll admit that the constant location-hopping can sometimes get a little irritating – especially when you just want to finish that stupid autopsy on that stupid alien trooper, but events keep popping up and now you have to fly to India because if you don’t do something about that Dark Event things are going to get so much harder for you – but it also makes what used to be an afterthought far more engaging. If nothing else it at least gives the illusion of more choice, and makes you feel like you’re really taking part in guerrilla warfare against a far superior force. 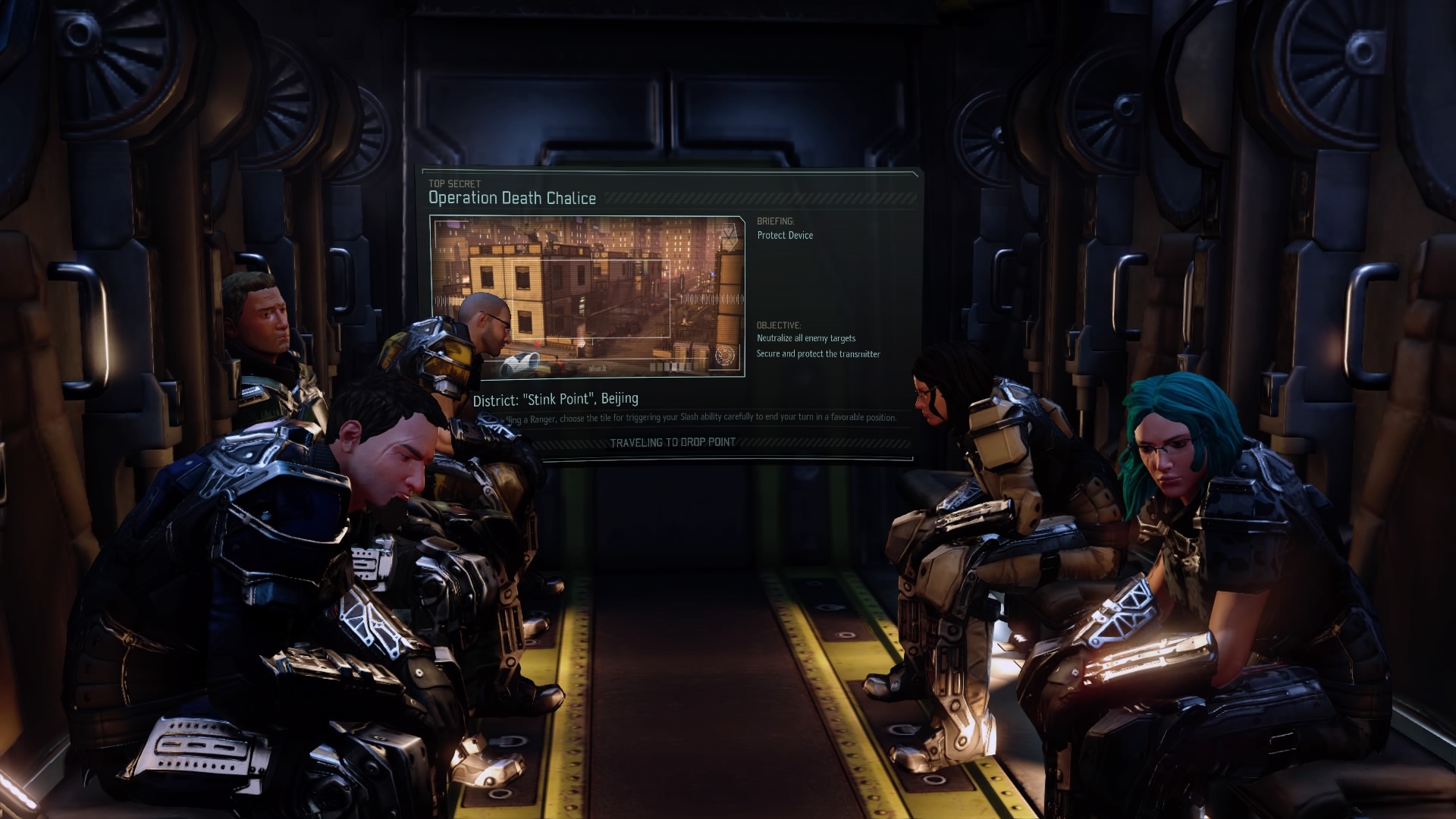 Finally, there are the soldiers themselves. Holy crap. For starters, all of the previous classes have been drastically reworked and rebalanced. Snipers are now called Sharpshooters, and the ever-popular squad sight ability is the very first thing they learn. Support soldiers can now pull double duty as both healers and hackers (and oh, you’d better believe that’s important). The Assault class has been renamed Ranger, and while they still focus on up close combat they can also specialize in melee and stealth. As with previous games your soldiers will start out kind of sad and pathetic, but once they start to gain ranks and new abilities they can become one hell of a force to be reckoned with.

One of my absolute favorite aspects of the earlier reboots is soldier customization. I loved being able to put myself and my friends/family/coworkers/whoever else into my squad. I loved being able to choose custom colors for their armor (I usually made it correspond to their class). I loved having a handful of tweaks that I could make to their outfits to give them just a bit more of a personal touch. All of that has been retained and drastically improved here. There are way more armor colors to choose from, as well as primary and secondary designations. There are several different options for the arms, legs, and chest. There are more hair styles, as well as added details such as hats and glasses. Heck, once they rank up enough you can even adjust things like armor patterns, attitudes (which can affect their idle stance and mission dialog), tattoos, and facial scars. If you thought you got attached to your favorite soldiers before, you haven’t seen anything yet. 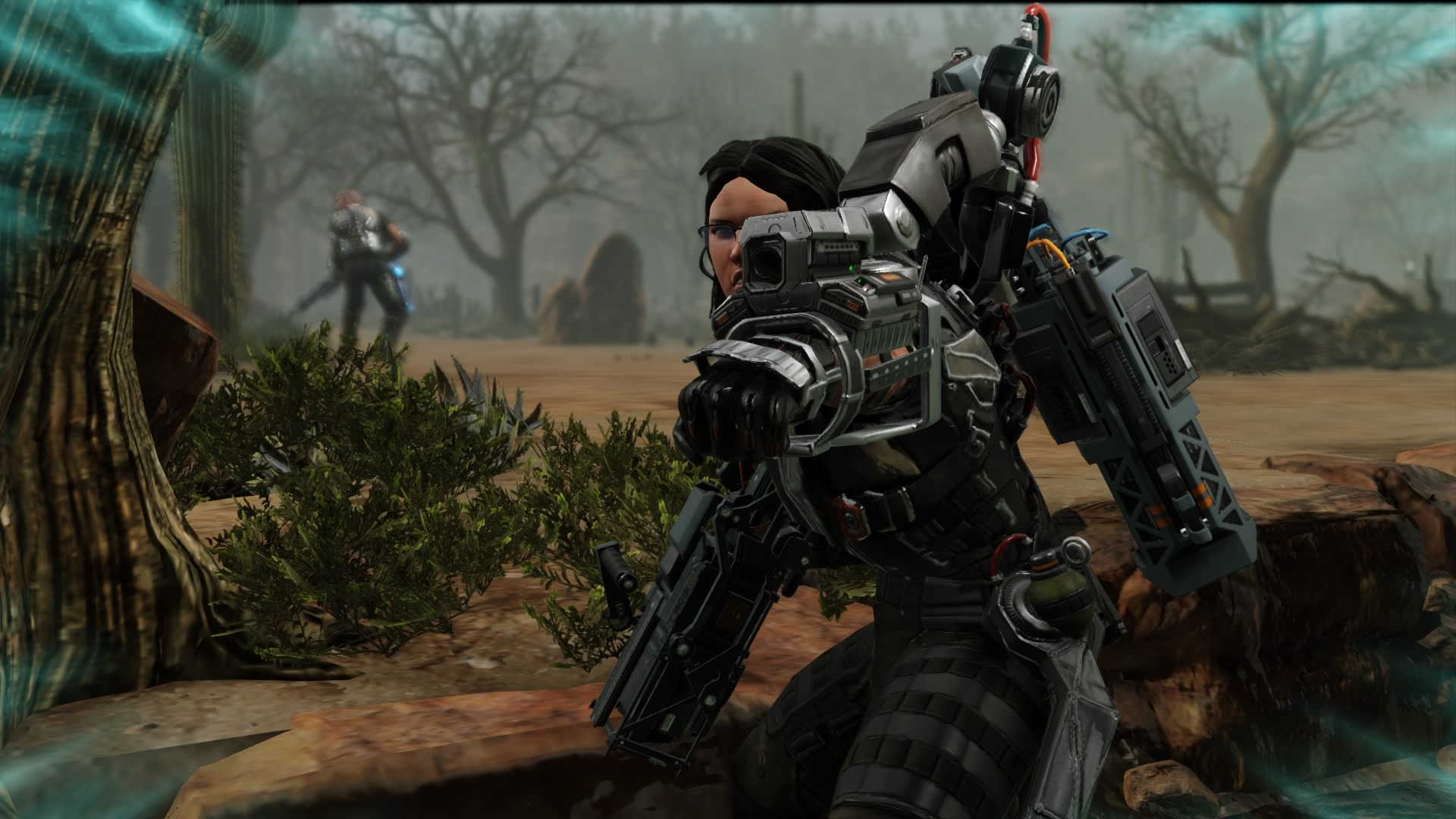 The new tech also feels like a more refined step up from the last game. I’m not talking about a simple “this is now this” swap, either. Upgrading from your default weapons to the middle tier feels much more natural and necessary this time around (no more pushing straight from ballistics to plasma this time around). Extra equipment like flash grenades are far more useful than they once were. The new armor types allow for a bit more experimentation when it comes to matching gear with different soldier classes (the exo suit is kind of awesome no matter who you put it on). Not having to focus research and development on aircraft this time around doesn’t hurt either, since it allows you to spend your time focusing on turning your troops into unstoppable killing machines.

Even the underlying mechanics have been given small but very worthwhile improvements. Not just things like stealth or the Geoscape, but also building new stuff. Once upon a time you had to develop things like plasma rifles and plated armor one piece at a time, then equip them on individual soldiers. Now it costs more to engineer new weapons and armor, but doing so will automatically equip your entire fighting force. So if you cough up the resources necessary to make magnetic rifles, every single soldier – from rookies to veterans – that uses basic rifles will start using the new tech. No micromanaging gear, no making sure you manufacture enough of a given weapon, and of course no muss or fuss. 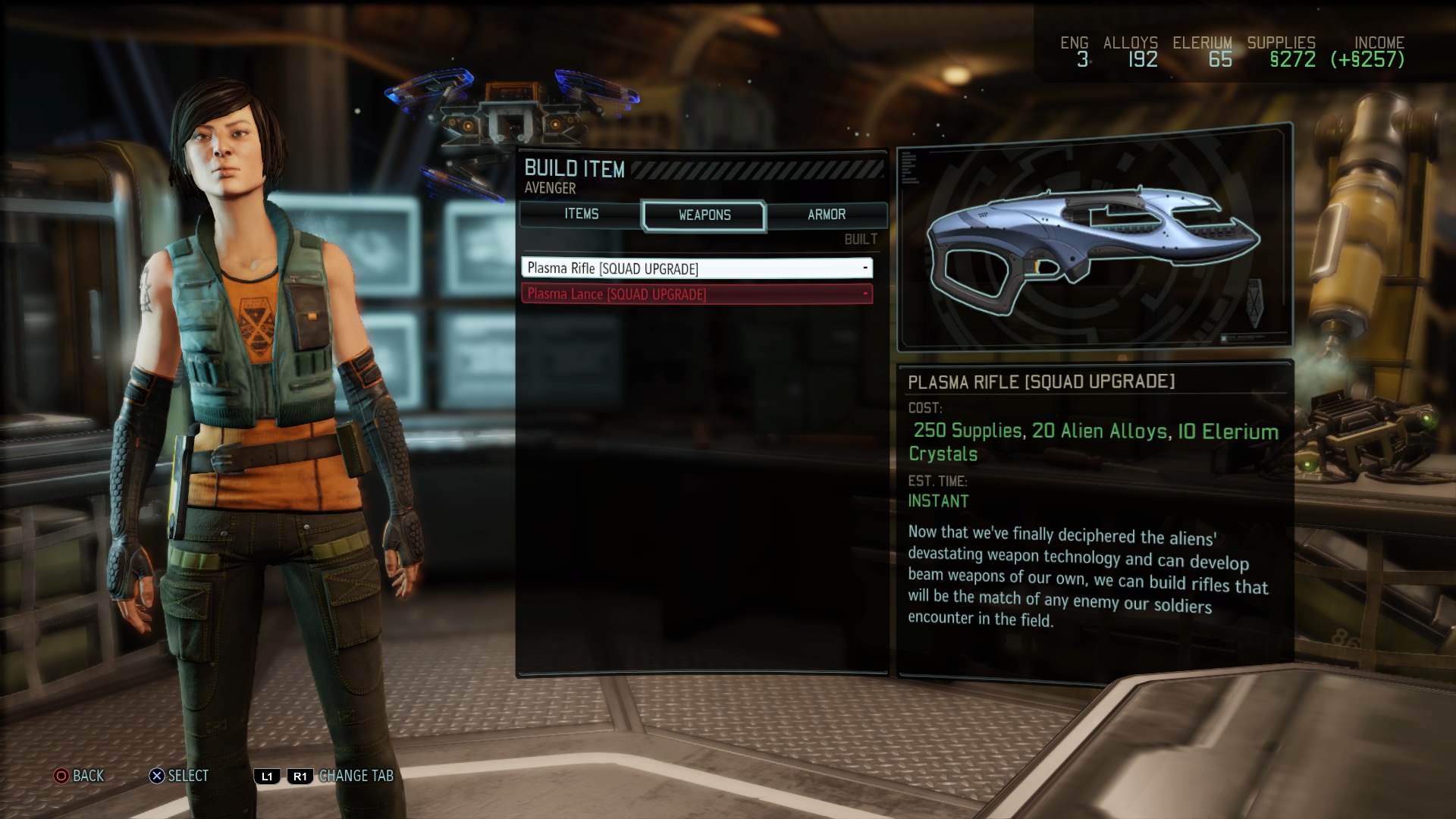 Room construction has also been changed so that instead of spending resources to carve out a space and then spending even more resources to build something, now you actually earn resources for clearing out a space. On top of that engineers or scientists can also be stationed in some rooms in order to increase their effectiveness. It’s a simple adjustment, but it goes a long way toward making the people not on the front lines feel a lot more like people and less like numerical commodities.

I didn’t think the first XCOM could be significantly topped, then Enemy Within came out. After that I didn’t think we’d see another equally significant jump in awesomeness, but XCOM 2 proved me wrong yet again. Also – quick shout-out to the sound design, which gives some serious weight and impact to everything from the thump of weapons fire to the crunch of boots hitting the ground as soldiers exit their dropships. It’s an amazing game that only suffers the slightest bit from things like occasionally obnoxious Geoscape interruptions and some oddly long load times that are noticeably shorter on PC. Even on my extremely underpowered MacBook. 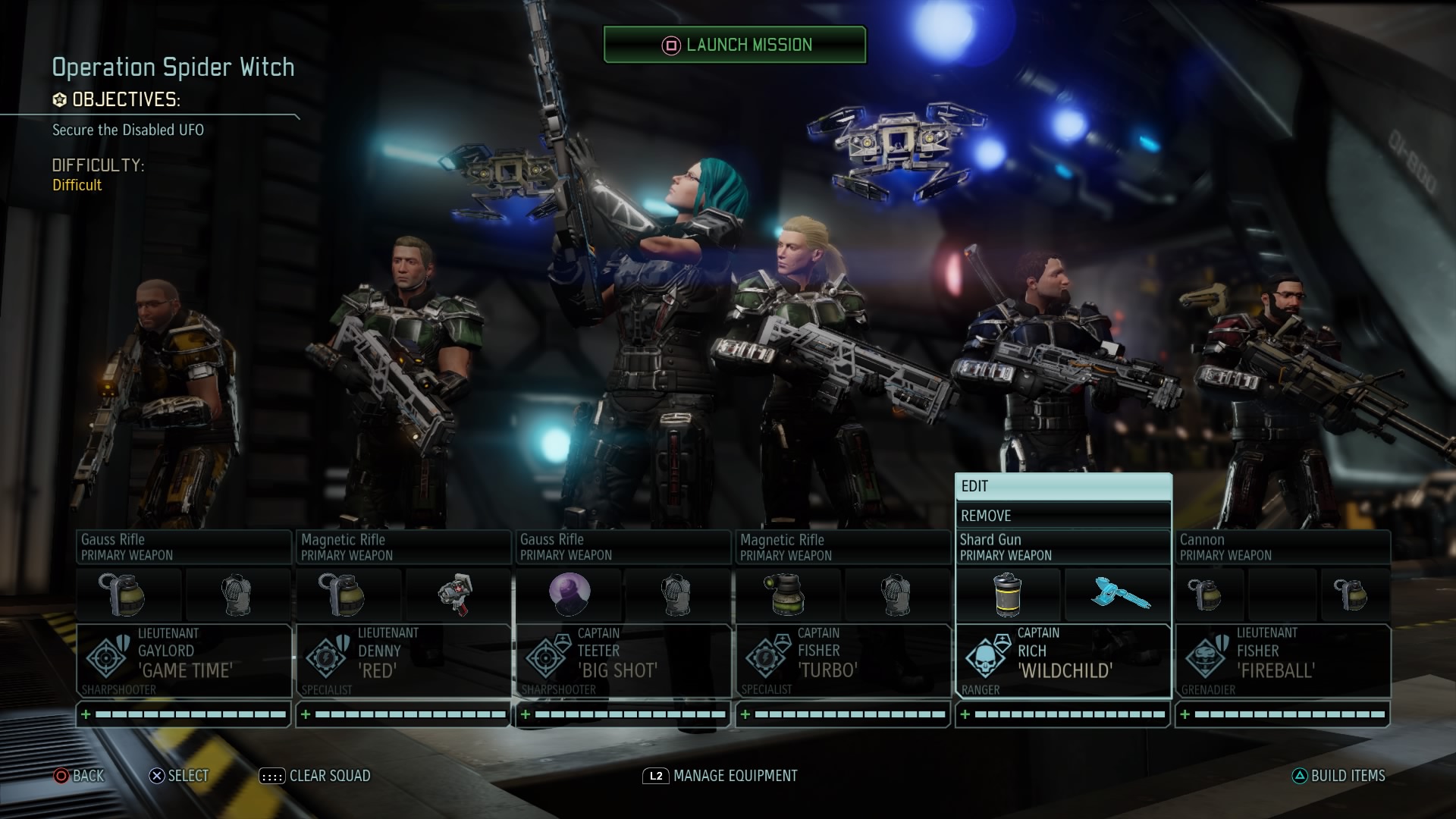 Anyway, yeah, XCOM 2 is flipping fantastic. If you’re a fan of the original (the ORIGINAL original), or if you’re a fan of the reboots, you absolutely need to check it out. If not, well, you should still give it a shot if you like strategy games because it’s, as I’ve said, flipping fantastic. I’d say I can’t imagine it getting any better than this, but given Firaxis’ track record at this point I’m not so sure.