I’ve been crazy about Battlefield 1 since I first played the multiplayer beta. I remember how the beta reminded me that I was still playing a game in the Battlefield series, yet at the same time I could also tell that it had something special going for it. Normally I don’t put many hours into a beta, but I did with Battlefield 1.

Not long after, thanks to Origin Access, I got my first look at the game’s War Stories campaign by playing through the first two excellent missions. Right then and there I knew this was going to be a fantastic experience. And then came the launch of Battlefield 1 and that’s when I completely fell in love.

Battlefield 1 is easily one of my favorite games of the year, and it’s certainly one of my most played games this year. I loved every moment of each individual story in the War Stories campaign as it did a better job of connecting me to those characters in a short span of time than most other games do throughout an entire campaign. It’s easily something special. Read more of my thoughts here.

I also regained my competitive spirit through Battlefield 1 by immersing myself in its excellent multiplayer gameplay. I’ve been addicted to it since the game’s release.

So pretty much I love everything about Battlefield 1. I was even fascinated by The Art of Battlefield 1 from Dark Horse to get an even deeper look into the creative process of the making of the game. It’s very intriguing to go through the art book, read the comments from the creators, and look at some of the lovely concept art.

And now to continue sharing my love for Battlefield 1 I’m taking a close look at the Battlefield 1 Collector’s Edition, which by the way went on sale this Black Friday on Amazon for $49.99. It’s the collector’s edition only – no game is included. 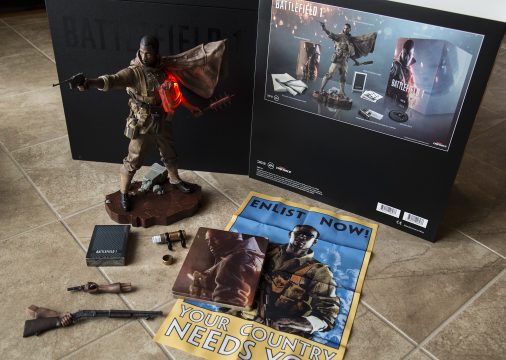 The Battlefield 1 Collector’s Edition comes in a sturdy enough box that is of decent quality. All the items inside are packaged safely. Upon opening the box, owners will find a Steelbook case, playing cards, a messenger pigeon tube with exclusive DLC content, an exclusive patch, and of course the 14’ figure.

All of the contents are of good quality outside the cheap plastic pigeon tube. However, it’s still neat to open it up and pull out the piece of paper with the DLC code on it. Thanks, pigeon! I must note that I actually didn’t have the patch in my box which is a little disappointing. However, the official Steelbook case is nice with the soldier and brownish-gold color on the front and the smokey blue color on the inside. There’s also a small cloth with a soldier on the front that says ‘Enlist Now’ and ‘Your Country Needs You’.

I must also note that I don’t want to open the playing cards at the moment. I want to leave it wrapped in plastic for the time being, at least. I’m being a bit of a collector that way, I guess. 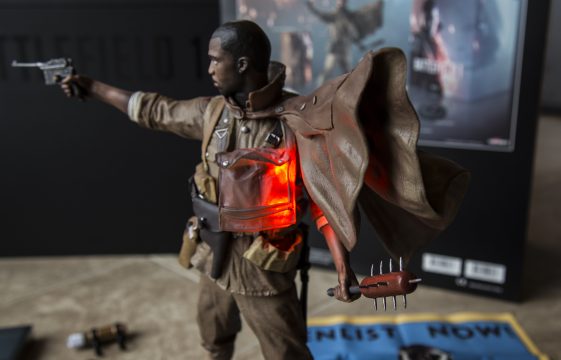 When it comes to the Battlefield 1 figure, I must say that I absolutely love the weight and quality of the soldier. It’s actually heavier than any other figure that I currently own. The detail of the soldier is fantastic as well – he simply looks awesome.

One of the best features is that the figure actually comes with an alternative left and right hand that are holding different weapons. The two interchangeable right hands have two different types of pistols, while the two left hands have either the spiked club or the shotgun. Both set-ups can be seen in the images below. Unfortunately, the left hands are made for the left side and vice versa, so owners won’t be able to equip the shotgun, which is in the left hand, on the right-handed side of the soldier. That doesn’t bother me at all, though.

Another feature of the soldier is that the pack that sits on the left side of his chest and stomach actually lights up. The figure uses two triple A batteries that are placed in the bottom. There’s an on and off switch in one of the removable rocks on the platform of the statue so owners can easily turn the light on and off. I must say that it’s neat when it’s on, but it’s certainly not needed. And I’m not sure what type of lighting device he has in his pack for it to be able to do that! 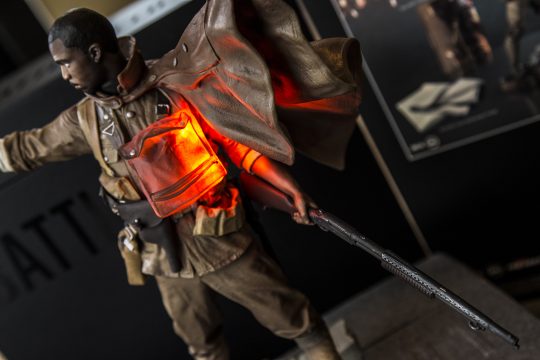 I really love the Battlefield 1 Collector’s Edition. The statue is fantastic, from head to toe. The quality is amazing, the weight is nice and sturdy, the platform he stands on looks great, and the interchangeable weapons are really cool. I should also note that the removable hands/weapons do require a bit of a tug on the statue to remove them and a strong push to place them back in. Because of that, I’m not too worried at all about them ever easily falling off. Maybe that might happen sometime down the road after a thousand changeovers, but no one should ever be doing that.

The Battlefield 1 Collector’s Edition is fantastic and the perfect addition to any fan’s collection. For me personally, the statue and Steelbook case are the best features of a collector’s edition, but the playing cards are a cool idea and the downloadable code in the pigeon tube is fun. The cloth is also a nice addition and I assume the patch is pretty cool, if you happen to get it. Overall, I couldn’t be more satisfied with the Battlefield 1 Collector’s Edition.