Let It Die: Combat to Die For 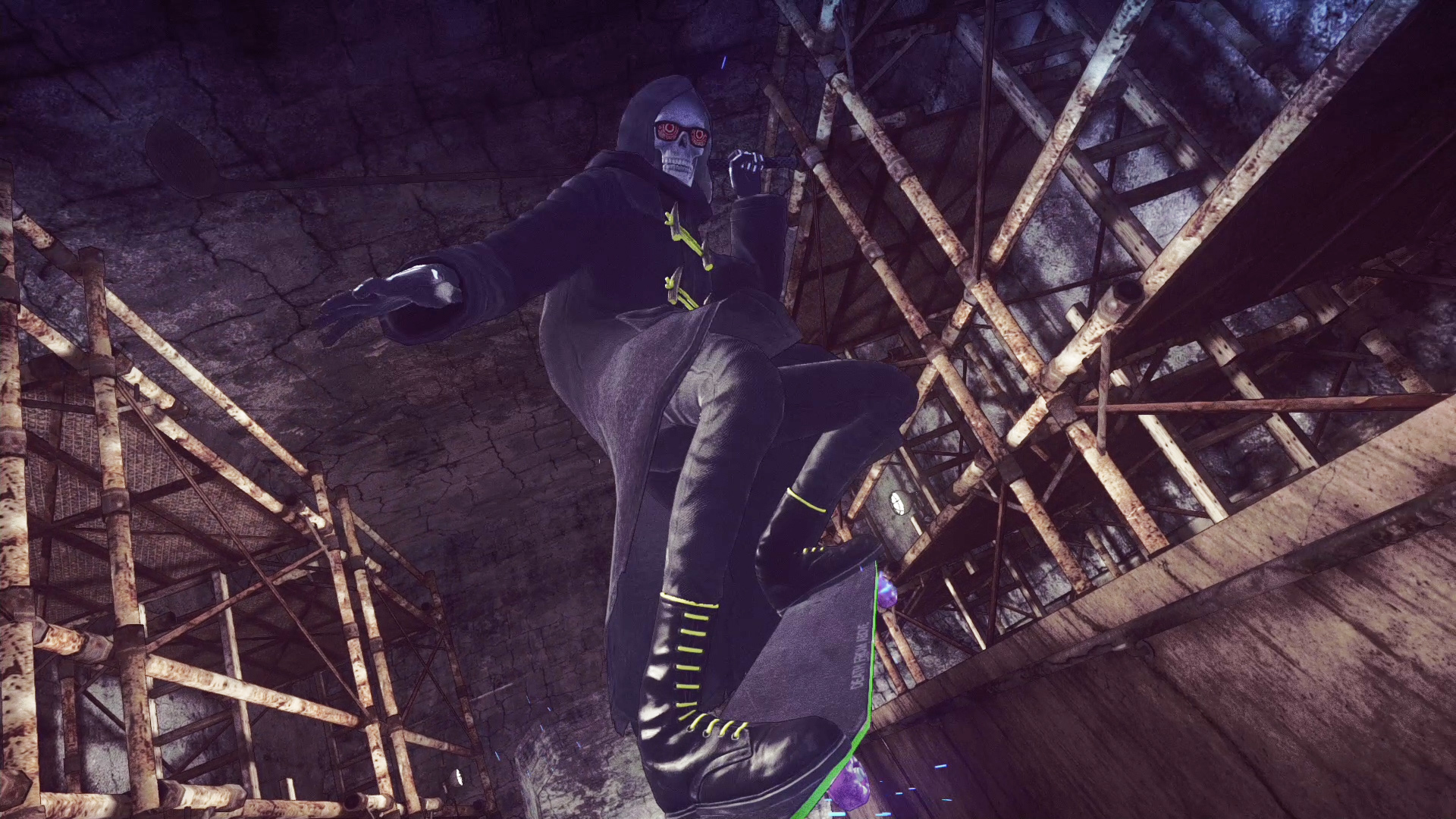 Let It Die is an upcoming free-to-play action-survival game developed by Grasshopper Manufacture and published by GungHo Online Entertainment America exclusively for PlayStation 4. In the game, Uncle Death – a silly skateboarding grim reaper – tells the story of a great tower that rose from the ocean with many mysteries hidden inside. Players who attempt to climb up the great tower will encounter various enemies to fight and many mushrooms to eat that heals the player and helps them stay alive. 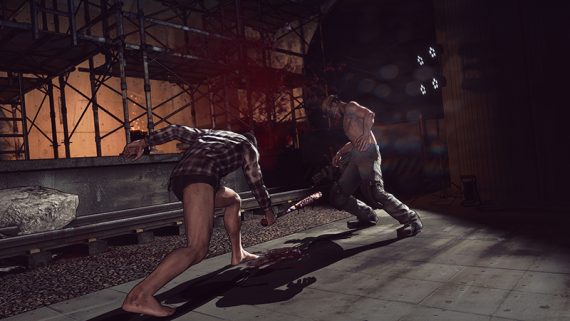 I had the opportunity to play about three hours of Let It Die during a recent press event to get a good feel for the game and how it operates. During this time it was easy to tell that the main draw is going to be its combat and experiencing what enemies and bosses await in the floors ahead.

The three hours of time that I spent with the game flew by incredibly fast. I enjoyed my somewhat slow and careful approach while wondering what type of enemies awaited me around every corner. I didn’t know if I was going to face one or multiple foes at once, which multiple enemies are a dreadful experience as a single guy can be more than enough of a challenge to deal with. There’s also the chance I would run into a Hater, which is an enemy consisted of another player’s death data, and what makes them the worst is that they can perhaps be at a higher skill level than you.

I became so captivated by wanting to see what type of enemies were ahead of me and how many floors I could progress to during my time with the game that I actually forgot to look at a lot of the other features in the game. I became all about the progression and combat and wanting to see what came next.

This is a good thing because I didn’t get tired of the combat and performing special killing moves known as Goretastic Attacks and Goretastic Finishes. It’s also exciting coming across a boss for the first time. Encountering the first boss made me excited for the second boss, even though the second boss ended up being quite the undertaking. 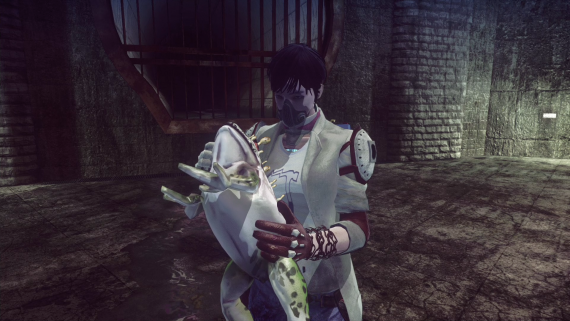 I enjoyed myself while just playing Let It Die for those three hours during my preview. I didn’t pay close attention to a lot of the unique features with the game, such as finding blueprints and earning new weapons. I just collected the weapons that were dropped from enemies and played with those. I also didn’t look into the team-based asynchronous combat known as Fort Mode because I was having too much fun climbing up the tower.

Honestly, during a follow-up interview I found myself amazed at how little I discovered about the surrounding features of the game. There’s a lot of depth with collecting characters and placing them in the freezer (storage) and having additional characters that can achieve higher skill levels for combat. My first character maxed out at level 25, but as players progress up the tower they’ll be able to obtain different types of fighters that can achieve higher ranks.

I had too much fun laying down the Goretastic moves on the enemies that I missed out on a lot of the additional features. The good news is that I can’t wait to experience it the next time! Players start out in nothing but their underwear, and they must progress forward through one floor after the next while fighting off enemies and collecting loot along the way. This can include new gear to wear, weapons, coins to use toward purchasing special abilities, and blueprints for creating better weapons that have a full lifespan. Weapons that enemies drop usually have a very low lifespan and will break much sooner.

It’s a strange feeling starting out mostly naked, but it makes collecting any type of clothing and armor along the way that much more interesting. If I always had jeans and a t-shirt to begin with, then collecting some of the most simplistic looking items such as an apron wouldn’t feel interesting at all. But since players are running around in their undies, which provides a sense of being more vulnerable, it makes collecting some of the silliest and basic wearable gear even more worthwhile.

There are guns, crossbows, and hammers, along with heating irons and firework launchers, and many more interesting weapons that can be used to take down the surging combatants that lurk each room. However, there are moments where I felt far more comfortable with just using my fists in combat. Still, there’s nothing better than pulling off a Goretastic move on an enemy with each weapon – especially the gun that shoots fireworks. Uncle Death very much approves of that move!

Goretastic Attacks and Finishes are powerful moves that the player can put on the enemy once a meter is full. Each weapon has its own unique Goretastic Finish that makes the combat that much more exciting. It’s not often players find a game where they are wearing an apron and using a heating iron to pull off an amazingly awesome Goretastic maneuver that’s simply to die for. Ok, so maybe I’m hyping it up a little bit, but they are a great part of the combat that makes the gameplay very thrilling to play. 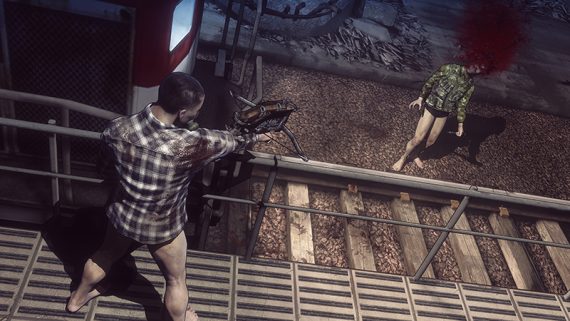 The combat can be a lot of fun, even when things aren’t Goretastic, and there are a lot of moments where timing is needed to be successful during a fight. While there are health items scattered around each floor, it’s still important to play as perfectly as possible and not take damage if players want to survive. There are many moments where combat is a bit easy going by simply taking on one or two very active enemies, while other times there can be a large group of slow moving enemies that may surprise and overwhelm the player.

Players can expect a lot of good change of pace when fighting bad guys, and that’s just from my three hours of previewing the game. Encountering a large group of slow walkers in a room that traps the player in is a scary experience and requires the player to quickly attack them before having to roll out of the way to dodge attacks.

Let It Die can be played at a quick pace, although it’s probably not always the best idea as players won’t want to deal with too many enemies at once. Moving slow and attempting to eliminate one enemy at a time proved to be a good tactic for me. While players can take multiple hits and be fine, it’s important to keep your health up as much as possible.

At the beginning of the game – or the beginning of the tower – is the basement level that is the player’s main base of operation. Here is where players will spend coins at shops to purchase new weapons with the blueprints they collected, along with purchasing abilities that can influence gameplay, such as having a higher attack boost. It’s important to return here often to save all items that were collected on the journey. Thankfully, from level to level, there is an elevator system that can take players from the basement to any floor level they wish to return to where they previously pulled the elevator switch to activate it. 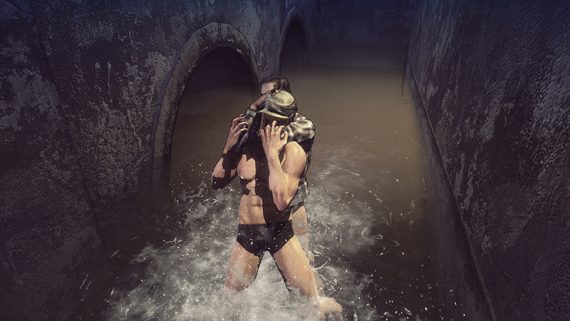 During my time playing Let It Die I didn’t die a whole lot, but I did get caught in some tricky situations and made some stupid mistakes that caused me to die. Unfortunately I forgot to experience what all happens when you die, because during my playthrough I decided to make use of the game’s insurance policy that allowed me to revive immediately after death. This kept me from losing any of my points or collected items, which made continuing a lot easier.

It’s not like each floor is very long though or super difficult to get through. I can imagine facing bosses would be the most challenging thing in the game for most players. The second boss battle is where I struggled for a minute to learn its patterns and moves and ended up dying quite often. If I didn’t have coins to use for the insurance policy, I would have to start the floor over again each time.

Let It Die can be a challenging game, but it’s certainly playable without it getting too difficult outside of a few situations and the last boss I experienced during my three hours of gameplay. I believe that players who are patient enough and progress slowly through the game can still have a great time without spending any money. Plus, from what I’ve seen so far the game definitely isn’t pay-to-win at all. Using purchasable coins to continue where I left off after dying does make the game easier than starting the floor level over again, but that’s it. The only other aspect I ran into with the purchasable coins is that players who use blueprints to unlock new equipment can speed up the time it takes for them to become available to use. The time it takes for the weapons to become available normally isn’t absurd though either. It’s only a few minutes. 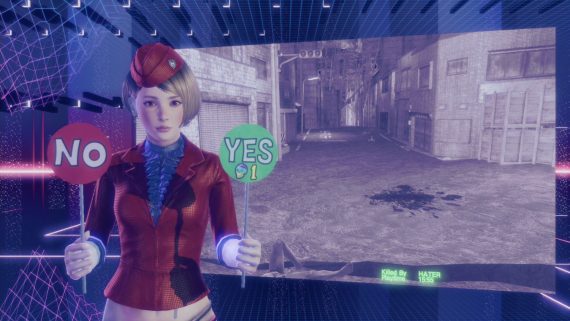 Let It Die is a free-to-play game that PlayStation 4 owners should certainly keep their eyes on. I like its action gameplay and exciting finishing moves of the Goretastic kind which could possibly make it worth the experience alone. Additionally, encountering bosses felt exciting and daunting at the same time. But it was definitely the combat that I walked away thinking about the most, and it’s probably because that’s all I really focused on during my preview. I look forward to continuing my journey up the tower and learning more about its features once the game releases. (It’s now available on the PlayStation Store).

But before I go, I should also mention that I never thought I would have this much fun fighting in my underwear! I really hope there is a cape to unlock at some point in the game – just saying.