Slowly, but surely I’ve been making my way through World of Final Fantasy on the PlayStation Vita. It’s been a wonderful companion to have by my side during what’s been a November full of travel, all the way from the west coast to the east coast. Traveling with Lann and Reynn has been a charming adventure that I’ve been able to play for 20 minute periods at a time, upwards of 2 hours or more in one sitting. So far, I’ve loved every single moment of it.

I didn’t know exactly what I was getting myself into when I first started up World of Final Fantasy. I only knew that it had a unique art style for all the main characters. It’s almost like playing with a bunch of Funko Pop! Vinyl characters at times, but way cooler.

As players first begin and get to know their coffee serving lead character Lann and his twin sister Reynn, it doesn’t take long before the player is able to really fall in love with both characters. They’re funny, especially when they begin bantering back and forth – but the banter gets even better when Tama gets involved. Tama is the helpful furry companion and navigator for Lann and Reynn as they go out on their journey.

The story of World of Final Fantasy follows Lann and Reynn as they have forgotten their memories of a past where they used to be great mirage keepers. Now they must travel to multiple locations, fight and capture new mirages, and discover secrets that lead to regaining their lost memories.

World of Final Fantasy certainly feels like your regular RPG in some elements, but it becomes more exciting with the addition of collecting mirages. Mirages are enemies that the player must capture in battle. Once the player captures a mirage they are able to use them and their abilities for a number of things, but most importantly for stacking on top or below Lann and Reynn, depending on size.

Stacking mirages is actually really interesting and fun as it allows players to establish different skills and attack strength based on the mirages that they stack together with the main characters. Stacking is like building a party, except the party is on top of your head.

Different mirage types are found in different areas of the world, and each mirage has unique skills that can be learned and used on enemies that are weak to a certain attribute. It becomes a fun mix and match game when it comes to stacking mirages on the heads of Lann and Reynn. 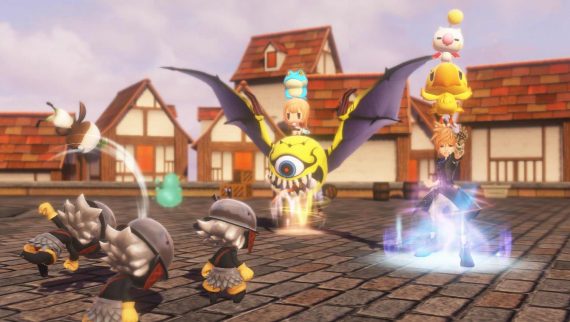 It’s also interesting coming across simple puzzles where players must stack mirages on top of a platform and meet certain criteria for the platform to unlock and allow the player forward to find a treasure of some kind. I wouldn’t really call it much of a puzzle though, as players only need to follow the requirements in order to get it right, but it’s still somehow interesting nonetheless.

There are also areas that players need specific mirages equipped to continue onward. One example is needing a fire mirage to melt an ice block that would otherwise prevent the player from moving forward. Passing through these locations are as easy as having a fire breathing mirage equipped. It’s not a puzzle or a challenge, however I still appreciate the need and cause of having that mirage with me.

While there is a lot of depth and experience to manage in World of Final Fantasy, it does come across as a more easy-going RPG that anyone can pick up and play and absolutely enjoy. It does a fantastic job of keeping the player interested with good combat, a lot of managing of different mirages, interesting and quirky characters, along with good banter with silly one-liners that fully round out the overall experience. It’s not the typical Final Fantasy game, but it’s so good and charming. I love the adventure that’s been set in front of me in World of Final Fantasy. 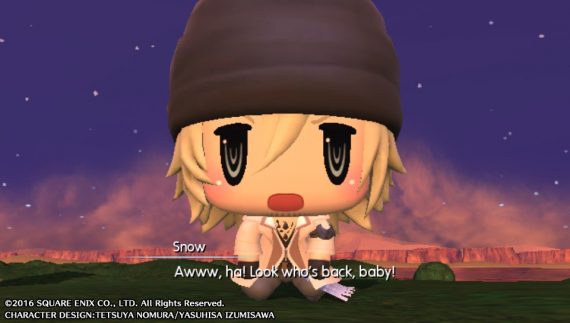 It gets even better for Final Fantasy fans when they come across favorite characters from past Final Fantasy games. These characters have an introduction and brief inclusion in the game, but ultimately end up being used as a special ability during battle. Players can collect them by obtaining what’s called a Champion Medal. Once the player equips the medal (only 3 can be equipped at a time) they are able to charge up a meter and summon their favorite Champion into battle. They pack a good punch too!

I only recently completed the Final Fantasy XIII series, so I have a stronger appreciation for those characters at the moment than I do for any other Final Fantasy character. So seeing Snow and Lightning for the first time was just so much fun and exciting. And, of course, I love having them set as my Champions for calling them into battle. This right here is another excellent part of the game’s lovely charm and makes me appreciate it even more. 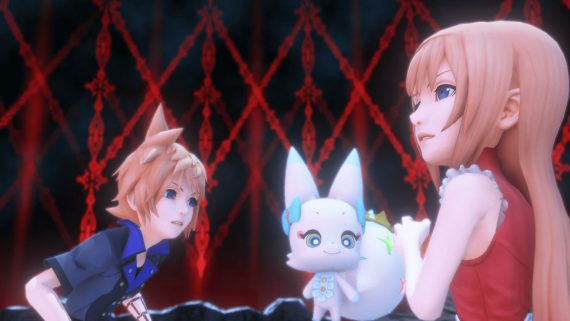 While it seems like I’m breezing through the main quest, there are still side quests to partake in as well that are done in an interesting way. Players are able to select from a list of encounters back in Lann and Reynn’s home town and then fight a battle for a friendly companion without them actually knowing it. It sounds strange, but it’s actually neatly done.

Also, for those who like to run around and come back to past locations, there are staged “boss” battles scattered in the world that are too strong for the player to fight at the first moment of discovery. However, as players get stronger, they can return to those areas later on and fight them. 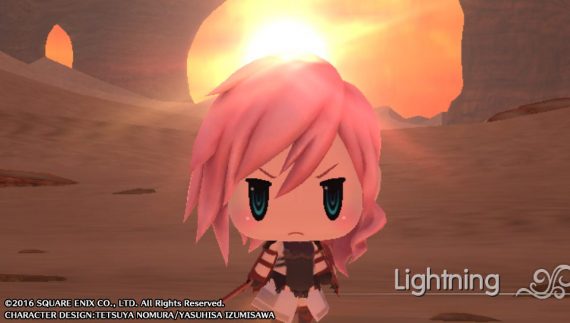 There’s so much more I could talk about, but the point is that I love World of Final Fantasy and can’t wait to complete it during the Holiday break. It’s stacks full of fun, entertainment, and charm that I believe all Final Fantasy fans can enjoy.

World of Final Fantasy: A Stack Full of Charm