Son of a… okay, okay, first thing’s first. Lara Croft Go is a good game at its core. A great game, in fact. I beat it in its entirety when it first came out on mobile devices, and I was happy to see how it might do on a bigger (I mean physically larger) system. Now I’m just annoyed.

Lara Croft Go is, in a nutshell, a remarkably brilliant distillation of Tomb Raider-ing into a bite-sized and turn-based puzzler. Everything about it stands head and shoulders above Square Enix’s other “Go” games (even the ones that came after). The visuals are fantastically stylized, with little in the way of small details but lots of attention given to the animations of Lara and the various things that want her to not be alive anymore. The puzzles themselves are devious and clever, requiring a mixture of chess-like preplanning and a bit of trial-and-error. There are collectibles hidden all over the place, which unlock new outfits for Lara so they actually serve some sort of a point other than, well, points.

Many of the areas Lara explores are also quite varied. Each “chapter” is filled with several levels, many of which have several smaller parts to them. Each of them also has their own overarching theme and throws in things like new enemy types or puzzle mechanics, so as to keep things from getting stale. I really, REALLY like Lara Croft Go.

Which is why this Vita port bothers me so much. Playing on a bigger screen is nice, don’t get me wrong, and I do like how all the bonus adventures and special costumes (which had to be bought separately in the mobile version) are unlocked from the start. However, technically speaking it feels more like a downgrade overall. 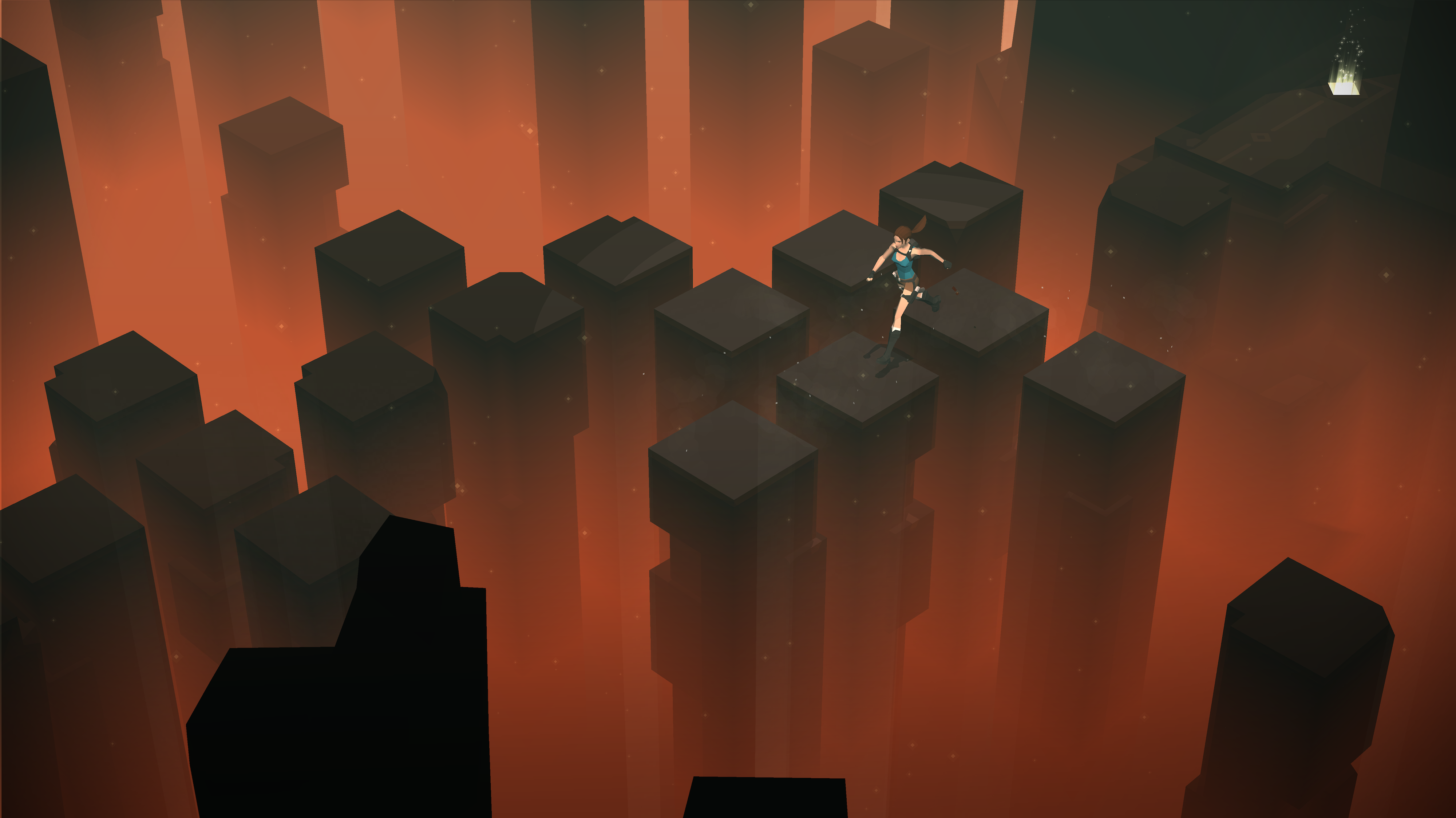 Sure the graphics are still nice and don’t suffer from being on a larger screen at all, but everything else just isn’t up to snuff. For starters, you can play using the Vita’s physical controls but there’s no real reason to. You can’t move the analog stick and hold to have Lara keep moving in one direction – she still has to hop around one step at a time, no matter what. You can’t pick up hidden collectibles with anything other than a screen tap. Really it just seems pointless (because it is). Granted it’s a handheld system with physical buttons, so of course they included support for them, but they’re so arbitrary.

Then there’s all the obnoxious pop-ups for wifi connections that you have to wade through every time you start the game up whenever the Vita isn’t connected to wifi. They can be bypassed relatively quickly, but they’re still a nuisance and having to see them EVERY TIME is ridiculous. I don’t care about leaderboards, I just want to play the freaking game! 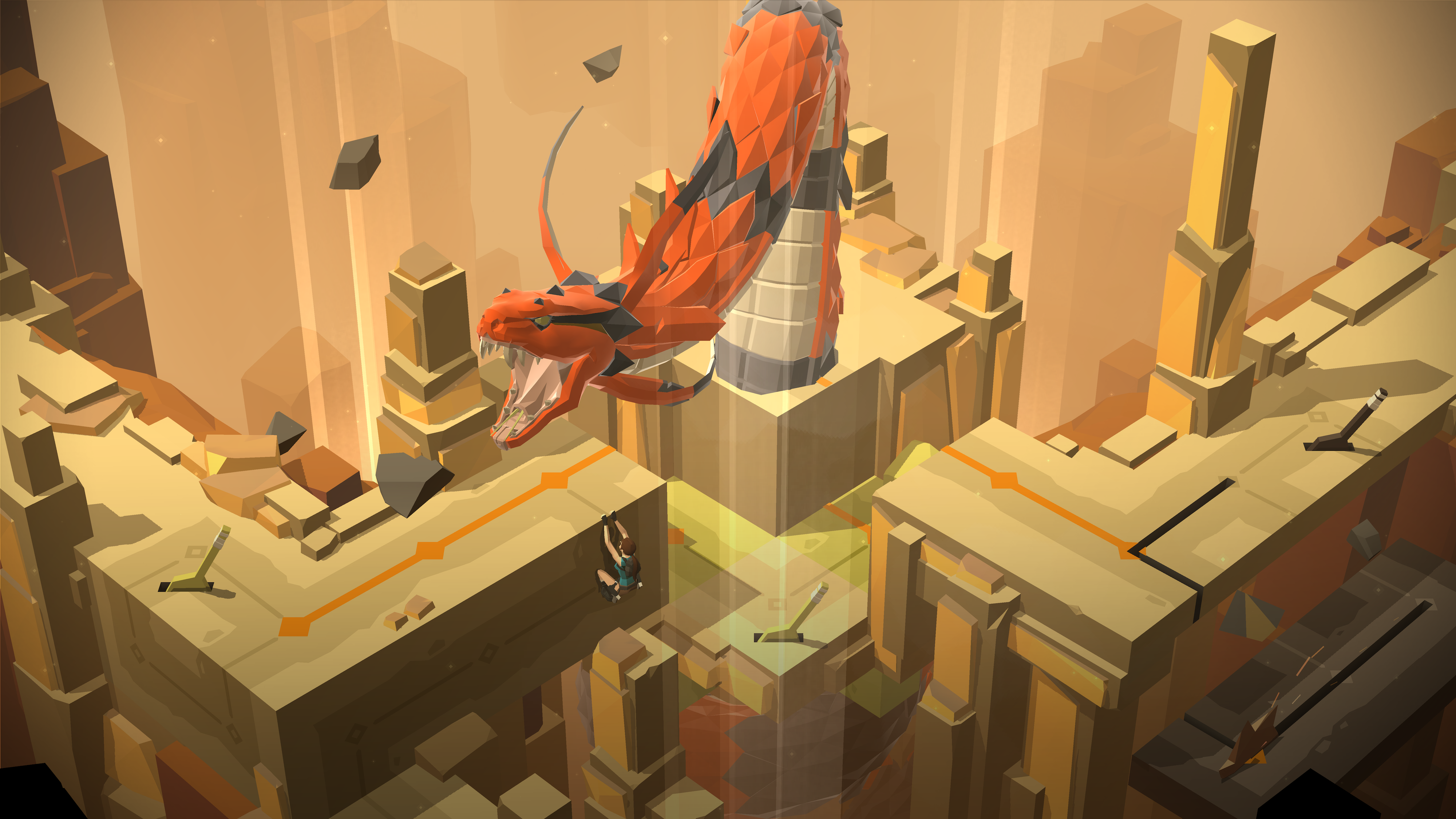 Speaking of just wanting to play the game, good luck with that. I’m not sure if it’s because of the coding needed to bring a mobile game to the Vita or what, but the load times are super irritating. They’re noticeably longer on the Vita than they were on mobile, and you have to sit through them constantly. If you want to back out to the level select screen so you can see how many collectibles there are in a given level (because showing players this information in the level itself is too difficult, apparently), you have to wait. If you decide you want to change Lara’s outfit, you have to back out several menus and wait, then wait again as you go back into the level you want to play. If Lara gets killed, you have to wait while the level reloads. It’s the sort of little problem that keeps stacking up until it becomes a very, very big problem. Again, I’m not sure if this is a problem with the Vita or the game itself, but either way I hate it.

Lara Croft Go is a fantastic puzzler that you absolutely should try if you’re able. Hopefully on an iOS or Android device, because this port does the game a pretty big disservice by bogging everything down. There’s so much greatness here that I think it’s worth putting up with the nonsensical load times if the Vita is your only option, but I hope it isn’t your only option because it’s a much more satisfying time when you don’t have time to make a sandwich while you wait to continue after a misstep.