Home » Gaming » The Last Guardian Review – Ico of the Colossus

Going in, I knew it would be impossible for The Last Guardian to meet expectations. This is a game that’s meant to stand with fan favorites Ico and Shadow of the Colossus, which is no small task even for a project that hasn’t been in development (hell) for close to a decade. I knew it would be asking too much for it to be what I wanted it to be – a heartfelt story about a boy and his giant catdogbird-thing that mixed the room-by-room puzzle solving and fascinating architecture of Ico with the scale and environmental puzzle solving of Shadow of the Colossus. I knew I shouldn’t expect any of that, but I still quietly hoped.

What I found after I’m not sure how many hours (I’d guess anywhere between 8 and 15?) of play, and waiting to catch the last little bit of cutscene once the credits finished rolling, was that I wasn’t disappointed in the slightest. In fact, I was genuinely surprised at how so many of my expectations – expectations I’ve already admitted were unrealistic, mind you – had been met. It’s nowhere near perfect, of course, but it’s pretty much exactly what I’d hoped for. 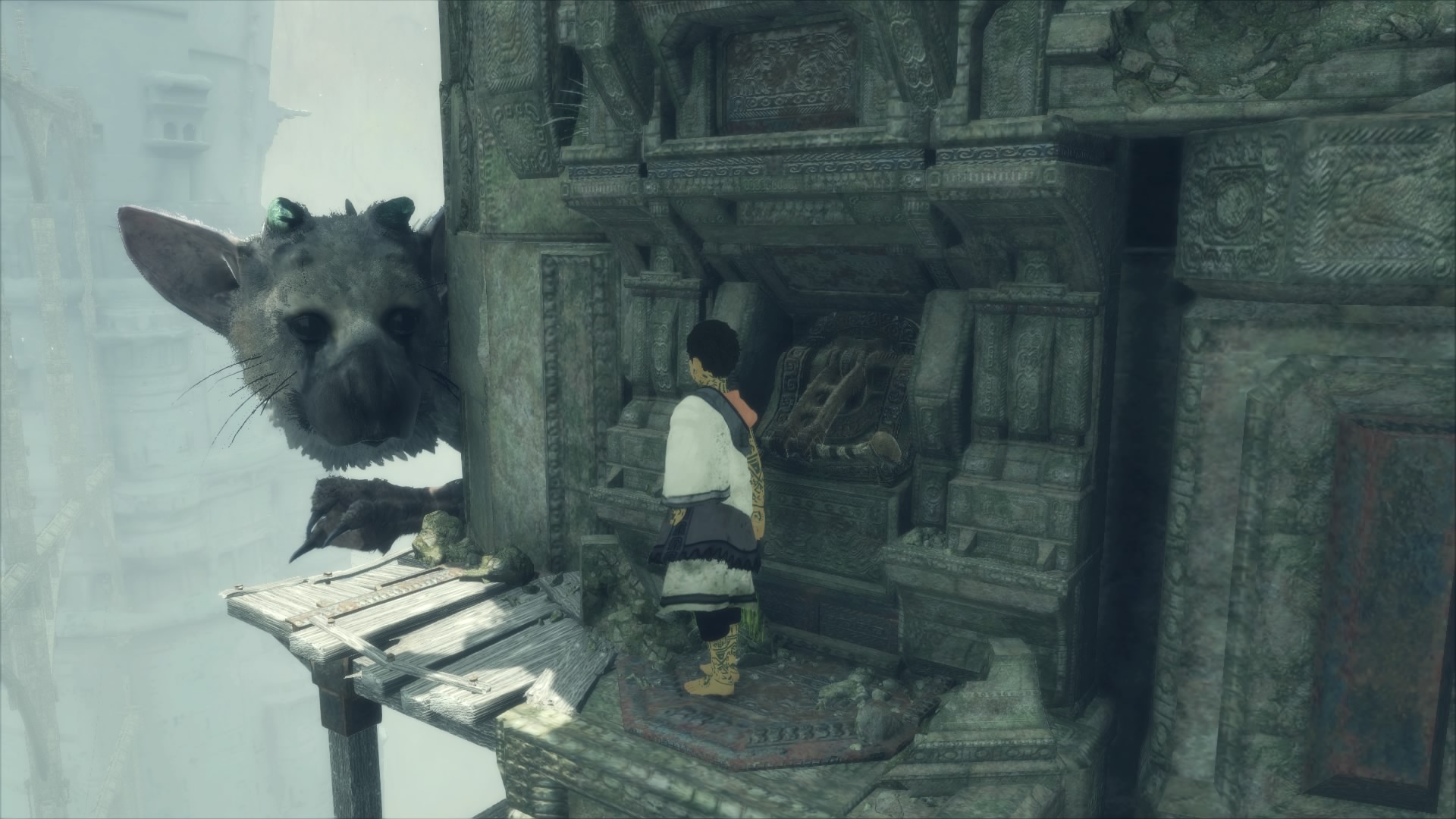 A young boy wakes up in a dank cave, covered in strange markings and with no recollection of how he got there. Then he realizes he’s got a cellmate of a sort – a large man-eating cat/bird/dog/gryphon-like creature, which is naturally feared by his people. Trico is injured and The Boy is trapped, so it doesn’t take long for the two of them to start working together to find a way out. I won’t spoil the rest of the story, but suffice it to say it’s all focused heavily on the growing relationship and trust between The Boy and Trico.

The Last Guardian was heavily influenced by the two not quite interconnected titles that came before it, and besides the visual style (which I’ll get into later), this is most apparent in the way the main character controls. In short, he’s kind of a mess. Both of the protagonists from earlier in the “series” were fairly awkward – Ico stumbled around a lot and was sluggish, while Wander seemed to be incapable of steadying himself while climbing for more than a second at a time. It’s even worse here. The Boy trips, stumbles, and gets hung up on EVERYTHING. I’m pretty sure there are toddlers who could walk through debris fields faster and steadier than he can. 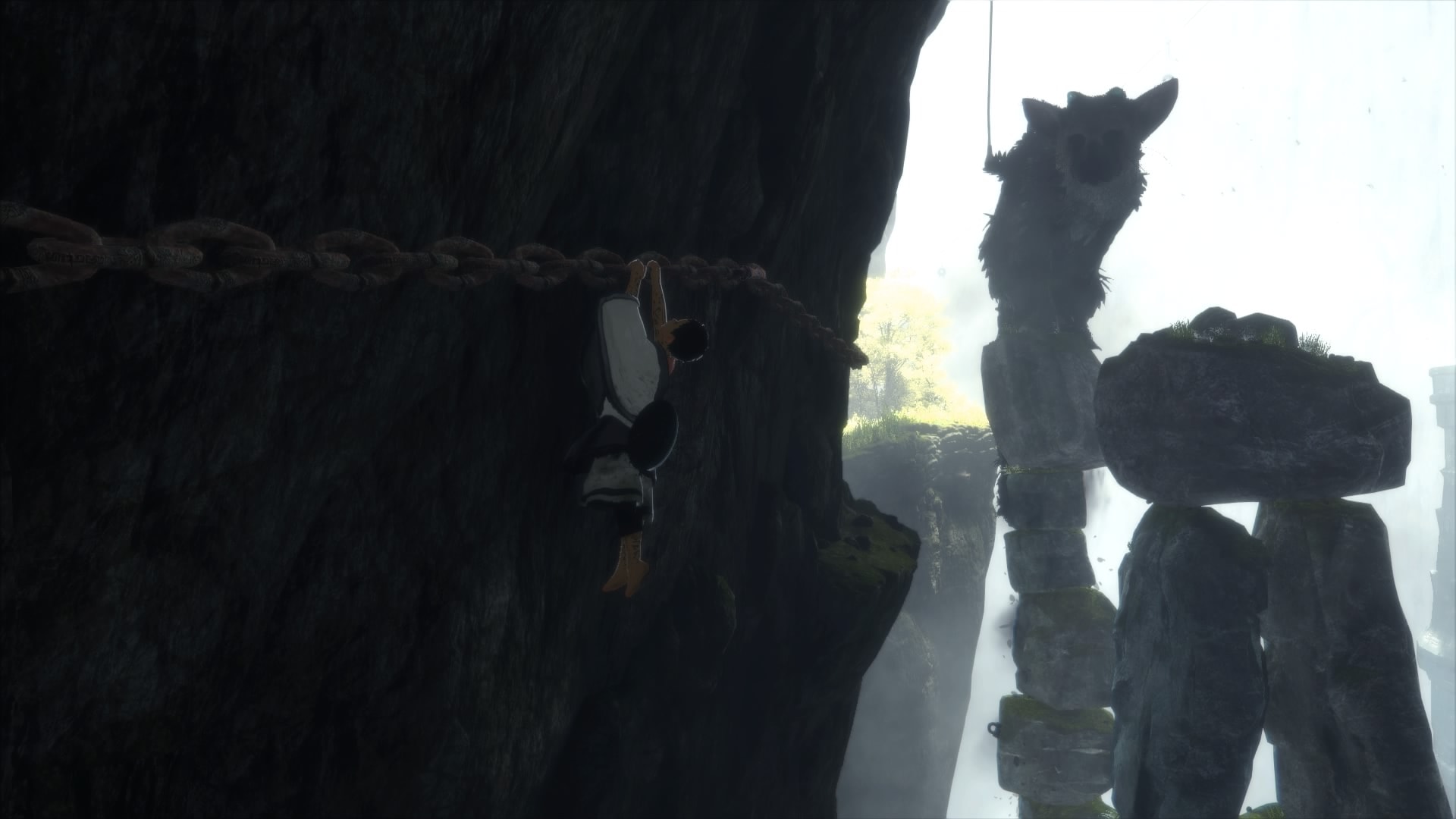 Looking at some of the chatter that’s been circulating about The Last Guardian, I’ve seen complaints that Trico is also uncooperative. I didn’t have many issues with him, myself. There were only ever a few moments throughout the whole game where I felt like I was having trouble getting him to do what I’d intended. Most of the time he performed admirably – especially once I was able to give him more specific commands. Heck, most often than not, Trico was the reason I didn’t spend a bunch of time wondering where to go or what to do next. No, Trico isn’t the problem. The Boy is the problem.

Automatic grabbing is inconsistent at the best of times. The Boy’s ability (need, really) to shove enemies around in order to knock weapons out of their hands is comically imprecise. Using the circle button for everything tends to result in the action your DIDN’T want to perform being the one that’s performed. And again, this kid trips and staggers over EVERYTHING. Then there are those stupid control tips that won’t stop popping up. I’ve been playing for several hours and they STILL end up ruining the perfectly HUD-less screen because maybe I forgot how to jump this time? No, game, I didn’t forget how to jump. Stop disrupting the beautiful scenery with your insipid tooltips that SERVE NO PURPOSE ANYMORE. There’s no option to turn them off, either, so you just have to get used to their hideous presence. 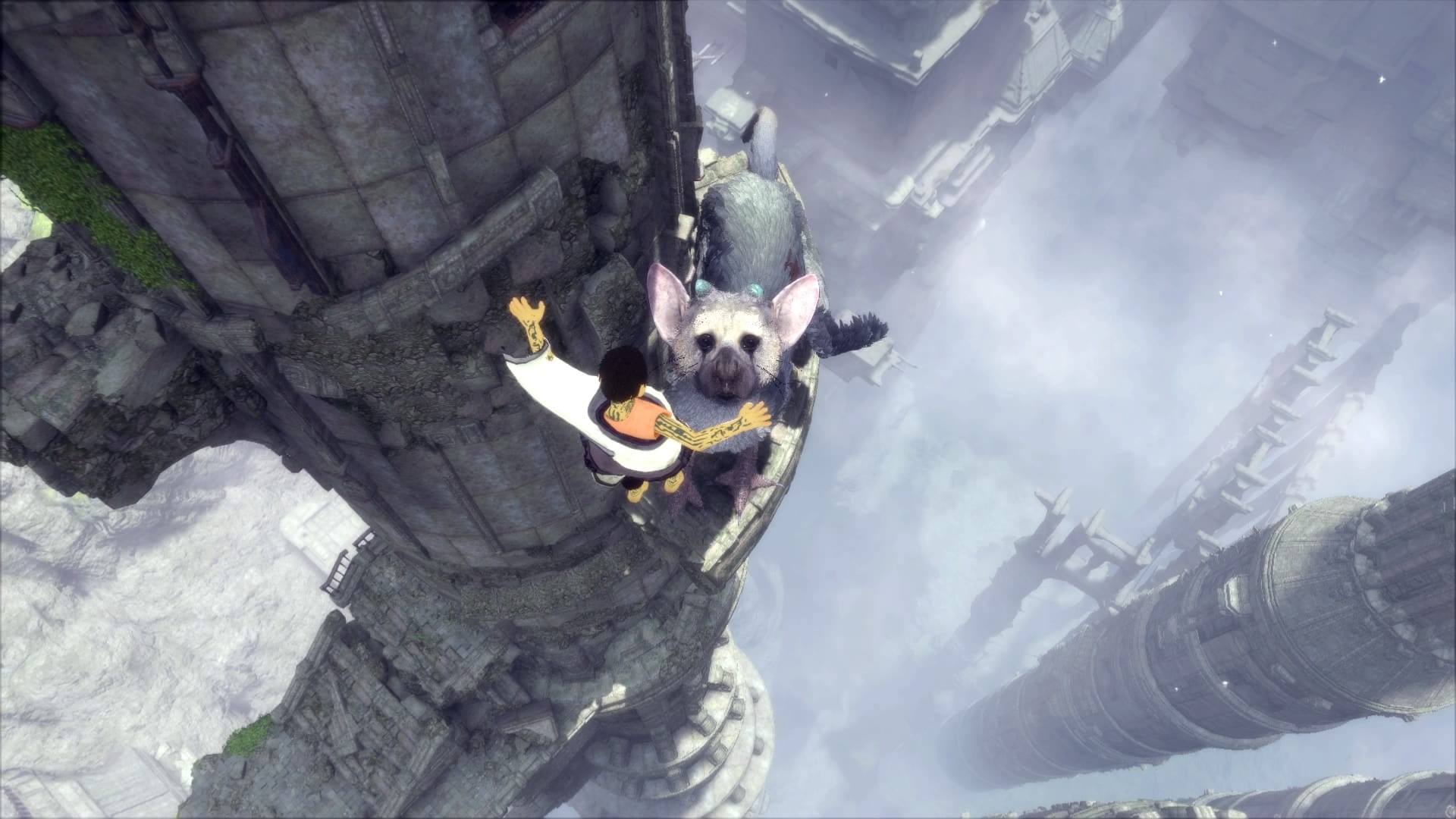 Yet, for as frustrating as it’s been to have to repeat certain setpiece moments because The Boy wouldn’t jump quite right (thus severely reducing the impact of those setpiece moments); as infuriated as I’ve gotten when desperately trying to help Trico deal with animated suits of armor and only managing to get myself captured; as annoying as it is to try and leap onto Trico only to have The Boy decide that, no, he’s not going to grab onto his feathers this time for no discernible reason; despite all of that, I’m absolutely in love with The Last Guardian.

The visuals are utterly striking, with lighting effects that aren’t just technically impressive but are also put to great use in order to enhance the mood. The architecture is incredible both because of its small details and because of its seemingly almost impossible layout. The physics, when they aren’t focused on The Boy, create memorable moments of beautiful destruction. The pacing always keeps you moving without the need to backtrack but allows you to drink in the quiet moments as well. The way the story unfolds kept my interest the whole way through. And then, of course, there’s Trico.

Anyone who’s played Shadow of the Colossus will remember Agro. She was Wander’s sole companion throughout the entire game – his faithful steed, sure, but also his only friend. Well, Trico is kind of like that but dialed up to 12. Yes, higher than 11. It’s obvious that a lot of care went into his expressions – via his face, ears, and body language. His various “tells” do serve a gameplay function much of the time, such as the way he’ll sort of bark an understanding when about to perform a command, but they also give him a distinct personality. Trico is the emotional center of the entire game, and he WILL tug at your heartstrings.

Trico isn’t an emotional crutch, however. It would have been so easy to follow all manner of cliches to try and force a reaction out of players. Instead, we’re allowed to form our own attachment to him along with The Boy. Every little moment where Trico is being cute or helpful or scared or whatever builds upon that relationship, to the point where I even found myself yelling at the screen during the more climactic moments. I never gave a crap about The Boy the whole way through, but whenever Trico was in any kind of danger I felt genuinely anxious and desperate. 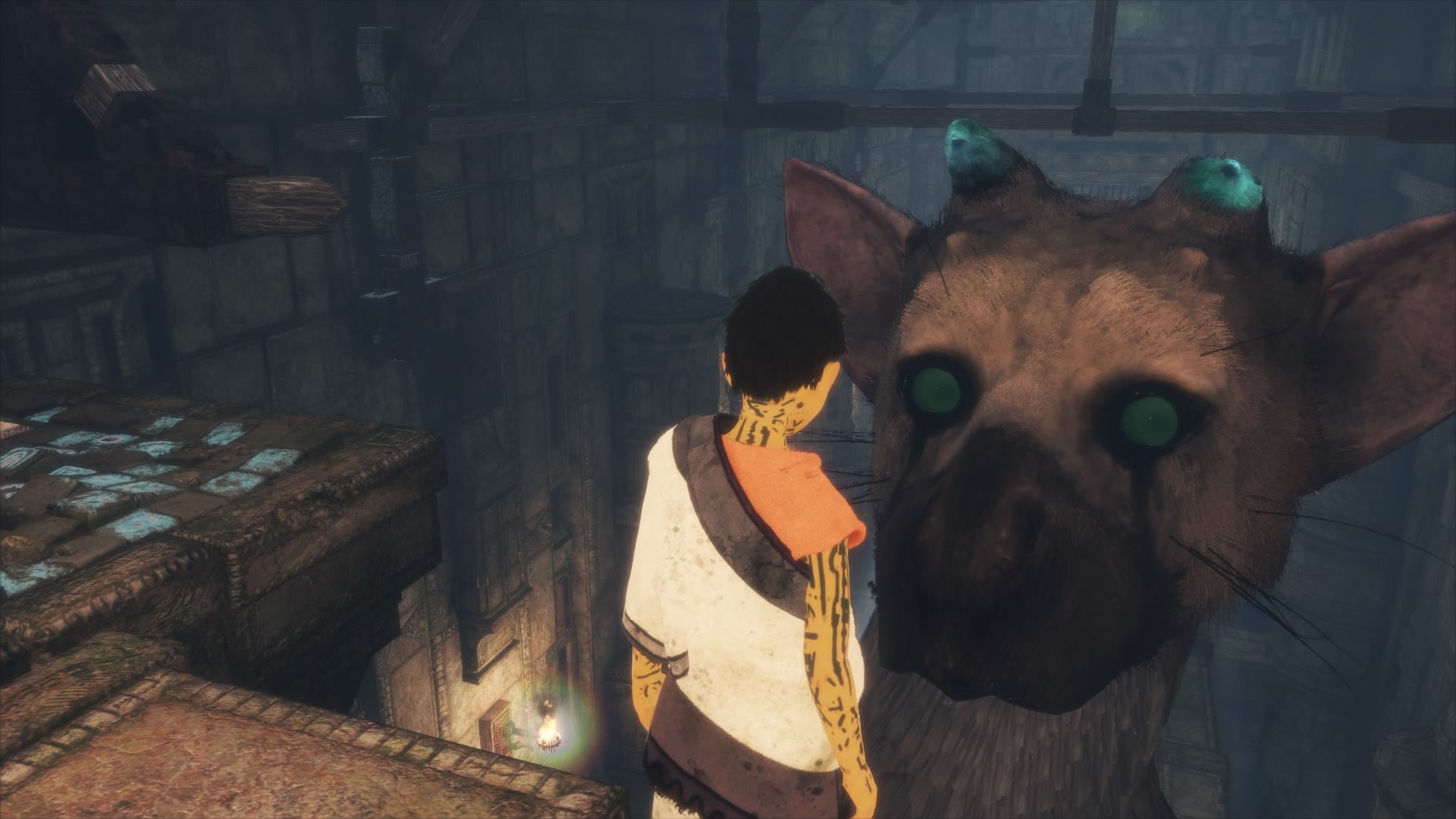 The Last Guardian is a gorgeous, awkward, emotional, frustrating, magical mess of a game that was pretty much exactly what I’d wanted – a hybrid of Ico and Shadow of the Colossus with updated visuals. If the previous games didn’t do anything for you, I doubt this one will change your mind. However, if you’re a fan of either (or both), then you should definitely check it out. I went in cautiously hopeful, and came out feeling like I needed a hug and a day-long nap. And I can’t wait to go through it all again.

The Last Guardian Review - Ico of the Colossus