by Emma Loggins
in Entertainment 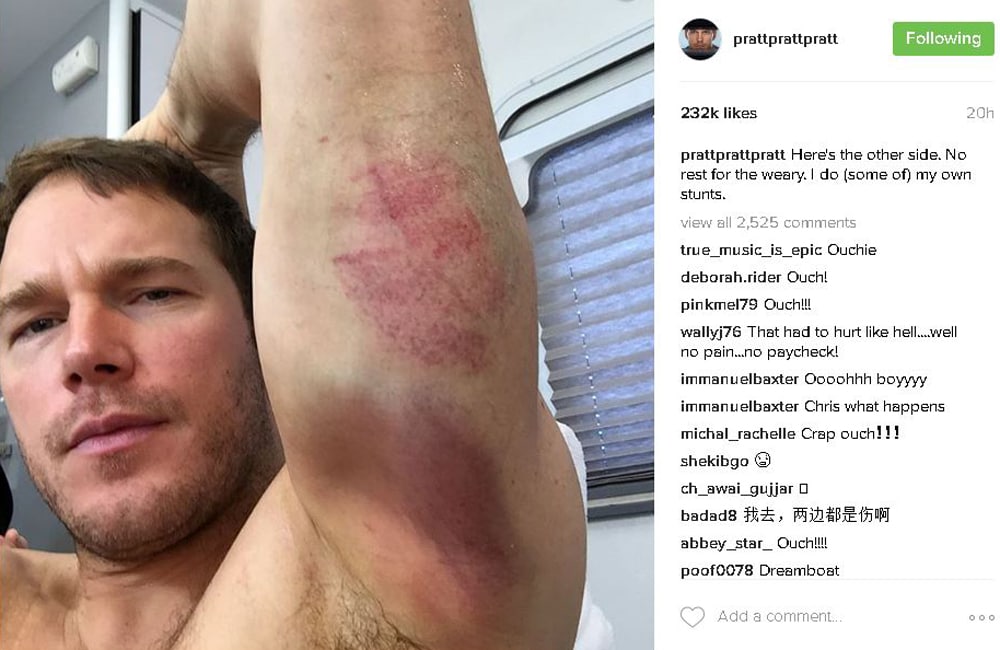 Chris Pratt has revealed the bruises he suffered during the making of Georgia-filmed Passengers.

The 37-year-old actor -- who plays the lead role in the highly anticipated new sci-fi film alongside co-star Jennifer Lawrence -- posted two pictures of his bruised arms to his followers and quizzed them about which stunt from the film caused the injuries.

Chris captioned one of the images: “See #Passengers on Dec. 21st and see if you can spot the stunt that caused these bruises!

See #Passengers on Dec. 21st and see if you can spot the stunt that caused these bruises!

Here's the other side. No rest for the weary. I do (some of) my own stunts.

The movie sees Chris and Jennifer wake up 90 years too soon from an induced hibernation on a spaceship and they later fall in love.

During the making of the movie, the Hollywood duo developed a tight bond and Chris previously admitted they landed themselves in trouble for their mischievous on-set behavior.

He said: “Every once in a while we had to be shushed. We had a lot of fun. We were laughing a lot. She’s [Jennifer] better at switching immediately from goofball mode into serious acting mode, so sometimes I had to kind of shut it down and kind of go inward to get there. She just kind of turns it on and off real quick. So yeah, we got in a little trouble -- but not too much.

Chris insisted, though, that he wasn’t annoyed by the other cast members because their humor brought balance and “lightness” to the production.