Horizon: Zero Dawn is the sort of game that I knew I had to play the moment I saw it. That initial E3 reveal was scripted, I’m sure, but the look and concept were all I needed to be like “Oh yes. Oh yes this will do nicely.” I mean it’s a game about hunting giant robot animals with a bow and arrow (among other things) – that sentence alone is enough to make my eyebrows involuntarily spasm.

So naturally I picked up Horizon: Zero Dawn on launch day. Unfortunately since I only just started playing, and have less guilt-free gaming time than I’d prefer, it’ll likely be a little while before I can finish it. So since I can’t really review it just yet I figured, why not talk about the things that I love about it so far? Hence this list was born! 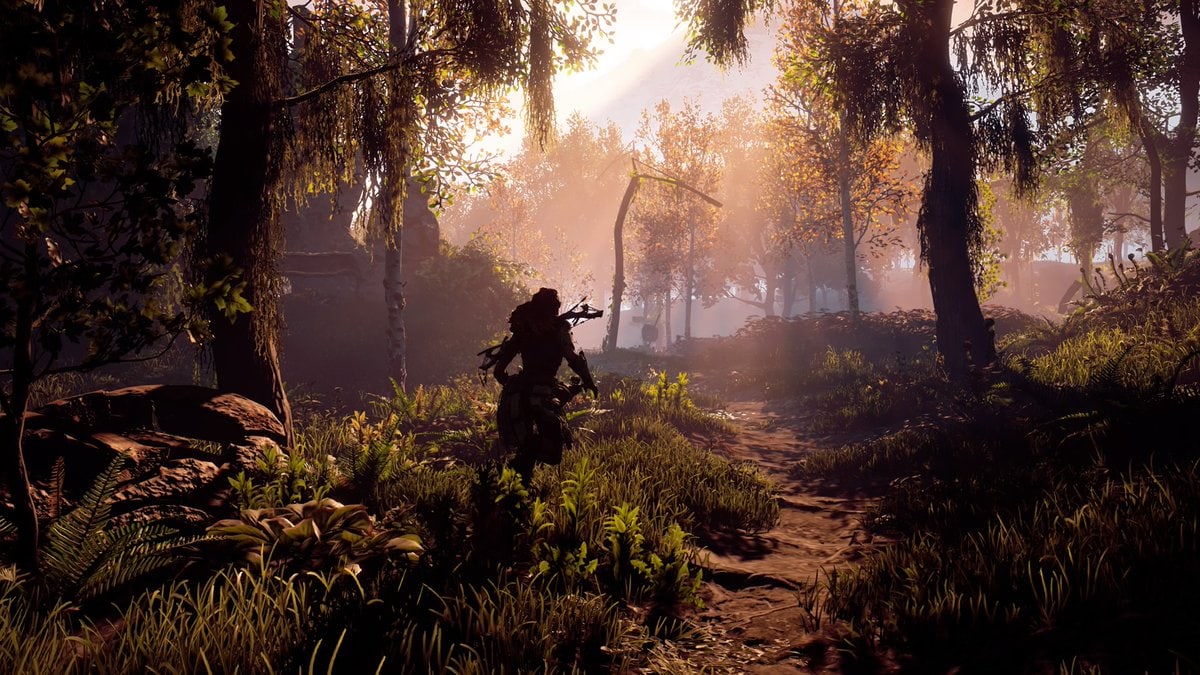 I am in love with Horizon: Zero Dawn’s visuals. On a technical level they’re very impressive, but on a stylistic level they have me drooling. The environments are quite diverse, with the early area’s warm browns and yellows eventually segueing to cooler blues and greens – and I’m sure even more visual variety is to come. The outfits are an impressive and clever combination of Stone Age pelt shirts and what looks like it could be bone armor/decorations but are actually machine parts.

Then there are the machines themselves, oh my goodness are their designs incredible! Every one is simultaneously recognizable and completely alien looking, with more than a few really clever functions that sort of parody specific animal features but with machine parts in a way that makes me go “That’s weird but it also makes sense.” Mammalian carnivore analogs like Scrappers and Sawtooths (Sawteeth?) have sharp rock/meat grinder looking bits where their mouths should be; the deer-like Grazers have rotor tillers for antlers and actually use them to churn up soil when you aren’t trying to murder them (or they you). A lot of fantastic concepts went into these machines, and every single new one I find fascinates me in a different way.

On top of all that, there’s also a photo mode! I love it when games – especially games that have a great style like this – let me pause the action and play around with framing and taking my own fancy screen shots. And since the world, designs, and lighting is all so fantastic it’s really easy to take some truly impressive snapshots. 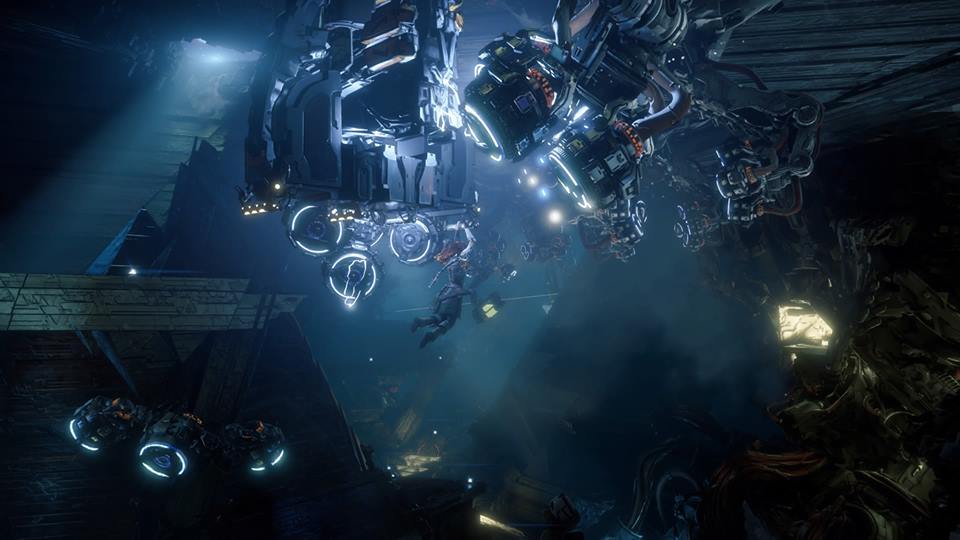 What I mean by that contradictory headline is that most open world games have a certain not so great quality to them. Their worlds are big but ultimately feel empty, or false – like the areas in between important locations are just a void where they decided to toss some meaningless fluff rather than simply shrink the map down a bit. In other words, the explorable areas are big but mostly feel empty, even when there are other characters and vehicles and whatnot wandering around.

Horizon: Zero Dawn, on the other hand, sports a fairly large world that feels more intimate than that.There are certainly areas of wilderness where random machines wander and various resources sit around waiting to be gathered, but none of it feels like an afterthought. I can wander off in any direction and know I’ll come across something worth my time – whether it’s crafting materials, machines to hunt, side quests to take on, or even something as simple as a pretty vista. None of the world feels wasted.

It’s possible after the first couple of hours (depending on how fast you progress the story) to acquire the ability to “hack” certain machines and use them as mounts. It’s a neat and satisfying way to move around the environment faster, but I find myself using it a lot less than I’d expected to. Not because it’s bad in any way, but because the areas I wander through are so robust I constantly get sidetracked. 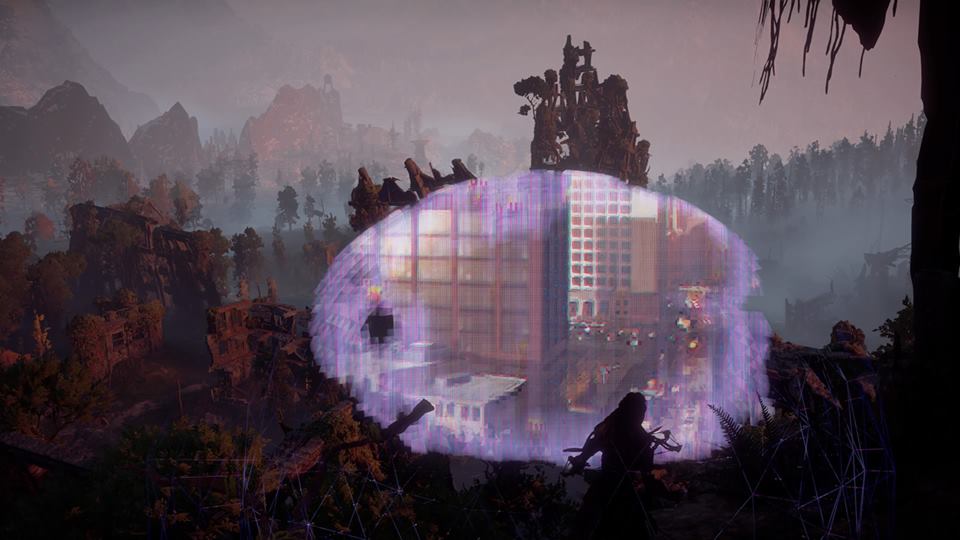 3) Side Stuff is Worthwhile

So many games (SO MANY) use side missions and challenges as a half-hearted attempt to pad out the playtime/gameplay. While Horizon: Zero Dawn’s collectibles could absolutely be seen as such, there’s a certain quality to the way they work and are presented that has me actively seeking them out rather than avoiding them. It’s not even a completionist thing either, I’ve genuinely been having a good time with these tasks.

Side quests are bookended with unique characters and usually involve some sort of self-contained story that plays zero part in the main plot but help to further flesh out the world. Seriously, I’ve yet to find a side quest given by a generic NPC. So far they’ve all been named characters with unique faces (though with some similar hairstyles). There are also useful quest rewards like important crafting components, experience points, and even the occasional skill point.

The collectibles are a bit more run of the mill as it’s just a matter of “go here and pick up the thing,” but because of the way the open world has been constructed (as mentioned above) even these superfluous fetch quests can be satisfying. More often than not I end up having to think and fight my way through or around some hostile machines or human bandits on my way to the right spot, which yields its own rewards. Many of these collectibles also serve a purpose outside of simply being a special thing you can find, with some being used for trade in the game’s larger villages. None of it feels tedious. 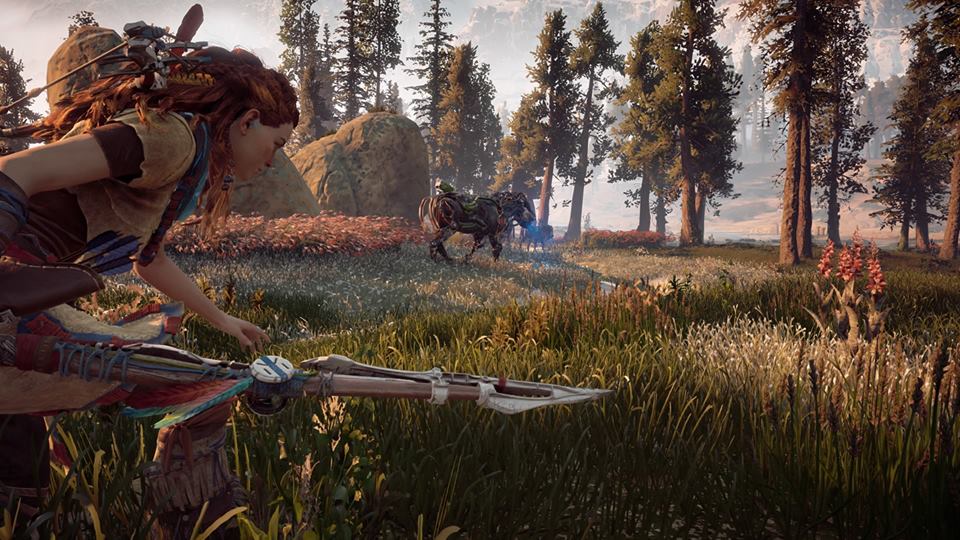 4) Hunting and Combat are Fun

I mean, duh, right? The thing is, there have been a lot of open world games that ended up sacrificing a bit too much in favor of creating a big map (that usually ends up being boring, anyway). Not so here.

Fighting the machines feels good. It’s easy and fast to switch between ranged and melee attacks, changing primary weapons on the fly is a breeze, and even crafting ammo while on the run is snappy. Each type of machine presents a different challenge as well. Some do share a few basic attacks, such as the herd machines tendencies to charge at you but even then the different types have different physical construction, which means you have to target different body parts or use different attack types in order to maximize damage. And maximize you should, because even the smallest machine can tear you to shreds if you don’t know what you’re doing.

Then there’s actually hunting – not simply fighting, but HUNTING – machines, which is a treat unto itself. As I’ve said, every single type of machine has specific weak spots (and sometimes elemental weaknesses). It also won’t take long for you to build up a small arsenal of unique weapons and traps that you can use to give yourself even more of an edge: like the Tripcaster, for example, which can be used to set up electric tripwires that will stun any machine that sets it off for a few precious seconds. You can also craft and set various kinds of traps that will explode, shock, freeze, and so on. Coming across a herd or a large machine and figuring out how best to use what you have on hand along with the terrain in order to quickly take them down – and then actually doing it, of course – is an amazing feeling. I’d go as far as to say it’s almost as satisfying as finishing a hunt in Monster Hunter. 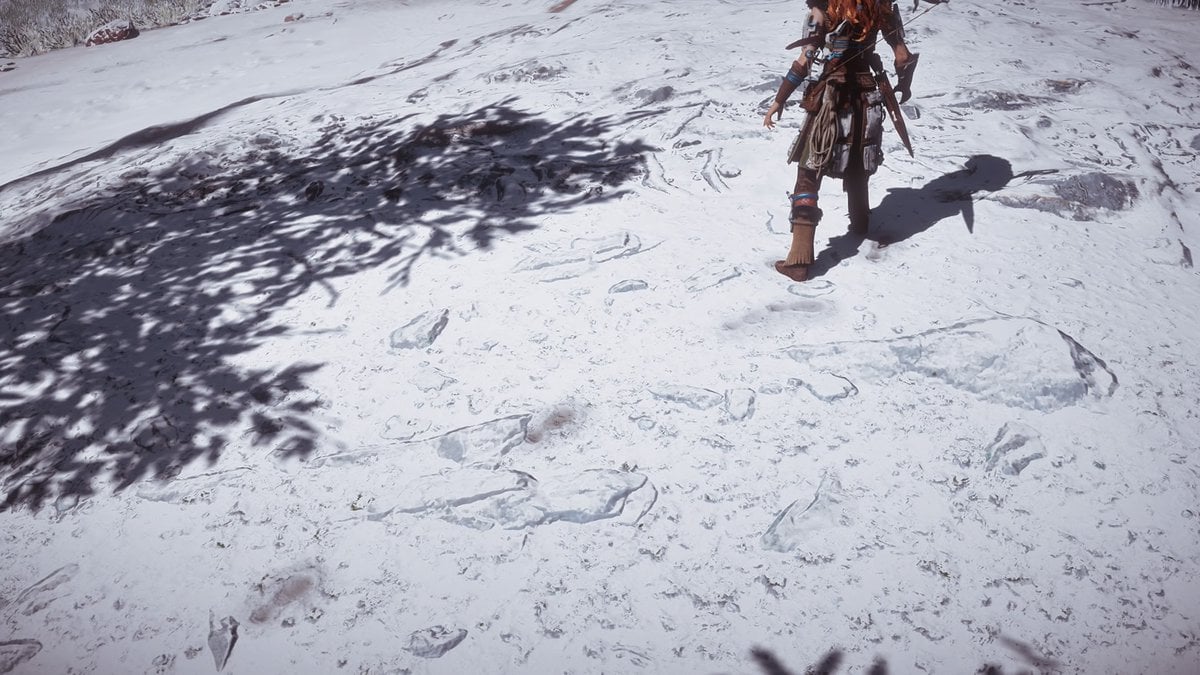 5) All the Little Details

I’m a sucker for little details in games, and Horizon: Zero Dawn has them in droves. The previously mentioned idle animations of Grazers is one example, but really all of the machine animations are fantastic in their own way. Then there’s the Watcher carcasses that randomly litter the world. They don’t yield much in the way of components but they do provide metal shards (needed to craft arrows), which I’m pretty sure is intentionally done as a way to give players a means to craft arrows even when they run out of shards. The same goes for the plants you need to collect for healing purposes – they tend to litter the roads, which are usually the safest areas to travel – which leads me to believe it’s also meant as a means for players to restock on healing goods after a tough battle with a minimal chance for further hostilities.

Then there’s the way the world itself is presented. Horizon: Zero Dawn provides a lot of context – not just story, but also cultural and sociological – via clothing designs, architecture (both ancient and “modern”), and dialog. I don’t mean that awkward expositional dumb dialog that’s so common in every type of media; I mean you can start to get a feel for the world and piece some of it together through the offhand comments and references that characters make, WITHOUT blatant exposition. It’s not quite on par with A Clockwork Orange’s approach to dropping you in a setting and letting you figure it all out, but I greatly appreciate the slightly more subtle approach.

Finally, the artifacts. I love how this game handles the ancient artifacts. It’s basically The Little Mermaid but post-apocalyptic. As you explore ruins you find things like keys and watches and coffee mugs, but the names of these items and the way they’re described is all from the perspective of a society that has long (LONG) since forgotten what their ancestors were like. I think my favorite bit so far was how keys were called ancient chimes or something like that. This misinterpretation of today’s common items is funny, certainly, but it also makes a lot of sense when you stop and think about it from the viewpoint of a person living hundreds – maybe even thousands – of years in the future with no historical data to fall back on.

Horizon: Zero Dawn - 5 Things That Are Immediately Great About the Game