During PAX East 2017 I had the opportunity to sit down and play Final Fantasy XV: Episode Gladiolus for about 30 minutes of time. This is the first character-driven episode of DLC for Final Fantasy XV as it follows Gladiolus on his journey of seeking self enhancement. During the DLC players will come across brand-new gameplay, environments, enemies and more, leading to an exciting first release of DLC content.

I’m going to avoid speaking about any story-related situations to exclude spoilers from this preview and focus primarily on gameplay. Additionally, in the video below, I keep it focused on gameplay as much as possible while skipping through cinematics.

Gladiolus wields a heavy sword that he can attack and block with, and he can also charge up a meter that represents different types of special attacks for dicing through multiple enemies at a time. Seriously! What a joy it is to hack and slash away at enemies with Gladiolus. It feels powerful and exciting with every press of the button. The gameplay really becomes so incredibly fun. 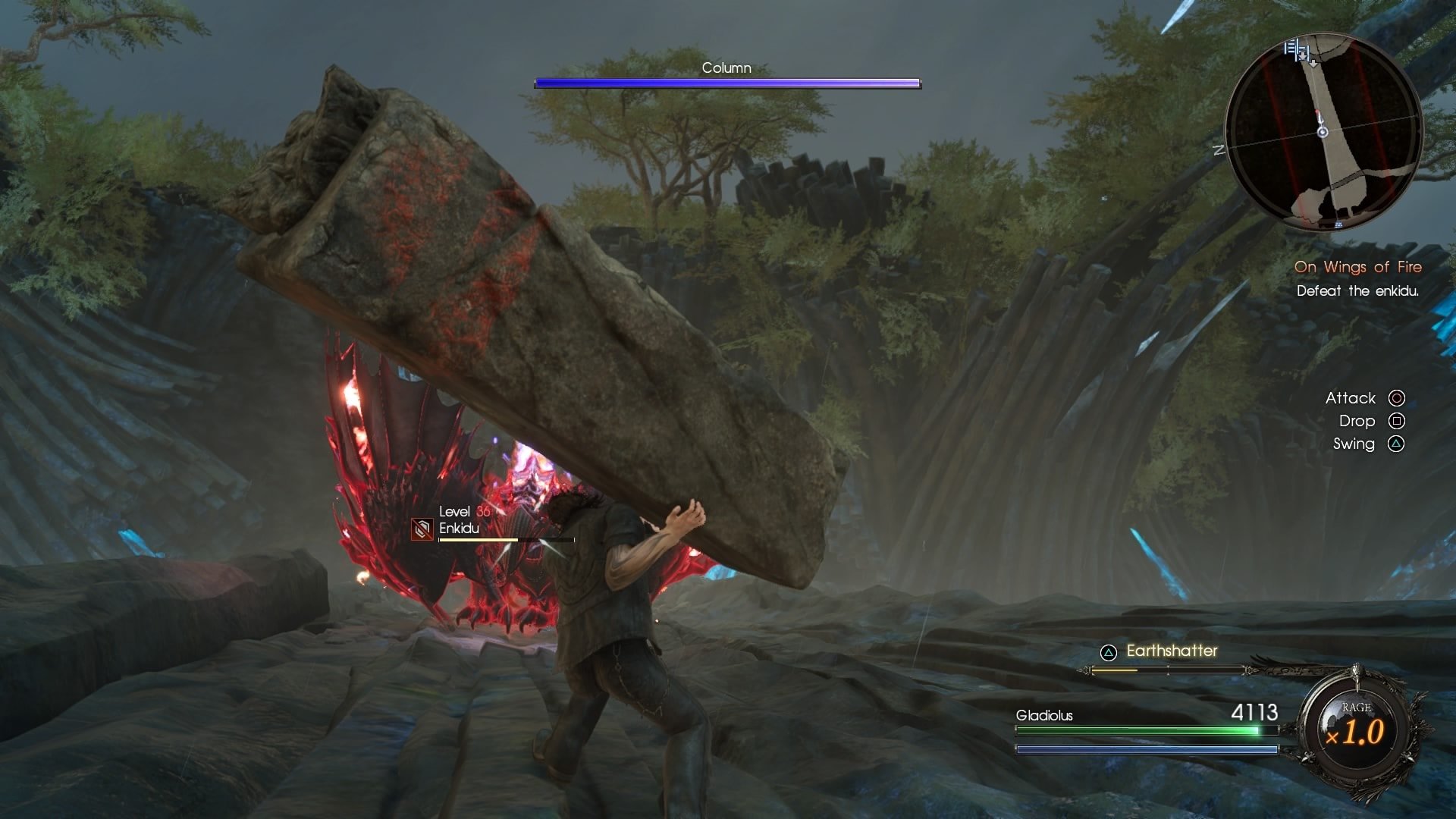 There’s also an element where Gladiolus can pick up pillars for swinging and bashing against enemies that have a higher resistance against his sword attacks. The stone pillars make a bigger impact, causing more damage than the sword, and can be found at random points along the path where these defensively stronger enemies frequent.

To compliment the story and gameplay, the atmosphere comes off as a perfect fit for what’s going on in the DLC. The surroundings are absolutely gorgeous and continue to meet the standard expected from Final Fantasy games. The dungeons that Gladiolus explores are dark and contain long since dead soldiers who lie and hang defeated. There are also massive canyons full of blue crystals glowing bright from both sides. Both sections make the scenery intimidating and picturesque.

And from what I saw of the enemy threat during my 30-minute demo, I really appreciated the awesome and fearsome look of the adversary. This is especially so when those dead soldiers suddenly come to life and turn into wandering souls for Gladiolus to defeat. Most enemies and bosses are really exciting to stumble across and engage with in battle. These enemies also fit great with the story and atmosphere that surrounds the player.

I honestly didn’t have much anticipation going in to my demo with Final Fantasy XV: Episode Gladiolus. However, I’m now beyond impressed and overjoyed with excitement for its release on March 28th. My 30 minutes flew on by to the point where I just didn’t want to stop, and now I can’t wait to jump back in and complete Gladiolus’ journey. I look forward to discovering more of the story and location while engaging in additional hack and slash style of gameplay.

I also want to note that Final Fantasy XV: Episode Gladiolus comes with a score attack section that allows players to compare their high scores with each one of their runs. As fans play through the DLC and engage in battle they’ll be able to increase a multiplier that helps them earn a better score. Currently the leaderboard is local only, but I was told that they are considering the possibility of adding an online feature to it so players can compare their scores against friends. If that happens I’ll have yet another new addiction on my hands.

I’m excited to experience the rest of Final Fantasy XV: Episode Gladiolus when it releases in about two weeks on March 28th, 2017 for PlayStation 4 and Xbox One. Based on my 30 minutes of play it sure looks like it’ll provide a very entertaining and worthwhile playthrough.

Check back soon for our PAX East 2017 coverage of Final Fantasy XII: The Zodiac Age.