Midnight, Texas, NBC’s newest series, premieres on July 24 at 10/9c! And since the premiere is so close, the embargo has been lifted from my set visit earlier this year! I was able to sit down with Peter Mensah, who plays Lemuel Bridger on the new series, to talk about his character, what drew him to the series, and what he can tease for the first season!

Not familiar with Midnight, Texas? Take a look at the trailer below.

Was your character around at the time of the Romans? How old is he?

Peter Mensah: I think the timeline is 200 years old. So, you know, he’s a growing vampire, he has a little ways to go yet. He’s a youngin’, and actually there is an episode coming up which tells of his background and I can’t wait for people to see it. They found a really unique way to develop Lem.

Did you know about that development of Lem coming into the series?

Was it something that surprised you when you read the script?

Peter Mensah: You know, coming into it, all I knew was that Charlaine [Harris] … it was a series of books from Charlaine, that Monica was going to show-run … Monica Owusu-Breen was going to show-run, and I thought the world of her, because a number of friends of mine had worked with her on “Agents of Shield” and “Under the Dome,” etc. and then Niels Arden Oplev was our director of the pilot… I had always wanted to work with him since I saw “Girl with the Dragon Tattoo”, the original version, so I thought “this could be good.” And, it really exceeded expectations, you know, it’s fun, I think it’s a fun ride. You guys have just seen the pilot, right?

Peter Mensah: It gets intense.

Is it pretty surprising for regular television?

Peter Mensah: It’s a lot. It’s a lot in a very approachable way. It’s quietly subversive in that it’s a group of outsiders that would not … you just don’t imagine them being together, and rejected by everyone else around them. So even the satellite towns around them reject them, everyone sort of drives their car around their city to avoid it. And our lead basically brings the audience into Midnight, and as he experiences each of us, so does the audience. And you find every person you meet is unique in some extraordinary way. But yet somehow, they formed a very close-knit society, and that is why I think Midnight has something very, very unique, because I think everyone can find a way of relating to being an outsider in some point in your life, and to find someone who accepts you makes the most extraordinary Were-tiger or angel seem very approachable. Then they battle forces that are not of this Earth, and then forces that are of this Earth, and it’s extraordinary.

Have you guys gotten any push-back from NBC in terms of things being too sexy or too controversial or anything like that, that you know of?

Peter Mensah: We have been insulated. I think Monica and David Solomon, they receive all the flak, and then they show up sweating profusely and just tell us to carry on.

Peter Mensah: You know interestingly, I think the time between the pilot and when we actually started is so typical, because when you’ve worked in the industry long enough you’ve shot pilots and you just know “don’t hold your breath.” Go do something else, stay loose, and if all these stars align, you’ll be back. And so, that’s sort of what happened.

But, uniquely, the actors all stayed in touch, and we went out for dinners and we’ll all go off and do different projects or whatever, but we get back to Los Angeles and meet up. And I thought “oh this could work.” And then when we came back, the excitement is more … I can’t wait for people to see it, and quite generally because we were surprised. Each episode you cannot anticipate what’s going to happen – Like some of the procedural way, you know: crime committed, investigation, oh no, oh no, oh yes. There’s always a wow factor to each episode, there’s something you didn’t see coming.

From the pilot, Lem seems to be the guy that everyone in Midnight listens to and follows and does what he says. Is he sort of the defacto-mayor?

Peter Mensah: Man, that would be great. Mayors get paid, don’t they? He’s the mayor that cannot be out during the day, he has an aversion to sunlight. I think there’s a wisdom to the character that I think the other Midnighters respect, he’s been around that town too for an incredibly long time. He’s not, however, the oldest person in town, which the audience will find. But I think that he does sort of present the father figure, and he’s the one that looks out for the youngin’s or the new ones, and he’s also willing to kill for the town. Which, not all the other Midnighters are into, because even though the fact that he doesn’t have to kill to survive allows him to be part of the community, it’s still something that’s bubbling under the surface. So, he remains somewhat dangerous. So, it could be respect, it could also be fear. 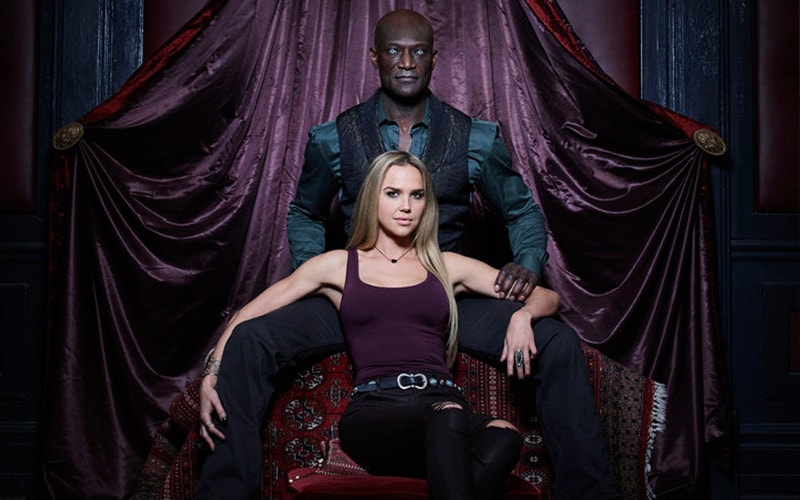 Would you say him and Olivia – are they sort of each other’s confidants?

Peter Mensah: Yes, there’s no questioning that … and that’s also part of it, by the way, that you get to see the relationships develop. Or, you see the history of the relationships, so both things are happening at the same time. So yes, there’s a comradery, but there’s also the issues of each person has the issues that pertain to their particular situation, whether you are the angel hiding, or you are the witch, or whatever, there’s a backstory. So, part of this is that you’re going to see that, and as a result see friendships, or not, or however the community works becomes part of the conversation.

Were you familiar with the books coming into this? Or did you read it when you got the role? Or are you just trying to keep them completely separate?

Peter Mensah: I actually read them after, I started reading them prior to the pilot and sort of completed them while we were working, because at that time I don’t think any of us really knew what direction we were going… we knew that it was fairly obvious they were going to be a little bit different, because obviously Lemuel Bridger in the story doesn’t look like this. He’s the thin white dude and I’m not. So already there was a little bit of going away, and so we used that and use other things to sort of draw an audience, that might already know these stories, into the characters being developed because maybe we explore their inter-relationships a little bit more, and a lot more things happen, which television allows you to do. So yeah, the books were helpful, but our job is always to develop the characters, not necessarily try to worry about how closely we follow the books. So far so good, I think. I’m sure I’ll hear from you if it isn’t.

I feel like it’s got to be interesting to film a complete season before it’s released without hearing the fan feedback and having that social media conversation. Not that that should affect how you do anything, but I feel like it’s weird to not have that kind of feedback. Do you feel weird about that? Not having dialogue with fans?

Peter Mensah: Well, yes and no. To some extent, yeah, you sort of worry “hey, I hope we got that right, etc.” But, in lieu of that, what’s happened is that we got excited. So, when nervous morphed into “oh my God, I hope they get to see what we’ve done because this is actually cool.” And so there hasn’t been the feedback, but we’ve had the freedom to just indulge in just telling the stories, and that is actually a great thing too because, to do it, and to be in our tenth episode and be really excited about it says good things. So, I’d say more we’re just waiting for everyone else to enjoy it too.

Peter Mensah: You know what’s funny about that, this is the third character I’ve played with contacts… in “300” I had golden eyes, “Sleepy Hollow” I had yellow and red … and now piercing blue eyes that have this white light layer behind it that actually – it just explodes in my eyesight.

So you’re playing this really menacing, threatening character, but you can’t see a thing. “Where the heck are you? I’ll bite you!” I think we pulled it off though. But also the great thing about that is it makes it really easy to get into character, because it requires a certain amount of focus to just sort of calm yourself and deliver. And so as soon as the lenses go in “okay, this is it, it’s showtime.”