It’s finally making its debut! The Game of Thrones: The Touring Exhibition opens at the historic Museu Marítim in Barcelona, Spain, for a limited engagement on October 28, 2017!

The new 10,000-square-foot interactive experience, inspired by and filled with the breathtaking images and enthralling artifacts from the hit HBO series, will give fans an up-close and personal look at the authentic props, costumes and set decorations from the groundbreaking show. Tickets to this blockbuster event are available at www.gameofthronesexhibition.com.

Game of Thrones: The Touring Exhibition will allow fans worldwide to experience the craftsmanship and artistry of the Game of Thrones production up close in the largest public display to date. Featuring a unique mix of immersive environments, interactives, and multimedia content, visitors will experience the lands of Westeros and Essos and relive the trials and tribulations of the series’ nobles and common folk alike who struggle for survival in the shadow of the Iron Throne.

Several dynamically themed exhibition areas based on series settings will feature displays of costumes, props, weapons and armor in an immersive way:

“From the steps of Dragonstone to the Great Pit of Daznak, the country and people of Spain have played host to some of the most iconic settings in GAME OF THRONES,” said Jeff Peters, vice president of licensing and retail at HBO. “It adds to the excitement that our first location for this exhibition is also in a country where we recently launched a new streaming service, HBO España. We’re confident that our fans in Barcelona, throughout Spain, and across Europe, are going to love this new opportunity to immerse themselves in the world of GAME OF THRONES.”

“We are excited to raise a banner in Barcelona, Spain, the gateway to the Mediterranean, as the location for the global debut of GAME OF THRONES: THE TOURING EXHIBITION,” said Eddie Newquist, chief creative officer and EVP of GES. “The opening in Barcelona will represent the culmination of the collaborative efforts of many talented artisans, designers, and craftsmen to bring this unprecedented collection of the iconic props, costumes and settings to fans worldwide, and we are thrilled to kick off the tour in such a historic location.”

“It is an honor for Sold Out to work alongside Museu Maritim, Encore, GES and HBO to bring to Barcelona the world premiere of the official exhibition based on the great television series GAME OF THRONES,” says Rafael Giménez, director of Sold Out, promoter of the exhibition in Spain. “The cosmopolitan character of Barcelona and the huge fan base of this fantastic television saga in our country are the main reasons to have selected Barcelona as the first city of this great touring exhibition of GAME OF THRONES. The presence in Barcelona of this impressive show undoubtedly contributes to placing the city on the international circuit of major international exhibitions.”

“It is a great pleasure and an honor to be part of this new adventure,” said Pascal Bernardin of Encore. “At last this iconic series is turning into a live exhibition and winter is coming to Barcelona.” 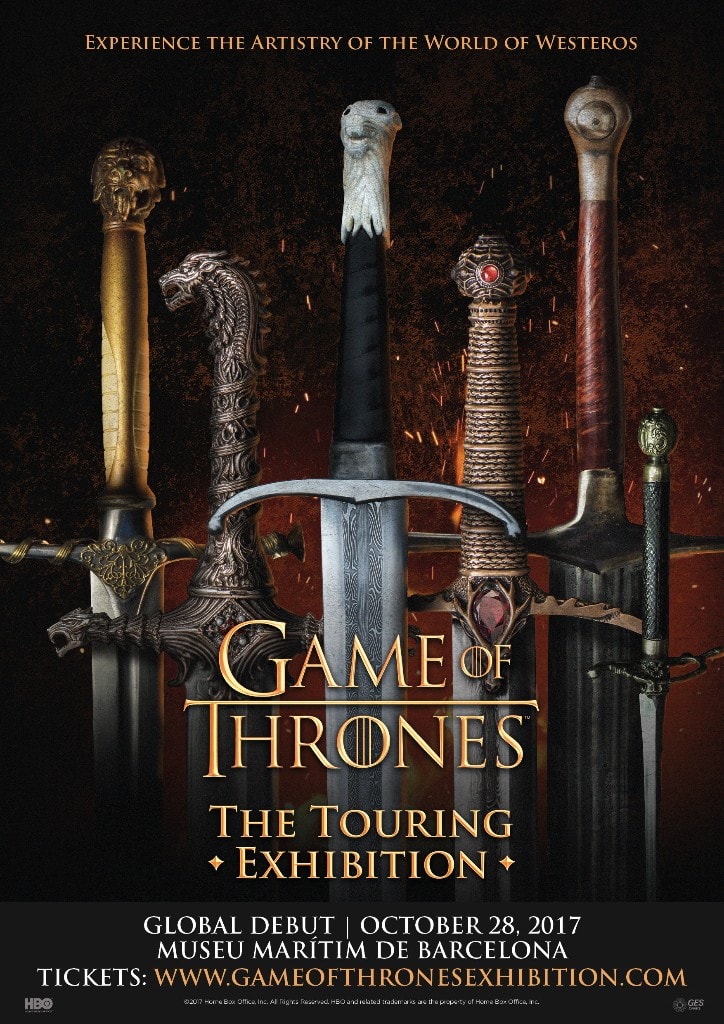 Additional information about upcoming tour stops will be released in the coming months. For more information, please visit www.gameofthronesexhibition.com.

Game of Thrones: The Touring Exhibition in Barcelona Information: